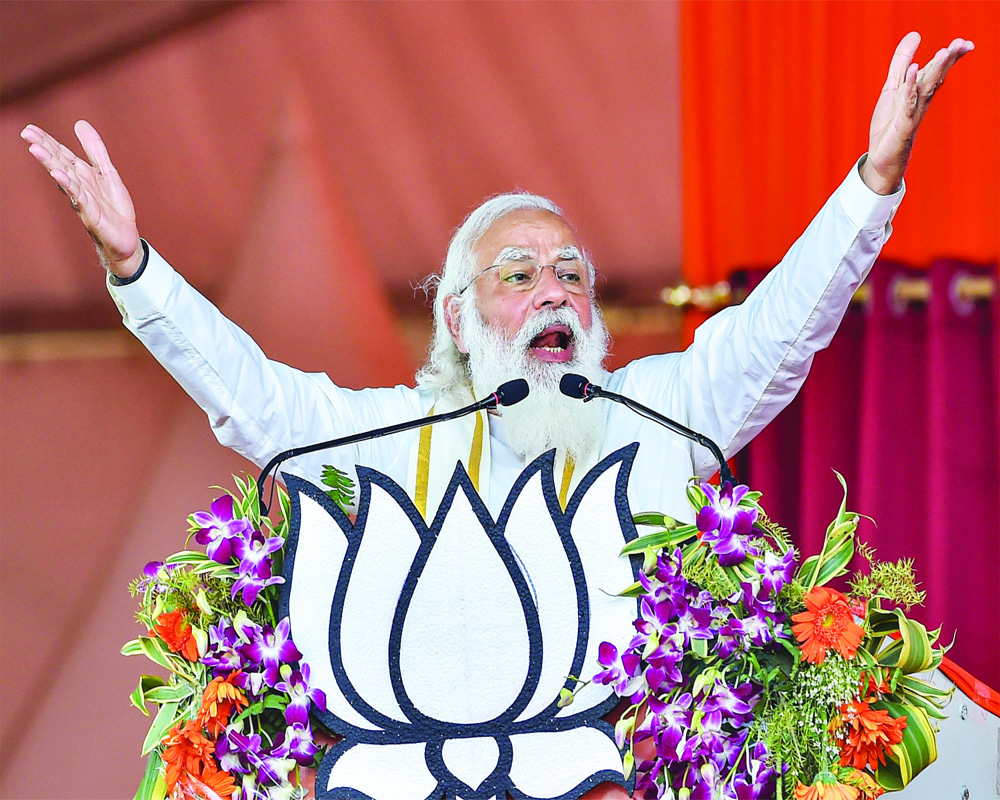 Aamra ashol poriborton chai (we want real change).” That is how Prime Minister Narendra Modi on Monday referred to the political will of the people of an election-bound Bengal.

“The people have made up their mind to bring about the real poriborton… the one that will restore Bengal to its glorious past converting it to the real Sonar Bangla (Golden Bengal),” the Prime Minister told a mammoth rally at Shahganj in Hooghly district about 50 km from Kolkata.

The Prime Minister inaugurated the extension of Metro Railway from Noapara to Dakshineswar and flagged off the first service on this 4.1 km stretch — constructed at a cost of Rs 464 crore — joining the two famous Kali Temples of Dakshineshwar and Kalighat.

The PM used the occasion to launch a scathing attack on the Mamata Banerjee Government for “only perpetrating appeasement politics and doing nothing for the people of the State who brought her to power with great hopes.”

Slamming the alleged “cut-money culture, syndicate raj,” criminalisation of politics and politicisation of administration, the Prime Minister said, “Bengal will continue to lag behind till syndicate raj and cut money culture continues in the State,” reminding how in the past people from other States came to Kolkata for earning their bread “but today the local people have to move out to other States for employment.”

“This situation will not improve till there is a real poriborton,” the Prime Minister said and referred to “little” progress made in the implementation of the Central schemes like “Jal Jeevan Mission” aimed at reaching drinking water lines to every household.

“At a time when other States are implementing the scheme quickly so that their women do not have to go miles away to fetch drinking water and so that all the citizens can get clean potable water free from disease, the Government here is sitting over the scheme,” Modi said.

The PM added that the Centre had sanctioned Rs 1,700 crore for the project targeting 1.75 crore families… but the State has managed to cover only 9 lakh families spending Rs 609 crore. “It has siphoned off the remaining funds,” he said.

Attacking the Trinamool Congress Government for promoting Tolabaji (extortion), syndicate, and cut-money, instead of nationalism, the PM alleged the farmers of Bengal who produce paddy, jute, etc, were being looted.

“There will be no relief for them till we do not set up modern industries like food processing industries,” he said, adding there was an urgent need to modernise infrastructure in the State.

“When I meet Bengali people abroad they say that they want to come and invest here but cannot do so because of cut money culture … even if you go to hire a house you need to pay up cut money here so how can the State develop… for this you need real change,” he said.

“When our party would come to power, we will convert Bengal known for its Tolabaji into Sonar Bangla. We will take quick decisions to ensure steady development,” he said.