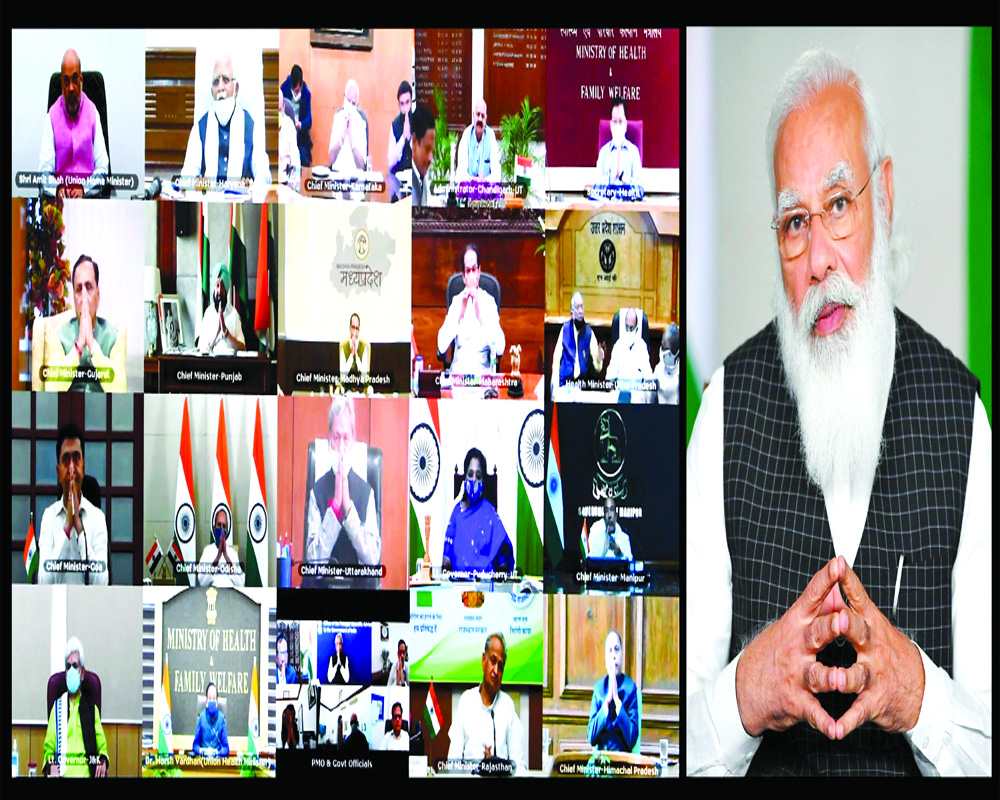 Against the backdrop of a sudden rise in coronavirus cases in many States, Prime Minister Narendra Modi on Wednesday stressed the need for checking the “emerging second peak” of the pandemic in the country and sought States to create micro-containment centres and speed up the vaccination drive.

In the meeting of Chief Ministers called by him to decide new Covid-19 strategy, Modi said, “Test, track and treat mantra” should be followed to combat the “second peak” of the pandemic.

“Seventy districts of the country have seen an increase of more than 150 per cent in the last few weeks. If we don’t stop it here, a situation of a nationwide outbreak can come up,” he cautioned.

Punjab Chief Minister Amarinder Singh sought permission for vaccination of one and all. Karnataka too supported that people in all age-group be vaccinated. West Bengal CM Mamata Banerjee was absent and represented by the State Chief Secretary.

The Prime Minister said vaccination should be speeded up and regretted 10 per cent “wastage” of doses in Andhra Pradesh, Telangana and UP.

“Over 10 per cent vaccine wastage in Telangana and Andhra Pradesh. Vaccine wastage in Uttar Pradesh is almost the same. The State must review why vaccine wastage is happening? Monitoring must be done every evening and pro-active people should be contacted so that there’s no wastage,” he told the Chief Ministers.

Modi said States should be creating micro-containment centres to limit the spread of the virus and pressed the need to increase RT-PCR resting across the country.

Interestingly, new Uttarakhand Chief Minister Teerath Singh Rawat has waved off RT-PCR testing for the Kumbh mela, starting next month at Hardwar, where several lakhs pilgrims are expected to gather amidst the running pandemic.

In his virtual interaction with Chief Ministers, Modi said that the spike in Covid cases in some States such as Maharashtra, Punjab, and Madhya Pradesh was a cause of concern and highlighted that the mantra for the people should be ‘dawai bhi, kadai bhi’.

He asked the States to focus on effective contact tracing and micro-containment zones to control the surge in cases.

“We have to immediately stop the emerging second peak and take big and decisive steps. The self-confidence that we gained in our corona fight should not turn into overconfidence,” the Prime Minister said warning against any carelessness.

Maharashtra, Punjab, Karnataka, Gujarat and Tamil Nadu continue to report a high number of daily Covid-19 cases, accounting for 71.10 per cent of the 28,903 new infections, according to the Union Health Ministry.