No compromise on Article 370, 35A: Gupkar leaders

No compromise on Article 370, 35A: Gupkar leaders 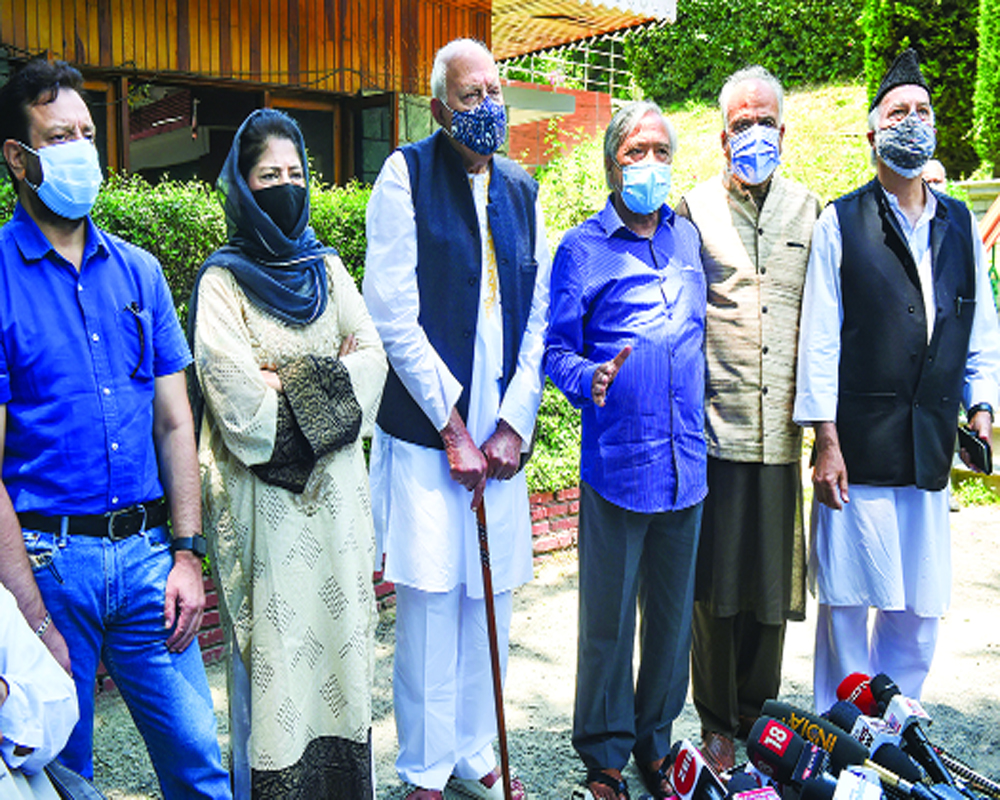 Striking a discordant note ahead of joining the all-party meet convened by Prime Minister Narendra Modi in New Delhi on June 24, the People’s Alliance for Gupkar Declaration (PAGD) on Tuesday announced they will attend the meeting but there can be no compromise on Article 370 and 35A, which granted special status to the erstwhile State of Jammu & Kashmir.

The PAGD leaders, who assembled at the residence of Dr Farooq Abdullah, discussed the contours of the agenda of the June 24 conclave.

After the meeting was over, chairman of the PAGD alliance Dr Farooq Abdullah told reporters, “Mehbooba Mufti, Mohmmad Yusuf Tarigami, and I will attend the all-party meeting called by the PM. We hope to keep our agenda before the PM and the Home Minister”.

Dr Abdullah said, “Our stand is clear and all of you know what our stand is. There is no need to repeat the same. Since New Delhi has invited the leaders individually, we have decided that all those invited will attend the meeting and put forth their points on J&K.”

The chief spokesperson of the PAGD and CPI(M) leader Mohammad Yousuf Tarigami said they will not ask for moon during the meeting with the PM. “We will seek something that is ours and will remain ours,” he said.

PDP chief Mehbooba said during the meeting with the Prime Minister on Thursday, she will press for the restoration of the special status of Jammu and Kashmir which was “snatched away from us”.

She said earlier there was a suggestion that only Dr Farooq would represent PAGD in the June 24 meeting but now there is a consensus that all those who have been invited will go.

“We are not against the dialogue. My late father Mufti Muhammad Sayeed has always advocated dialogue for resolution of issues. I believe New Delhi should have released all political prisoners for creating an atmosphere for talks but it didn’t,” she said.  “Now we will demand the release of political prisoners as there are many who are ill in jails. We will also seek immediate shifting of prisoners back to J&K jails from various Indian prisons,” she said.

Another Gupkar Alliance member, Muzaffar Shah, said, “There can be no compromise on Article 370 and 35A.”

After the Abrogation of Article 370 and 35-A it is for the first time mainstream leaders from Jammu and Kashmir have been invited by the Prime Minister to discuss the political scenario without any pre-conditions.

Meanwhile in Jammu, Ravinder Raina, Jammu and Kashmir BJP chief, welcomed the decision of PAGD leaders to attend the meeting. “We welcome that all political parties are taking part in the meeting. In J-K, due to Pakistan-sponsored terrorism, many innocent people have lost their lives. The PM has called for an all party meet. It’s our responsibility to put forth the aspirations of the people of Jammu and Kashmir before him,” he said.

“A meeting of all senior leaders of J&K BJP was also held at its party office on Tuesday to discuss various issues that will be taken up in the meeting on June 24,” he added.