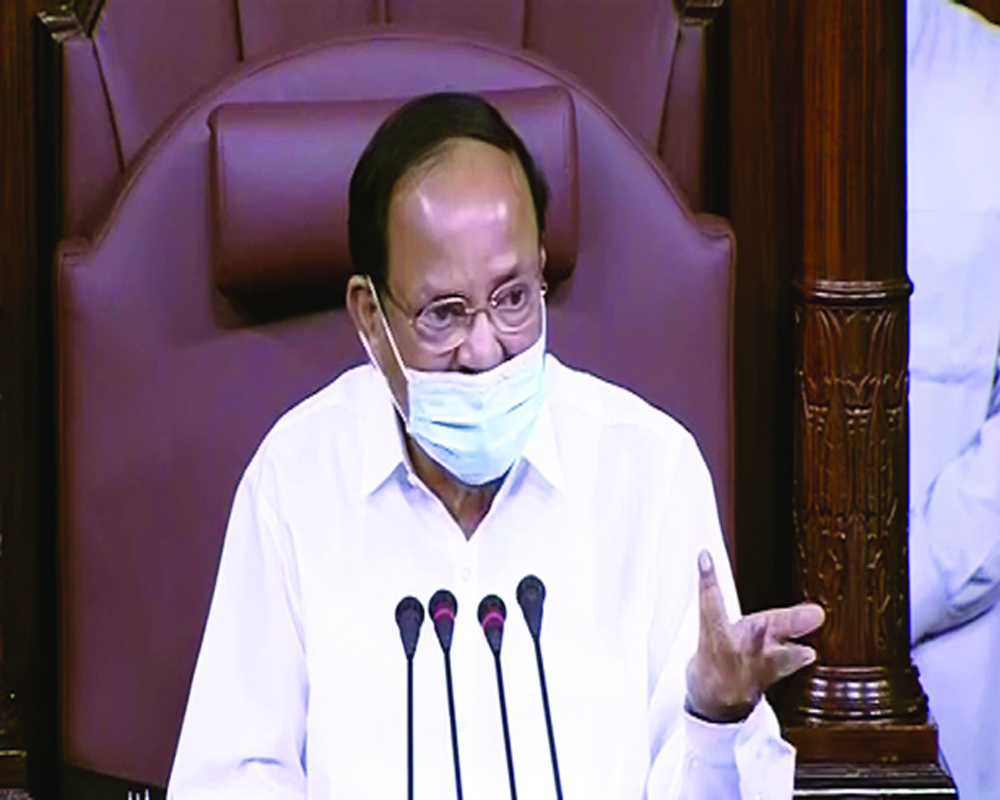 The Pegasus snooping scandal continued to derail the proceedings of Parliament. Both Houses on Friday saw slogan-shouting and repeated adjournments even as the Rajya Sabha suspended TMC MP Santanu Sen who on Thursday snatched a statement read out by Information Technology Minister Ashwini Vaishnaw and tore it off.

The MP has been suspended for the remaining period of the ongoing Monsoon Session.

The strong action against Sen took place after a motion moved by the Government was passed by the House soon after it met for the day. However, the TMC MP refused to leave the House and kept sitting despite repeated pleas by Chairman M Venkaiah Naidu and Deputy Chairman Harivansh. As a result, the House could not function and was adjourned repeatedly.

In a tweet, Sen termed his suspension as “unparliamentary” and said his party’s voice and its leader’s voice cannot be stopped.

The Government made its intentions clear and soon after the obituary references and laying of papers, Minister of State for Parliamentary Affairs V Muraleedharan moved a motion for Sen’s suspension.

“I move that Dr Santanu Sen, AITC, be suspended from the services of the House...for his unruly behaviour, unbecoming of a member of the Rajya Sabha, yesterday...” Muraleedharan said in his motion. It was passed by a voice vote and Naidu asked Sen to leave the House.

However, the TMC members protested and raised objection to the manner in which the motion was brought without listing it in the day’s business.  Sukhendu Sekhar Ray (TMC) said the moving of the motion was not mentioned in the revised list of business.

Naidu said he had approved the motion to maintain the dignity of the House.  Roy’s party colleague Derek O’Brien claimed a Minister behaved aggressively after the House was adjourned on Thursday.

Sensing the mood of the House, the Chairman adjourned it till 12.00 pm after Sen’s suspension. The agitated members did not allow the House to run when the House met again and despite repeated pleas by Harivansh, Sen did not go out of the House.

The Deputy Chairman first adjourned the House till 12.30 pm and then till 2.30 pm as the TMC protested.

Meanwhile, the Lok Sabha proceedings were adjourned for the day following disruptions by Opposition parties which raised slogans on the Pegasus snooping row and the farmers’ issue by gathering in the Well of the House.

As soon as the House met for the day at 11 am, some Opposition members rushed to the Well but they were prevented from doing so by floor leaders of their respective parties as Speaker Om Birla wanted to make observations on the Indian squad participating in the Tokyo Olympics.

Birla extended best wishes to the Indian contingent on behalf of the House. The mega carnival of sports is from Friday. Members thumped benches in support of the Indian squad.

Soon after Birla had made his observations, several members from the Congress, the Trinamool Congress and the Shiromani Akali Dal gathered in the Well of the House raising slogans and holding placards. The TMC shouted slogans demanding details of the money allegedly spent by the Government on Pegasus spyware. Congress members had placards demanding a Supreme Court monitored judicial probe into the Pegasus allegations.

Slogans included “jasoosi karna band karo” (Stop indulging in spying). As disruptions continued, the Speaker adjourned the House till 12 noon at 11.20 am.

As the House reassembled at 12 noon, Kirit Solanki, who was in the Chair, asked protesting members to take their respective seats. During the brief period for which the House functioned, resolutions were passed to appoint and elect new members in various parliamentary panels as some of the members have become ministers in the recent reshuffle of the Union Council of Ministers.