Quad vows to save Indo-Pacific region from China’s coercion

Quad vows to save Indo-Pacific region from China’s coercion 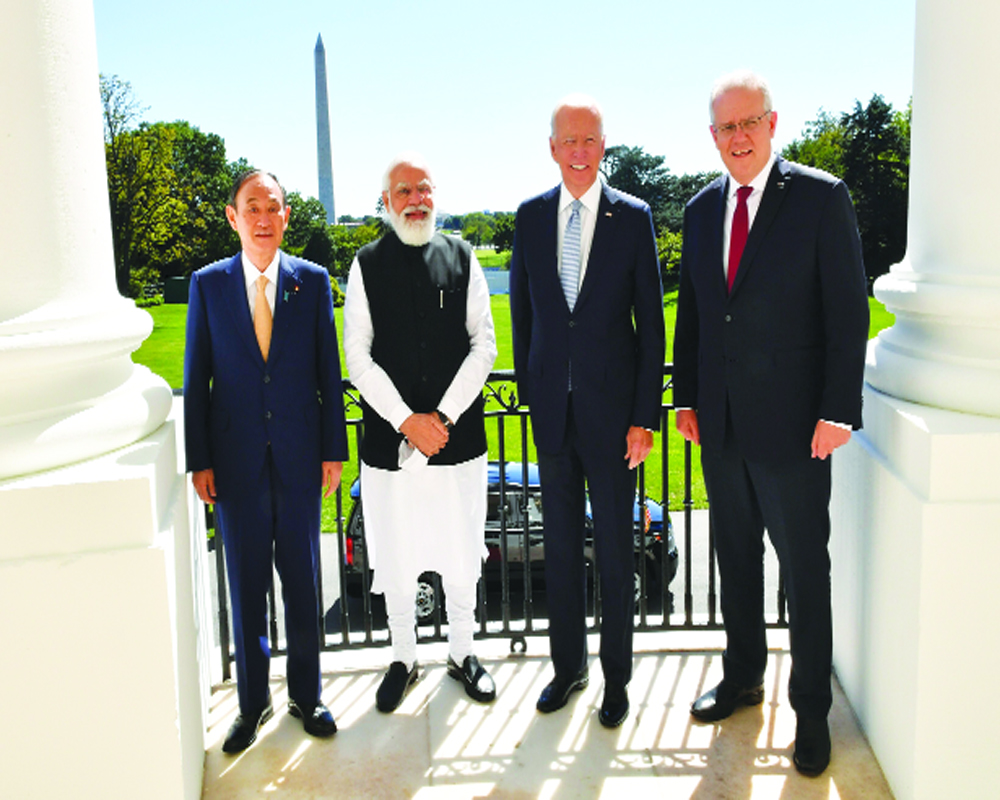 India, US, Japan, Oz talk about combating terrorism in Af

Faced with growing assertiveness by China in the Indo-Pacific region, India, US, Japan and Australia resolved to resist any “coercion” and work together for ensuring peace and prosperity in the region and the world as a whole.

The four nations forming the Quad grouping also agreed to coordinate their policies towards Afghanistan and further deepen counter-terrorism and humanitarian co-operation in the months ahead in accordance with a UN Security Council resolution.

“We reaffirm that Afghan territory should not be used to threaten or attack any country or to shelter or train terrorists, or to plan or to finance terrorist acts, and reiterate the importance of combating terrorism in Afghanistan.

“We denounce the use of terrorist proxies and emphasised the importance of denying any logistical, financial or military support to terrorist groups which could be used to launch or plan terror attacks, including cross-border attacks. We stand together in support of Afghan nationals, and call on the Taliban to provide safe passage to any person wishing to leave Afghanistan, and to ensure that the human rights of all Afghans, including women, children, and minorities are respected,” the joint statement released after the summit said.

This was major outcome of first in person summit between the Quad countries comprising India, US, Japan and Australia in Washington on Friday. The heads of state of these countries, including Prime Minister Narendra Modi, President Joe Biden, Australian Prime Minister Scott Morrison and Japanese Prime Minister Yoshihide Suga held talks for more than two hours. The summit was hosted by Biden.

Besides pledging to ensure peace and security in the Indo-Pacific, the four nations announced a slew of new initiatives to take on common challenges, amidst muscle flexing by an assertive China in the strategic region.

In a way, Quad would play the role as “Force for Global good,” Modi said in his short address and exuded confidence that this cooperation by the four democracies will ensure peace and prosperity in the Indo-Pacific region and the world.

Modi was the first leader invited by host President Joe Biden to address the first in-person Quad gathering in the East Room of the White House.

Opening the summit, Biden said the four democracies have come together to take on common challenges from Covid to climate. “This group has democratic partners who share world views and have common vision for the future,” he said.

“When we met six months ago, we made a concrete commitment to advance our shared positive agenda for free and open up the session. Today, we are proud to say that we’re making progress,” Biden said.

Australian Prime Minister Scott Morrison and his Japanese counterpart were the two other leaders in the historic East Room.

The vaccine initiative is on track, Biden said, adding that the Quad is taking action on climate change with a new partnership for zero emission shipping.

“Today, we’re also launching a new quad fellowship for students from each of our five countries to pursue advanced degrees in leading science, technology engineering, and mathematics (STEM) programmes through the United States,” Biden said. The four countries have a long history of cooperation. “We know how to get things done. And we are up to the challenge,” he added.

Thanking Biden for his initiative to organise this historic first ever in-person Quad Summit, Modi said the four countries came together for the first time in 2004 to extend support to the Indo-Pacific Region.

“Today, when the world is grappling with the Covid-19 pandemic, we are meeting once again as Quad and working in the interest of humanity,” he said. The Quad vaccine initiative is going to provide a great help to the nations in the Indo-Pacific region,” he said.

“Based on our common democratic values, Quad has decided to move forward with positive thinking,” he said. Be it supply chain or security, be it climate action or Covid response, or cooperation in the field of technology, Modi said he would be very happy to talk to the leaders at the meeting.

Morrison said the Indo-Pacific region should be free from coercion and disputes should be solved in accordance with international law, in a veiled reference to China.

“We believe in a free and open Indo Pacific, because we know that the limits are strong, stable, and prosperous freedomâ€¦to realise their hopes and dreams to live in a liberal free society,” he said.

Observing that there is no part of the world that is more dynamic than the Indo-Pacific at this time, a region that has extraordinary opportunity, Morrison said there are many challenges that must be overcome.

Suga also stressed the importance of the first ever in-person Quad Summit, saying “this event demonstrates strong solidarity between our four nations and an unwavering commitment to a free and open Indo-Pacific”.

“It gives me great pleasure to discuss with my friends wide ranging topics from supply chains to global security, from climate action to Covid response, to cooperation in the field of technology. A Quad, in a sense, will play the role of a force for global good. I’m confident that our cooperation, under Quad, will ensure prosperity and peace in the Indo Pacific and in the world,” Modi said.

The joint statement released after the summit said it is an opportunity to refocus “ourselves and the world on the Indo-Pacific and on our vision for what we hope to achieve. Together, we recommit to promoting the free, open, rules-based order, rooted in international law and undaunted by coercion, to bolster security and prosperity in the Indo-Pacific and beyond.”

On the new initiatives, the statement said, “We begin new cooperation in cyber space and pledge to work together to combat cyber threats, promote resilience, and secure our critical infrastructure. In space we will identify new collaboration opportunities and share satellite data for peaceful purposes such as monitoring climate change, disaster response and preparedness, sustainable uses of oceans and marine resources, and on responding to challenges in shared domains. We will also consult on rules, norms, guidelines and principles for ensuring the sustainable use of outer space.”

The four nations also reaffirmed their commitment to the complete denuclearisation of North Korea in accordance with United Nations Security Council resolutions, and also confirm the necessity of immediate resolution of the issue of Japanese abductees. The Quad urged North Korea to abide by its UN obligations, refrain from provocations and engage in substantive dialogue.