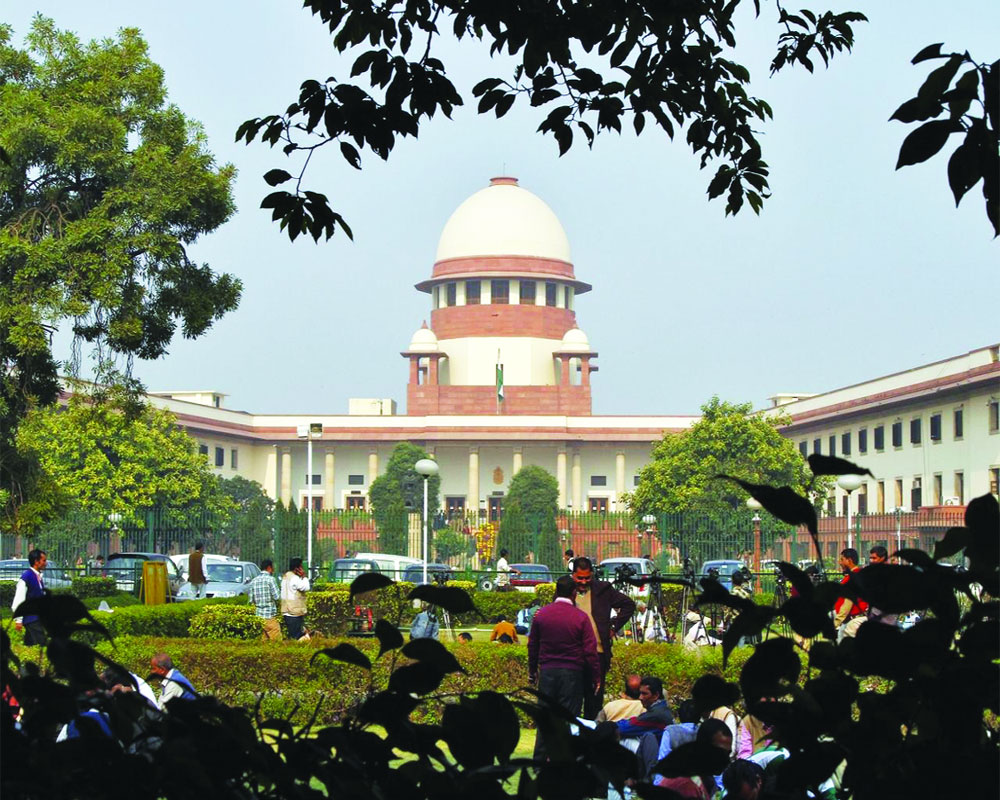 In a significant development, the Supreme on Friday stayed the proceedings before the Kerala High Court on a plea challenging the Centre’s decision to grant 10 per cent reservation in jobs and admissions to candidates of the economically weaker sections (EWS).

The SC also set aside Madras High Court’s observation that the Centre must seek top court’s approval on EWS reservation. The apex court’s benches were issuing orders on the transfer of cases in EWS in several high courts to the Supreme Court.

In the case of Kerala HC, a  bench comprising Chief Justice N V Ramana and Justices Surya Kant and Hima Kohli issued notice on the plea filed by the Centre seeking transfer of the case from the high court to the apex court which had earlier referred to the similar case for adjudication to a five-judge Constitution bench.

Solicitor General Tushar Mehta appeared for the Centre and sought stay on the proceedings before the high court beside a notice to Nujaim PK who had filed the PIL there.

“Writ Petition involves an identical question of law to one pending before this court, whether the Constitution (One Hundred and Third Amendment) Act, 2019 violates the basic structure of the Constitution of India and is against the basic principle of the constitution,” said Centre’s plea seeking transfer of cases to the apex court.

The transfer of the aforesaid writ petition would enable all these cases to be clubbed and heard together and avoid the possibility of inconsistent orders being passed by different courts,” it said.

The top court had earlier referred to the five-judge  Constitution a batch of pleas and transfer petitions challenging the Centre’s decision to grant 10 per cent reservation in jobs and education to economically weaker sections and the Act.

The court had refused to stay the Centre’s decision. The Lok Sabha and Rajya Sabha cleared the Bill on January 8 and 9, 2019 respectively and was signed by President Ram Nath Kovind. The quota will be over and above the existing 50 per cent reservation to Scheduled Castes, Scheduled Tribes, and Other Backward Classes.

Setting aside Madras High Court’s recent observation that the Centre’s notification on grant of 10 per cent quota to the EWS in all-India quota (AIQ) seats of medical colleges would require approval of the top court, another bench headed by    Justice DY Chandrachud made it clear that it is not quashing the entire High Court order passed on August 25 or stating any opinion on its merit but just setting aside the observations made with regard to top court’s approval on EWS quota.

The bench of Justices  Chandrachud and B V Nagarathna said the High Court should not have expressed such an opinion while hearing a contempt petition filed by the ruling DMK party in Tamil Nadu and it has “transgressed its jurisdiction”. It said, “What the Madras High Court has done is that it has asked the Centre to seek approval of a five-judge bench which will be hearing a challenge made to the validity of 103rd constitutional amendment providing 10 per cent EWS quota.  The High Court cannot transgress its jurisdiction while hearing a contempt petition,” it said.