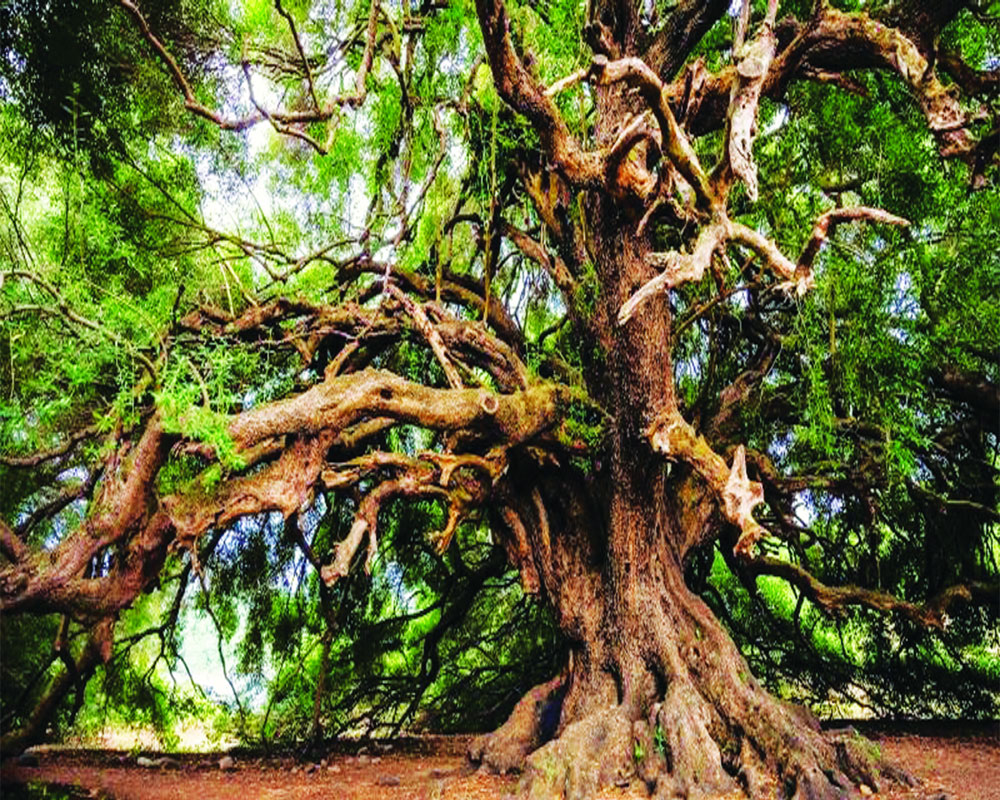 In a first-of-its-kind initiative in the country, the Manohar Lal Khattar Government in Haryana will dole out pension to trees older than 75 years, recognising them as living entities and not just an economic commodity.

and security to people post-retirement. The Haryana Government, however, went a step ahead to identify, protect and provide financial aid to the old trees on its land.

Under its pension scheme named “Pran Vayu Devtaa Pension Scheme”, any tree that has attained an age of 75 years or more will be given Rs 2,500 per year as a token of honour for the service it has rendered to humanity and the environment. The State Government will also give “heritage”

status to the trees that are over 75 years old.

Not only this, the pension amount under the scheme will be increased in the ratio as provisioned in the old age pension scheme in the state.

Chief Minister Manohar Lal Khattar had announced the tree pension scheme on the occasion of World Environment Day on June 5. The scheme acknowledges how the decades-old trees function as critical habitat for a wide array of species in ecosystem.

According to the State’s Forest Department, there are at least 2,500 trees in Haryana that have attained an age of 75 years or more.

The draft rules assert that not only are trees essential for life by producing oxygen but as the longest living species on earth, they give us a link between past and present. At a large number of places in the State, the decades and centuries old trees are considered prominent landmarks and also memorial to historical figures or national events.

Once a tree is notified as “heritage” in the State, any person or organisation that cut, fell or cause any damage to the heritage tree will be liable for punishment with a fine which may extend to Rs 500 or with imprisonment for a term which may extend to one month or both, as per the provisions of draft Heritage Tree Rules.

VS Tanwar, Principal Chief Conservator of Forest, Haryana told The Pioneer, “Pran Vayu Devtaa Pension Scheme”, a brainchild of Forest Minister Kanwar Pal Gujjar aims at protecting old trees for their natural and cultural significance. Despite their significant role in the ecosystem, the decades-old trees are often overlooked in habitat conservation programmes.”

Elaborating about the tree pension scheme, Tanwar said the pension amount of Rs 2,500 per year will be given to the owner of the heritage tree that is above 75 years old. This scheme would be applicable to all such trees on private and Government land up till the life period of that heritage tree. For instance, if such a tree is identified in panchayat land, then the sarpanch of the panchayat will be given the pension amount for the care and maintenance of the tree.

On how the pension amount is proposed to be spent, the PPCF said the concerned authority or owner can use the said amount for beautification of the tree, installing information plates or grills, making sitting arrangements under the tree, treating the tree for fungal infection among other purposes.

As per the estimates, there are at least 2,500 such trees, which are 75 years old or more in Haryana. After the State Government gives final approval to the scheme, the Forest Department plans to carry out a fresh survey to identify such old trees and notify them as ‘heritage’ trees across the state, he added.

About the draft state’s Heritage Tree Rules 2021, the PCCF said the draft rules have provisions, including criteria for declaring a tree as heritage tree, restrictions of felling of heritage trees, incentives for heritage trees and penalty for damaging such trees.

According to the proposed rules, a tree shall be declared as heritage tree if it is more than 75 years old which can be gauged from its profile and girth of trunk or as assessed by the old age villagers; a tree species which is reported for the first time in the state or is endemic or rare in nature; tree that has historical, mythological, religious, cultural significance; or a curious cluster of trees like a set of banyan tree among other criteria.

For the protection and conservation of heritage trees, the rules also proposed that no concretization of base shall be permitted around the Banyan Tree and Peepal Tree below its crown and up to a diameter of ten meter in other tree species in the State.

Apart from launching the pension scheme for trees, the State Government has also planned to establish Oxy Vans or Oxy Parks, a concept envisioned keeping in view the severe crisis of medical oxygen during the second wave of Covid-19 in Haryana.

Talking about the initiative, the PCCF VS Tanwar said recognising the dire need to protect the trees and ecosystems, this initiative has been taken up to give back to nature. Oxy Van will be developed covering five to 100 acres of area in each cities and villages of the state.

The State Government has proposed to utilise 80000 acre of panchayat land for development of Oxy Van in Haryana.