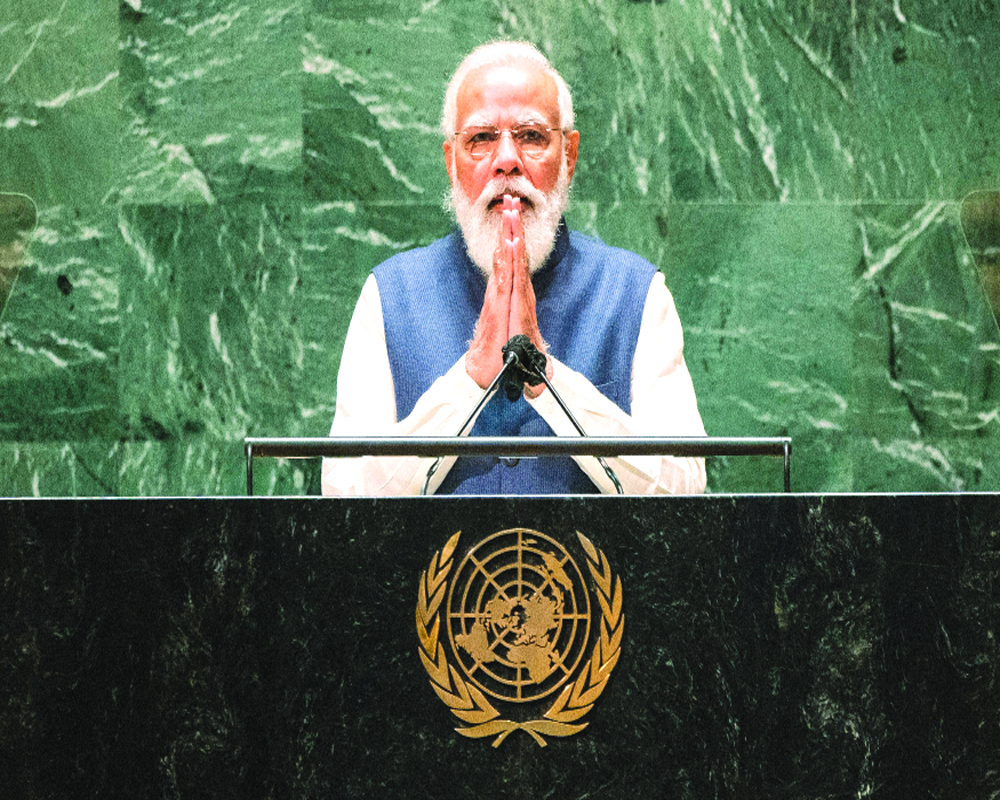 Ocean laws should not be abused, shun terror as state policy, says PM

Prime Minister Narendra Modi on Sunday targeted Pakistan and China in his address to the United Nations General Assembly (UNGA) by saying that Afghanistan should not be used by some countries for terrorism and that ocean laws be used and not abused as he sought the world body to increase its relevance and effectiveness on issues like terrorism and proxy-war.

The Prime Minister addressed the 76th session of the United Nations General Assembly at New York as the first speaker among the world leaders gathered there.

While attacking Pakistan without naming it, the Prime Minister sought to contrast the neighbouring country’s “regressive thinking” of using “terrorism as a political tool” with India’s scientific and progressive advancement that is not only helping it but also the world at large.

He said when Indian students in the 75th year of country’s independence are readying up to send 75 satellites in space, the other side is going backwards and resorting to terrorism.

“Countries with regressive thinking that are using terrorism as a political tool need to understand that terrorism is an equally big threat for them. It has to be ensured that Afghanistan isn’t used to spread terrorism or launch terror attacks...” said Modi, in a warning to Pakistan.

The Prime Minister in his speech delivered in Hindi interspersed with a  “Sanskrit slok” of  “Chanakya”, the ancient Indian political scientist, and a quote of nobel laureate Rabindranath Tagore in Bengali to convey to the UN that it needs to take timely and effective steps to counter threats emanating from terrorism and  regressive ideologies.

Focussing on Afghanistan, the Prime Minister referred to “Afghan women, children and minorities” saying “they need help” and “we will have to share responsibility”.

Modi said the entire world should use science-based rationale and progressive thinking as a medium of development.

Without mentioning Chinese attempt to monopolise the South China Sea and use its muscle to regulate it in its favour, the PM said ocean resources be used and not abused” and that they are  life-time and belong to  one and all.

“Our oceans are also our shared heritage. That is why we have to keep in mind that we use our ocean resources, not abuse them. Our seas are a lifeline to international trading. We need to protect them from expansion and exclusion. World communities must unitedly raise their voice to strengthen rule-based world order,” said Modi.

He spoke about “rule-based navigation” and urged the members of the UN body “to speak in one voice” about maritime security.

“We have to protect our oceans are lifeline of international trade. We have to protect them from race for expansionism and exclusion. The world will have to raise collective voice against such moves for a rule-based world order,” he said.

China claims nearly all of the disputed South China Sea, although Taiwan, the Philippines, Brunei, Malaysia, and Vietnam all claim parts of it. It has built artificial islands and military installations in the South China Sea and also has territorial disputes with Japan in the East China Sea.

Modi said that it is essential to strengthen the United Nations to protect the global order, global laws and global values.

In mid-way his address, the Prime Minister quoted “Chanakya” of the book “Arthshastra” fame, saying if one does not act in time on an issue, the time itself finishes it’s relevance and asked UN to “increase its effectiveness and reliability” as he said many questions are being raised against it.

Prime Minister quoted Tagore to direct the world-body to act  “fearlessly” which would remove all doubts about its actions.

Modi said that the dangers of regressive thinking and extremism are increasing in the world.

“In these circumstances, the whole world has to make science-based, rational and progressive thinking, the base of their development programmes,”

Earlier, the Prime Minister prefaced his address by saying he represents a country “known as “mother of democracy” with a 1000 years heritage of democratic system, values and immense cultural diversity.

Modi thereafter spoke about humongous challenge thrown by Covid19 and the deaths and suffering caused by it around the globe. He paid his tributes to those who lost their lives in last one and a half year.

“For the last 1.5 years, the world has been grappling with the worst disease in 100 years,” he said and detailed India’s contribution to help-out civid19 situation around the world and it’s production of vaccines.

While stressing that democracy is “the best”, he said,  “The strength of our democracy is demonstrated by the fact that a little boy, who was helping his father at a tea stall in India, is addressing the UNGA for the fourth time as Prime Minister of India”.

“Powerful and impactful address by PM @narendramodi to the UN General Assembly today. 12 big policy takeaways: 1. Representing the Mother of Democracy and based on his own experiences, PM affirms that democracy can deliver, democracy has delivered”, he tweeted soon after Modi’s address.

Modi met Indian diaspora outside his hotel at New York before leaving for the John F Kennedy International Airport from where he departed for India.