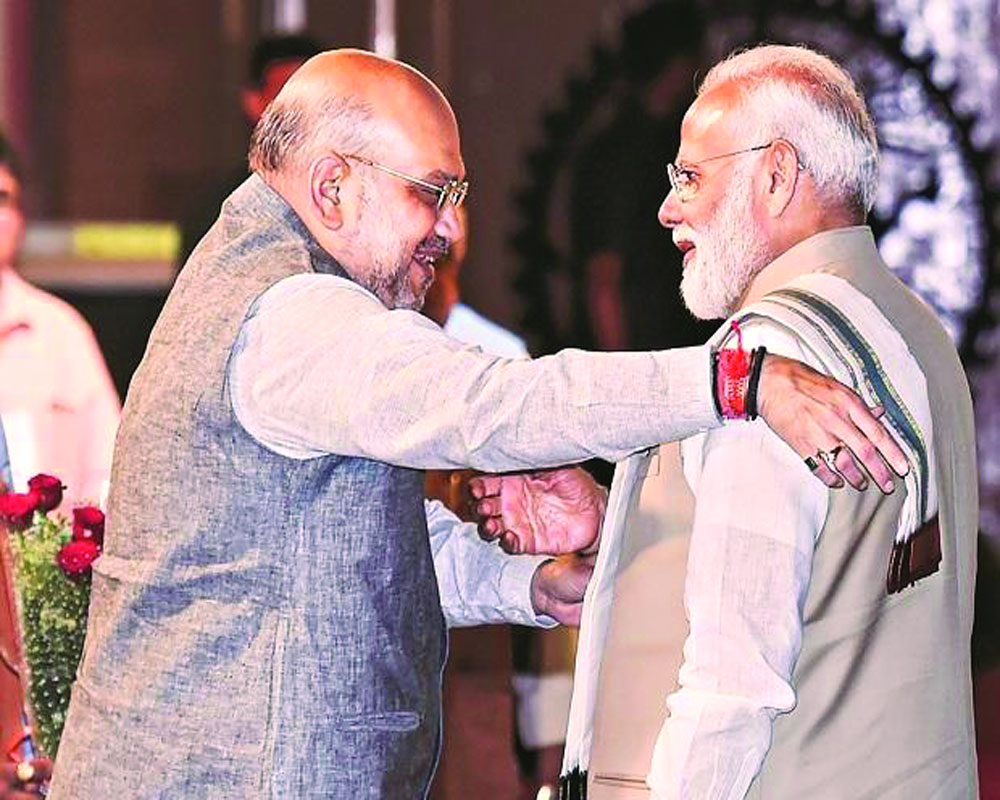 Describing Prime Minister Narendra Modi as the “biggest reformer” and “unparalleled listener” and a democrat, Union Home Minister Amit Shah on Sunday said that he made a “new model of development” that “‘echoes” from Gujarat to Delhi and slammed the Opposition for trying to bring the Prime Minister down and portraying him as a dictator.

Shah said that the goal of Modi is not to stay in power but to change the country.

Describing Modi as the biggest reformer, Shah said in a TV interview that the Prime Minister made a new model of development that echoes from Gujarat to Delhi.

Heaping praise on the Prime Minister, the former BJP president said as a Chief Minister of Gujarat Modi had shown that the multi-party system can work effectively and efficiently in India. Shah said it was Modi who by his efforts overcame the water crisis in Gujarat and ended “tanker Raj” in the State.

Shah spoke at length about Modi’s achievements as CM and PM, and also slammed the Opposition for trying to bring Modi down. When asked if criticism affects Modi, Shah said, “He (PM) only gets stronger as more and more criticise him”.

When asked about his comments on the perception that Modi does not listen to anyone and takes all decisions by himself in a way a dictator would do, Shah said “ I am fortunate to work with him both when he was CM and now as PM and I have not seen a better and calm listener than him, in all the meetings he listens for long and does not speak at all.. and then decides”.

“Sometime I myself think where is the need for so much discussion...”, said the senior BJP leader and rejected as “completely baseless the view that Modi is dictatorial.

“Leadership is the biggest quality in PM Modi”, said Shah.

“Modi gives importance to quality suggestions, not to persons giving the suggestions”, he added.

During the interview, Shah  time and again sought to emphasise on  the country’s ‘economic growth’ under Modi’s regime and pointed-out Gujarat model of development and how Modi gave a model for others to learn from.

“Modi ji takes decisions by taking risks. Our aim is to spur change in the country. The world’s largest democracy with a population of 130 crores has to be taken to a respectable place in the world”, he said.

He said that Modi works for the poor, while the Opposition sits in power by making discontent inside the political capital. “After nearly 27 years of Left rule in Bengal, see the State’s situation, and compare it with Gujarat”, he said.

“Modi Ji’s public life can be divided into three parts. First- as a General Secretary(Organisation)after joining the BJP. Secondly- as the Chief Minister of Gujarat. Third- As Prime Minister in national politics. As the General Secretary(Organisation)of Gujarat, he set an excellent example of how the credibility of one party can be built in the public mind. Within a year of becoming a Union Minister, the BJP began Gujarat Yatra. In 1990 we had a 50 percent stake in the government. In 1995, we had an absolute majority and from there till date, the BJP has not looked back”, said Home Minister.

Shah further said after becoming the Chief Minister Modi understood the nuances in the administration with great patience, associated experts with the administration, and took the government’s plans to the people.

His hard work, meticulous planning, a tenacity for implementation made the BJP stand out.

He further said in the interview “During Modiji’s successful Chief Ministership, there was a ray of hope not only in Gujarat but across the country that “there is no flaw in the Multiparty Democratic System. It can be successful, it can deliver and can go to the last person.”

He said unlike previous Congress regimes, Modi took decisions and “problems are addresses”, “Who would have thought that India can go for air strike” ?”, asked Shah without referring to Bakakot strike by Indian air force.