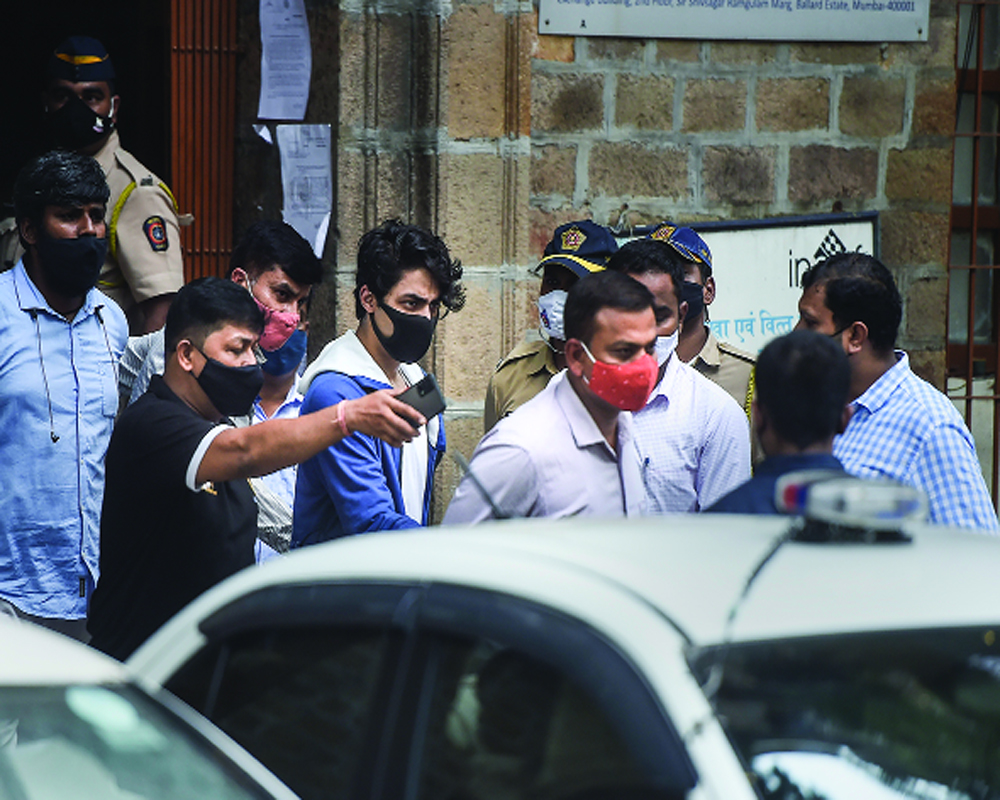 Five days after they were arrested in the mid-sea drug bust case, a Mumbai Esplanade Court on Friday rejected the bail pleas of Bollywood superstar Shah Rukh Khan’s son Aryan Khan and two others on the grounds of maintainability.

Accepting the NCB’s contention that only a special court had jurisdiction to hear the matter and not the Magistrate, Chief Metropolitan Magistrate (CMM) RM Nerlikar rejected the bail applications of Aryan, Arbaaz Merchant and Munmun Dhamecha, who were among the eight persons arrested from the Goa-bound Cordelia Cruises’ Empress ship on October 3.

Aryan and two others will have to apply for bail before the Special NDPS court on Monday.

The rejection of bail applications of Aryan and two others came a day after a Mumbai Magistrate’s court remanded him and seven others in the drug bust case to 14 days’ judicial custody.

Aryan and five other accused, including Arbaaz Merchantt -- who were earlier lodged at the NCB’s make-shift lockup -- will have to spend their weekend at the Arthur Road Central Jail, while the two women accused Munmun Dhamecha and Nupur Sarika are being lodged at Byculla Women’s Jail.

Twenty-three-year-old Aryan and seven others were initially detained on Saturday night and later arrested on Sunday, after the NCB officials busted a rave party and seized 13 grams of cocaine, 5 grams of MD (mephedrone), 21 grams of charas, 22 pills of MDMA (ecstasy) and Rs 1.33 lakh in cash from Goa-bound cruise ship off the Mumbai coast here.

The NCB has so far arrested 17 persons, including eight persons arrested initially, in connection with the busting of a rave party.

“I am a 23 yr old with no prior antecedents. I am from a respectable family, my parents, Siblings are here. I hold an Indian passport. I have roots in society, cannot abscond. There is no question of tampering of evidence or accused. The electronic evidence is taken, the other accused are in custody,” Maneshinde told the court on behalf of Aryan.

On the issue of maintainability of the bail plea, Maneshinde told the court, “There is no prohibition on the Magistrate (to hear bail plea) because this court is covered by CrPC and the magistrate has jurisdiction to try several offences”. He cited the judgement in the Sanjay Malshe vs State of Maharashtra case to substantiate his case.

Maneshinde told the Magistrate’s court that the power to grant bail is inherently provided in Section 437 of the Code of Criminal Procedure.

“Kindly see sub-section 5 of Section 36. Offences punishable for more than 3 years… will be tried summarily. Who will try? Magistrate court. Section 437 of CrPC, the powers to grant bail is inherently given in CRPc,” he said.

Placing his arguments seeking bail for Aryan on the basis of merit,  Maneshinde reiterated that no drug had been recovered from his client. “The High Court has granted bail for small quantity, I have been found with nothing. Not even one gram, nothing”.

On its part, the NCB earlier challenged the maintainability of the bail pleas Aryan and two other accused.

Making a strong case for the court hearing first on the issue of maintainability before hearing on merits on plea, Additional Solicitor General Anil Singh told Maneshinde, “We are raising an issue on maintainability. So answer that first,”

Not agreeing to Maneshinde’s contention that all arguments could be made together, the ASG told the court: “No that cannot be. Once maintainability is raised, then that has to be heard first”.

Though the Magistrate initially said the issue of maintainability could be raised along with the reply on merits and there was no requirement for a separate application, the ASG insisted that the Sessions court has to hear the bail application in view of the facts of the case

“If there are 10 accused in one offence, same FIR, even if one accused is found with small quantity, and others not, then there cannot be segregation, and the sessions court is supposed to hear,” the ASG told the court.

Dwelling upon the issue of maintainability, the NCB told the court, “The jurisdiction of this court is within the confines of Section 36A of the NDPS Act. It is the prosecution’s case that all persons arrayed in the crime are alleged to have committed offences exclusively triable by special court of sessions.”

The NCB went onto to cite the Bombay High Court verdict in  Rhea Chakraborty v. Union of India in which the court had held that all offences under the NDPS Act are non-bailable and cognisable in nature.