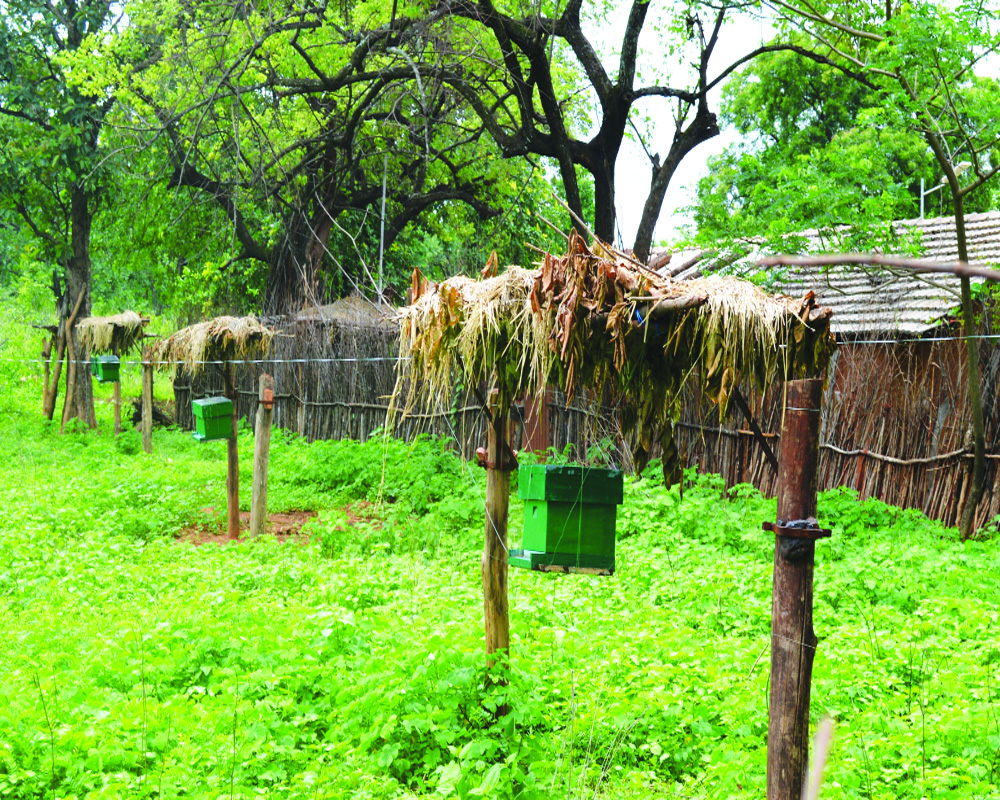 Tiny honey bees can play a big role in averting man-elephant conflict by keeping the pachyderm at bay.

The largest animal on the land is so terrified of the tiny insect that it will flap its ears, stir up dust, make noises, and leave when it hears the buzz of bees.

“Elephants are scared of bees and this has been proved in researches done across the world,” says KVIC Chairman Vinai Kumar Saxena.

The pilot project was launched at four locations around village Chelur in Kodagu district of Karnataka. These spots are located on the periphery of Nagarhole National Park and Tiger Reserve and are known to be human-elephant conflict zones. The total cost of the project is just `15 lakh.

The project RE-HAB is a sub-mission of KVIC’s National Honey Mission. This will also help to reduce fatalities of humans as well as retaliatory death of elephants by humans.

Earlier, Central Bee Research and Training Institute, Pune, which is a unit of KVIC, had conducted field trials of creating “bee-fences” in Maharashtra to mitigate elephant attacks. Northeast Frontier railway also used the sound of honeybees downloaded from the internet to keep elephants away from the railway track to bring down the elephants’ death.

“KVIC has set up 15-20 interspersed bee boxes at each of the four locations. The bee boxes are set up in the passageways of elephant-human conflict zones to block the entrance of elephants to human habitations. The boxes are connected with a string so that when elephants attempt to pass through, a tug or pull causes the bees to swarm the elephant herds and dissuade them from progressing further,” he said.

Saxena further said bee boxes have been placed on the ground as well as hung from the trees to block the passageway of elephants.

High resolution, night vision cameras have been installed at strategic points to record the impact of bees on elephants and their behaviour in these zones.

He said that it has been scientifically recorded that elephants are annoyed and even frightened of honeybees. Elephants fear that the bee swarms can bite their sensitive inner side of the trunk and eyes. “The collective buzz of the bees is so annoying to elephants that force them to return. Elephants, who are the most intelligent animal and carry their memories for long, avoid returning to the place where they have encountered honeybees,” he said.

“The biggest advantage of project RE-HAB is that it dissuades elephants without causing any harm to them. Besides, it is extremely cost-effective as compared to various other measures like digging trenches or erecting fences,” Saxena added.

As per the Ministry of Environment and Forest data, nearly 500 people die every year due to elephant attacks in India. This is nearly 10 times more than the fatalities caused by big cats across the country. From 2015 to 2020, nearly 2,500 people lost their lives in elephant attacks. Out of this, nearly 170 human fatalities have been reported in Karnataka alone. On the contrary, nearly one-fifth of this number, ie nearly 500 elephants have been in retaliation by humans in the last 5 years.

In the past, Governments have spent crores of rupees on digging up trenches and erecting fences to dissuade elephants. Also, hundreds of crores of rupees have been spent on compensation for the loss of human lives. These trenches and barbed wire fences have often caused the death of elephant calves and thus rendering these ideas largely impractical.

However, this is for the first time, KVIC has launched this project in totality. KVIC has roped in the College of Forestry under the University of Agriculture and Horticultural Sciences, Ponnampet, for impact assessment of the project.