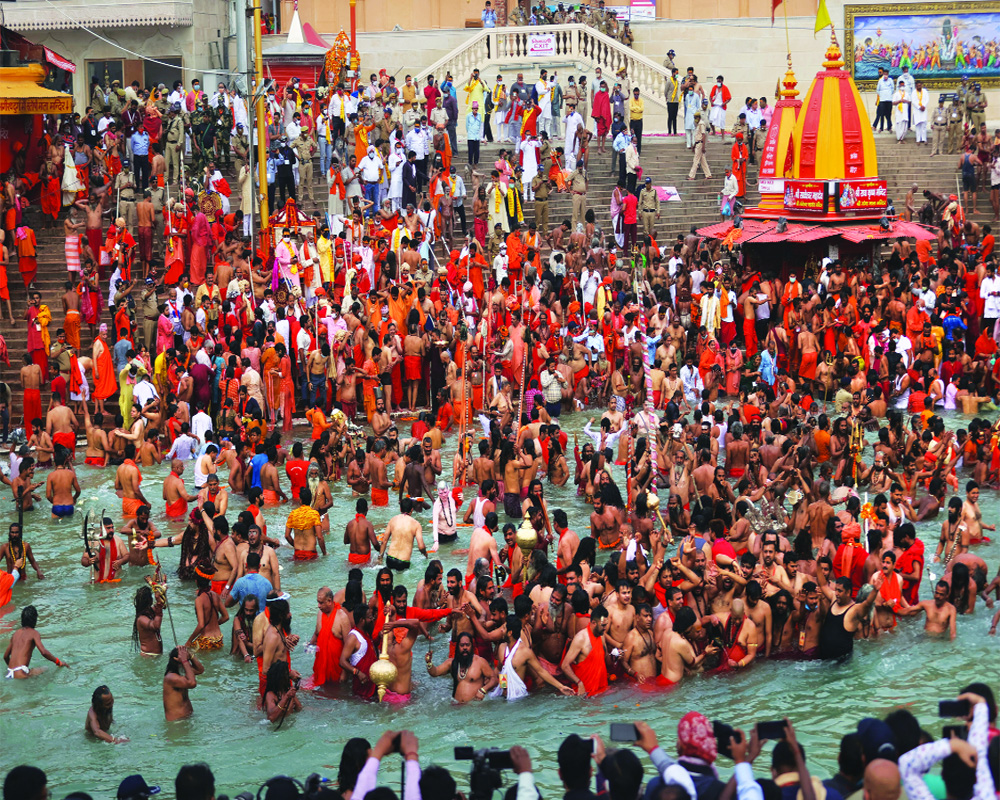 More than 31 lakh devotees from different parts of the country reached Haridwar on Monday to take a holy dip in the river Ganga at various ghats in the city on the occasion of Somvati Amavasya.

It is the second Shahi Snan of Maha Kumbh which is being organised here after 12 years.

While Har Ki Pauri, considered the holiest of the ghats, was reserved exclusively for the Akhadas from 7 am onwards, common people also took the holy dip on the other ghats of the Ganga, revered by millions as a goddess.

The seers of different Akhadas, led by their Mahamandaleshwaras, took out grand Shobha Yatras through the main thoroughfare of the pilgrimage city to gather at Brahma Kund.

As per the sequence set by the Akhil Bharatiya Akhada Parishad (ABAP), Sadhus of the Niranjani Akhada reached Har Ki Pauri first for the holy dip. They were also accompanied by members of the Anand Akhada.

The procession of the Akhadas was directed via the highway to Har Ki Pauri amidst tight security. Being Covid positive, the ABAP head Narendra Giri was unable to attend the Shahi Snan. Due to implementation of the Covid standard operating procedures (SOPs), the number of devotees was less compared to past Kumbhs where such occasions would attract around 1 crore devotees.

Marching barefoot to their destination with many of them not wearing masks or observing social distancing, the seers took a dip in the river as they were showered with flower petals from helicopters flying above on behalf of the Uttarakhand Government.

Meanwhile, the authorities had directed the vehicles to various parkings from where 262 shuttle buses were operated.

At the ghats, the police acted on the principle of ‘Teen Dubki-Ek Snan’ (three dips- one bath) in order to manage the crowds of devotees. At the same time, challans were issued to about 83 people for not following the Covid guidelines in the Mela area.

Till 3 pm the authorities had conducted 9,678 Covid tests on arriving devotees at the Haridwar border with 26 of these coming out positive. At the same time, 2,758 people and 357 vehicles were turned back in absence of Covid test reports.