Game over for Didi, says Modi

Game over for Didi, says Modi 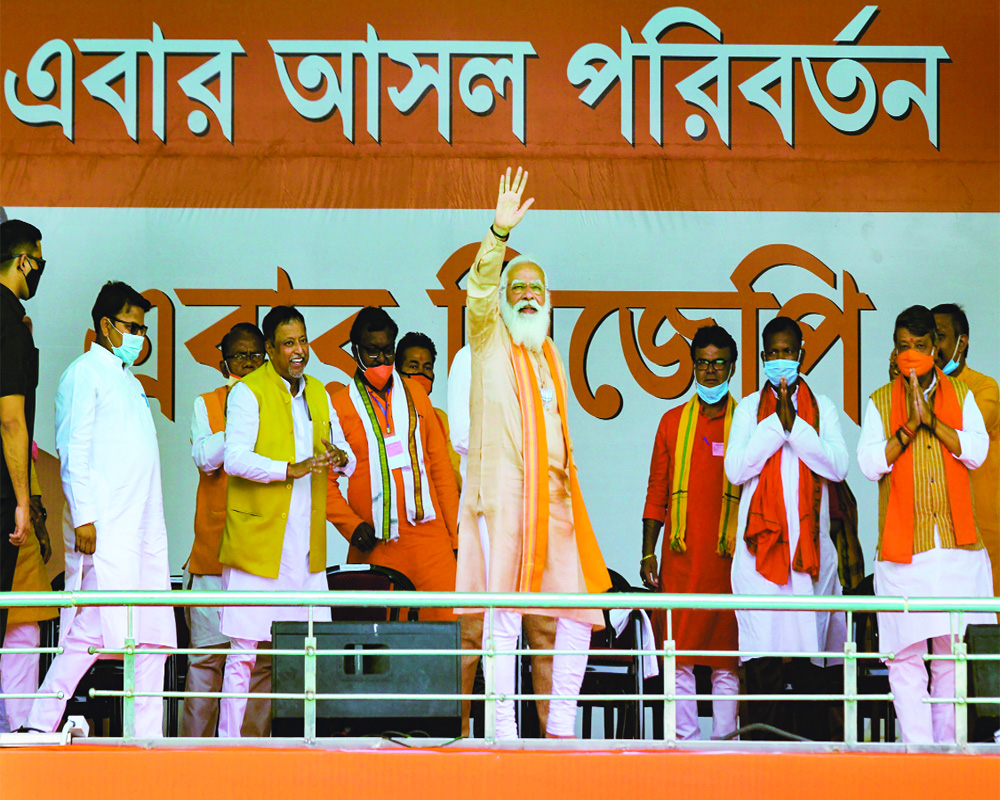 You played for 10 yrs, now development will begin: PM

Khela shesh hobe… vikas arombho hobe (game will be over and development will commence).” That is how Prime Minister Narendra Modi on Thursday countered Bengal Chief Minister Mamata Banerjee’s “khela hobey” (the game will be played) rhetoric. Modi was speaking at a huge election rally in Purulia.

Alleging that the dynamics of Mamata’s Government were appeasement, syndicate, corruption and extortion, Modi said in the name of bringing Poriborton (change) the Trinamool Congress had in the past one decade had perpetrated a goonda raj.

“Didi has made appeasement, mafia raj and corruption the corner stone of her governance where coal, cow and sand mafia rule where violence is perpetrated on the common man and where people’s money is stolen,” Modi said.

“It is because of Didi’s appeasement policy that non-stop infiltration is taking place in Bengal,” the Prime Minister said, adding the Chief Minister had “only one thing in her mind and that is vote bank politics. All that game would be over now, he said, adding “O Didi, you played for 10 years. Now the game will end and development will begin.”

“Bengal made up its mind and earlier gave a lesson to the TMC in 2019 by cutting its strength of MPs to half and now this time it would be ‘poori saaf’ (it will be completely wiped out)… As she can see what is going to come, Didi is taking out her frustration on me,” Modi said, wishing her early recovery from ankle injury sustained in Nandigram.

Saying that the people of Bengal would never forget how the Chief Minister had accused the Army of plotting a coup against her, Modi said “people still remember what you had said during the Pulwama attack and the Batla House encounter…”

Attacking the Chief Minister for her appeasement politics, Modi said, “It is in the interest of vote bank politics that even the name of Lord Ram the epitome of virtue and goodness becomes intolerable to her.

Referring to the lack of development in the region he said “this land is a witness to Lord Ram and Goddess Sita’s exile. This land has Sitakund which was created by Ram who shot his arrow in the ground to bring a water spring… and now it is the same Purulia which faces water crisis today.”

Alleging that the TMC had no interest in the development of the Dalits, backward castes and tribal people who had become the worst victims of “tolabaji” (extortion), cut money culture perpetrated by her party, the Prime Minister said that the “days of badla (revenge) are over” adding “the days of vikas” (development) will start after the BJP came to power after the elections.

Attacking the TMC for patronising the Maoists he said that though the people of Jangalmahal had overwhelmingly voted Mamata they got nothing in return. “Industrialisation and job creation was utterly neglected by the Government which was more interested in making money,” the Prime Minister said adding the full form of TMC should have been “take my commission.”