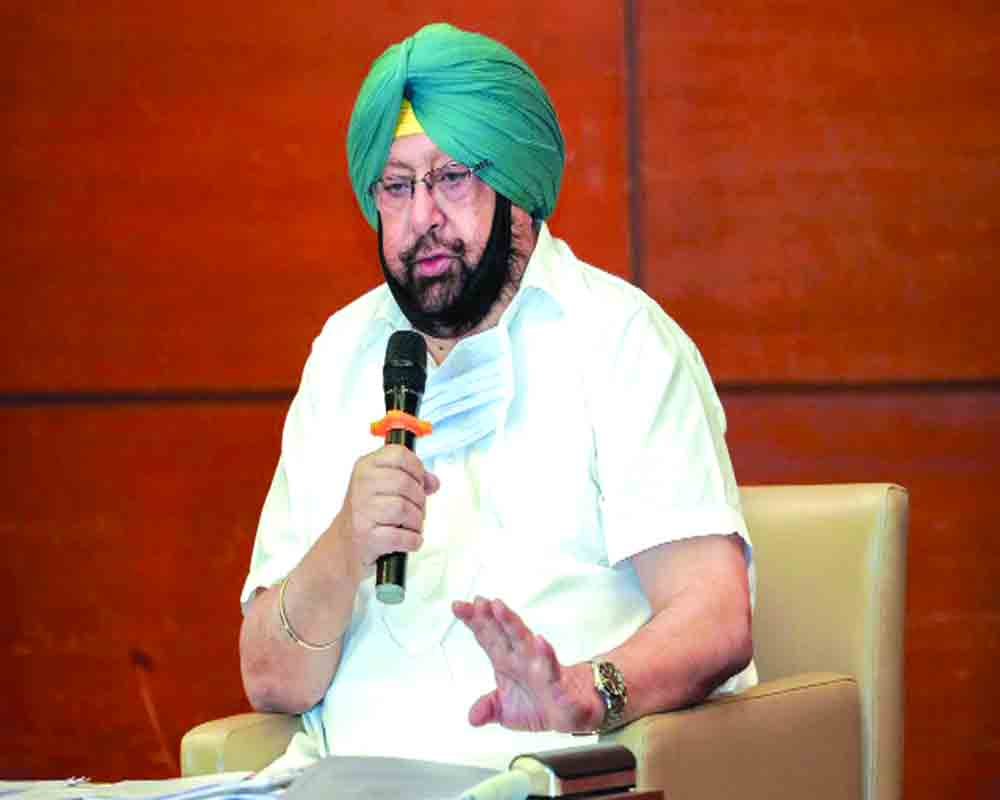 Days after Capt Amarinder Singh alleged “humiliation” at the hands of the Congress party’s central leadership leading to his unceremonious ouster from Punjab’s Chief Minister’s post, the scion of the Patiala royal family on Wednesday announced the launch of his “new party”, not disclosing the name, while claiming the “support of several Congressmen”.

Declaring that his political party was ready, Capt Amarinder maintained that the party’s name and symbol are pending approval with the Election Commission of India.

His decision, adding a new dimension to Punjab politics just about three months before the 2022 State Assembly elections, has resulted in a fresh bout of words between Capt Amarinder and his bete noire Navjot Singh Sidhu, with the former calling him “dumb”, and Punjab Congress chief describing the former Chief Minister as “loyal CM of BJP”.

Not divulging any further details about his much talked about party, Capt Amarinder said, “Yes, I am forming a party. My lawyers are working on it. But I can’t tell you the name, I will tell you when the Election Commission approves it. We have made a request for a symbol also.”

Punjab political circles were abuzz with speculations over the name and character of Capt Amarinder’s new party besides the leaders expected to join him ever since his media adviser Raveen Thukral had sent out invites for the Press conference on Tuesday. However, it failed to meet the high expectations. In fact, Capt Amarinder did not even bid a formal goodbye to the Congress party.

“I have been in the Congress for 52 years. If I stay in it for 10 more days, what will happen?” he responded to a media query regarding his resignation from the grand old party.

Capt Amarinder had, on October 19, announced that he would soon be leaving the Congress and launching his own party, while expressing hope regarding a seat sharing arrangement with the BJP provided the ongoing agitation against the Centre’s three farm laws was resolved “in farmers’ interest”.

Just at the time Capt Amarinder was addressing the Press, Sidhu attacked the two-time Chief Minister via Twitter. “We the 78 MLAs of Congress, could never imagine, what we received an arm-twisted, ED controlled BJP loyal Chief Minister of Punjab @capt_amarinderâ€¦who sold the interests of Punjab to save his skin! You were the negative force stalling Justice & development of Punjab,” Sidhu tweeted.

He further hit out at Capt Amarinder by reminding him, “Last time you formed your own party, you lost your ballot, garnering only 856 votes...People of Punjab are again waiting to punish you for compromising on the interests of Punjab.”

Responding to Sidhu, Capt Amarinder later tweeted, “You do have the knack of putting your foot in your mouth @sherryontopp! The 856 votes you are mocking came even after I withdrew my nomination from Kharar since I’d won unopposed from Samana. So what does that show? Or are you too dumb to understand.”

He added, “So why don’t you focus on your work instead of wasting your time attacking me all day long @sherryontopp? Unless you’ve made up your mind to not rest till you’ve destroyed @INCPunjab. And if that’s the case then you’re only making my task easier!”

In another tweet, Sidhu added, “Was it Pity that a 3 Member Congress Committee was formed to make you accountable (when Amarinder was CM)? Why were MLAs against you? Because everyone knows you have collided with Badals! All you want is to defeat me, have you ever wanted Punjab to win? Your 75/25 dealings with Badals and BJP are crystal clear.”

Dismissing as trash Sidhu’s tweet accusing him of being loyal to the BJP, Capt Amarinder said that the thought of seat-sharing with the BJP came to his mind only after he was forced out of office. “States have to work with the Union government to function effectively,” he pointed out.

Capt Amarinder claimed that he had not spoken of aligning with the BJP but wanted to discuss seat sharing with the party. “In military parlance, it means concentration of forces,” he said, adding that he had, however, not yet talked to the saffron party about this.

The former Chief Minister also made it clear that he had no intention of aligning with the Shiromani Akali Dal (SAD), but only with breakaway Akali groups.

Asked about the reported refusal of Rajya Sabha MP and SAD (Democratic) president Sukhdev Singh Dhindsa to tie up with him, Capt Amarinder said, “If Dhindsa wants to put up a real fight, he will have to concentrate his forces too.”

He insisted that to defeat the Congress, SAD and Aam Aadmi Party, other parties will all have to “work as a joint force.”

Also rejecting Sidhu’s claims of a majority of Congress legislators opposing his continuation in office, Capt Amarinder said: “Once they (the party leadership) had made up their mind to replace me, all these excuses were made.”

“We will fight and defeat Sidhu from wherever he contests the upcoming assembly polls,” he vowed, adding that since the former cricketer had taken over the Punjab Congress reins, there had been a 25 percent drop in the party’s popularity, as per his surveys.