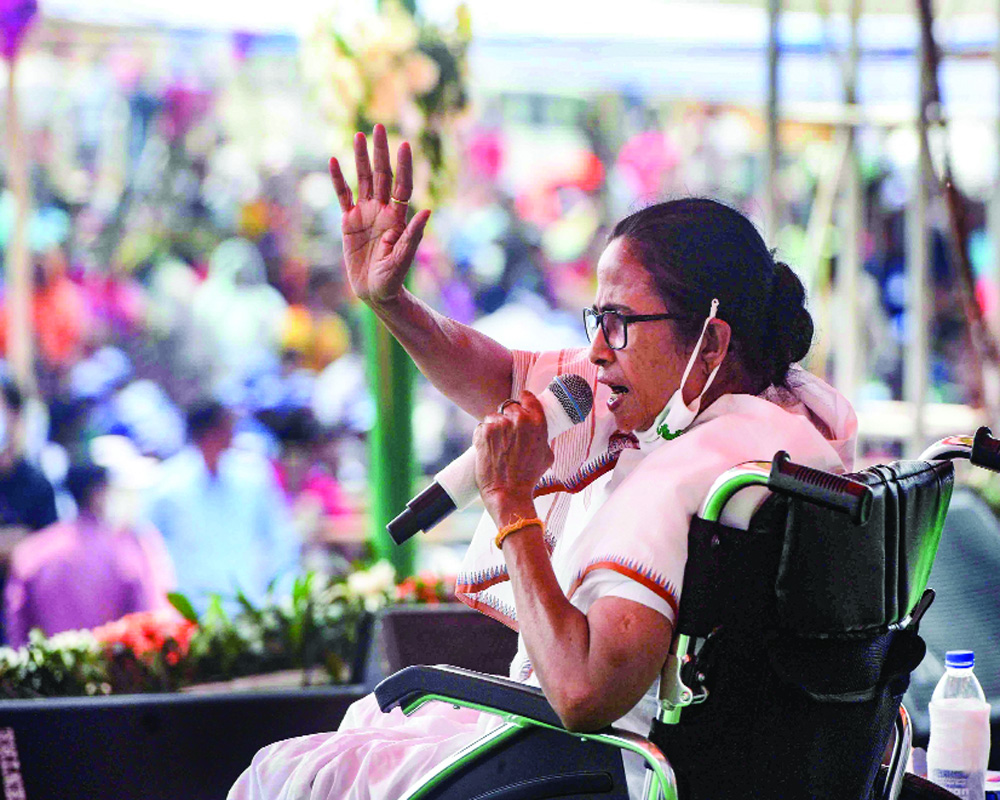 Continuing to attack the national BJP leadership and the turncoat leaders like Suvendu Adhikari, who had recently left the TMC to join the saffron outfit, Bengal Chief Minister Mamata Banerjee on Sunday said the people would never support the “gaddars and they would be thrown out of Bengal along with their masters who are goons coming from outside Bengal”.

Addressing a mammoth election rally at Contai in East Midnapore, Mamata said, “I was a donkey not have understood the real face of these gaddars (traitors) … a straightforward person that I have always been, I trusted them and allowed freedom and in return they looted the people.”

In an apparent reference to Adhikari, Mamata said, “They have misappropriated thousands of crores… I am told a scam only in the cooperative bank where they functioned as chairman amounts to `5,000 crore … and now to save these ill-gotten money they have fled to the BJP.’

Raising once again the injury she suffered during a campaign at Nandigram, Mamata said, ‘They would injure my one leg and render me immobile so that they can get advantage in the campaign but I can play even with one leg … and can hit so many goals as you will see after the elections.’

Referring to the alleged ‘tricky’ EVMs (electronic voting machines), Mamata said, ‘the EVMs should be tested 30 times before the start of the polls to ensure there is no foul play. But, If any machine develops faults, please remain calm until it is repaired.’

She said, ‘Ensure the EVMs are restarted every time and ensure that they are tested repeatedly even if that means spending of more time … otherwise you will cast your vote in the TMC and the vote will land up in BJP’s account.’

In a counterattack on the BJP leadership, particularly Prime Minister Narendra Modi for calling the TMC a party of tolabaj (extortionists), she said ‘before calling the TMC a party of tolabaj you should first reply to the people about what happened to the funds that you received in the PM Cares fund … you should reply to the people as to what happened to the BSNL, SAIL, Air India, LIC and the fate of notebandi during which you claimed that all black money will be flushed out.’

She said, ‘The BJP has already made tall promises but delivered nothing but here we have delivered through Kanyashree, Swasthya Saathi, Sabuj Saathi (free cycle), free ration etc … we promise to deliver free ration to every household after we come to power.’