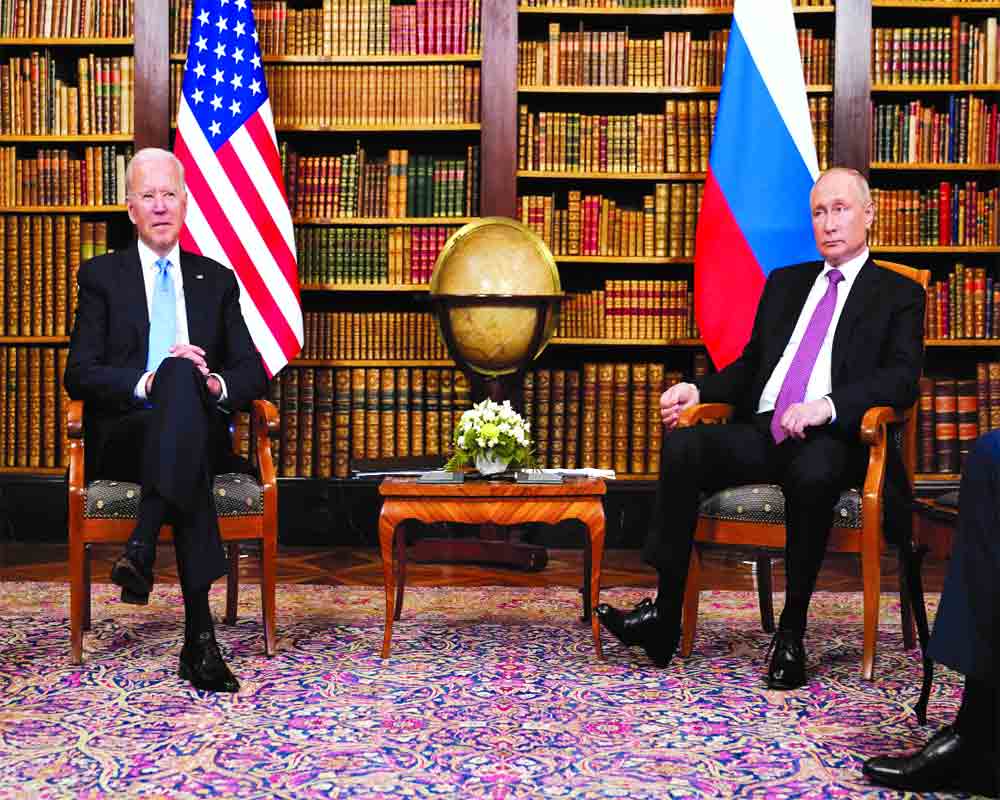 Both countries view each other as the anti-thesis of their core values. Given the differences, it is unlikely that a fundamental reset is in the offing. The change of US tone and tenor in Geneva, therefore, appears more tactical than strategic in nature

The recent US-Russia summit held in Geneva between Presidents Joe Biden and Vladimir Putin lived up to its billing of one of the most anticipated events of the year. The outcome of the event far exceeded the lower-than-usual expectations of a US-Russia summit amid the deterioration of their ties to a historic post-Cold War low. The envisioned Strategic Stability Dialogue anchored in arms control and risk reduction initiatives has the potential to de-escalate their ongoing confrontation.

Crucially, the summit stood out for its positive tone and tenor. Frequent emphasis by both sides on strategic stability, predictability, mutual respect and mutual interest reflect a détente hitherto unseen in US-Russia relations in the past decade. President Biden’s statement of avoiding a Cold War 2.0 echoes this sentiment. Taking this cue, the usually belligerent court of American public opinion appeared muted. Perhaps, this stems from President Biden not carrying his predecessor’s baggage of allegedly batting for Moscow. The fact that this summit took place early on in the Biden Presidency indicates a new approach to bilateral ties. Pertinent questions that arise are — Is this a reset of US-Russia ties? And how does this détente affect India?

Today, there are multiple areas where Russia-US interests overlap. These include tackling climate change, terrorism, Covid-19 pandemic and proliferation of weapons of mass destruction, apart from avoiding an inadvertent military collision. By identifying their red lines, it is likely that both sides are seeking to chart new terms of engagement. While for the US, non-negotiables would include perceived Russian interference in American elections, cyber-attacks and if Russian Opposition leader Alexei Navalny dies an unnatural death, Russia would draw the line at Ukraine’s membership of North Atlantic Treaty Organisation (NATO).

However, in the past, their convergences have not prevented their relationship from turning adversarial. In fact, a deep dive reveals their differences far outweighing their shared interests.

At the core of this dissonance is their divergent global outlook. Russia has sought an equal status with the US on the world stage. It has also refused to acknowledge American hegemony and been a vocal critique of US interference in internal affairs of sovereign states. Meanwhile, the United States does not view Russia as an equal power with the country perceived to be in decline. It has sought to isolate the Kremlin with a view to stymie its aspiration of becoming a global pole. NATO’s eastward expansion, installation of Western missile defences in Russia’s periphery, support of colour revolutions in the post-Soviet space and sanctions targeting Russian economy have been part of the US toolkit of Russia’s containment.

In fact, both countries view each other as the anti-thesis of their core values. The US often sees Russia through the prism of a rogue and revisionist actor. Meanwhile, Russian politicians have long accused the US of double standards, given the latter’s playbook of selective unilateralism and aggression. Crucially, Russia has deployed anti-Americanism to drum up domestic political support, shaping the narrative of the US seeking to undermine Russia’s great power status.

Given these differences, it is unlikely that a fundamental reset is in the offing. The change of US tone and tenor in Geneva, therefore, appears more tactical than strategic in nature.

It appears that the US has hyphenated the geo-strategic challenge emanating from Russia and China. Today, American outreach to Russia is likely driven by its calculation of tackling China head-on which Secretary of State Blinken has referred to as the United States’ “greatest geo-political test”. With Russia perceived to be in decline and, therefore, more manageable, a US-initiated détente likely seeks to leverage Russia’s historical affinity of being a part of the West to better manage one part of its dual confrontation. In effect, the US could be reverting to its Cold War playbook of weakening the Russia-China entente that is directed against United States. In the past, both Russia and China, notwithstanding their rapprochement, have parallely sought a modus vivendi with Washington. The sharp contrast between the positive business-like atmosphere of Biden-Putin talks and the acrimonious US-China exchanges in Alaska in March 2021 gives credence to the US tapping into this inherent Russian calculus. However, a fundamental US-Russia grand bargain on China appears unlikely given the robust improvement in Moscow-Beijing ties.

Optically, President Biden’s Geneva outreach ticked a number of Kremlin’s key geo-strategic boxes. These involved recognition of Russia as a great power and an indispensable stakeholder in managing global security. An increasingly bipolar US-China global narrative carries the risk of leaving Russia in its trail, hinted at in President Biden’s statement of Russia being in a “very, very difficult spot”, being “squeezed by China” and wanting to “remain a major power”. Biden’s reference to the Minsk accords, where the dice is loaded in favour of Russia, for resolving the Ukrainian impasse would not have been lost on Moscow either. Meanwhile, Biden’s acknowledgement of Russia’s great power status would invariably boost Putin’s popularity ratings, as restoring Russia’s great power status has been the core of Russia’s domestic discourse. Similarly, the proposed Russia-US arms control negotiations appear timely for Moscow amid its ongoing economic slowdown.

Nevertheless, the jury is still out on a US-Russia thaw. It is unlikely that American sanctions will be lifted in the future. Now with red lines clearly enunciated, any breach would inevitably warrant retaliation, derailing détente. NATO’s eastern European members, who view Russia as a perennial threat, too could queer the pitch.

There is no gainsaying that India’s ties with Moscow and Washington remain mutually beneficial and bolster India’s strategic autonomy. A Russia-US thaw will increase India’s scope for manoeuvre in navigating ties with its two strategic partners. This is particularly relevant, given that in the past India has been confronted with the complexity of a Russia-US conflict spilling over, with New Delhi expected to choose sides. The looming spectre of Countering America’s Adversaries Through Sanctions Act (CAATSA), aimed at diluting Russian military footprint in India, has hung like the proverbial sword of Damocles over India.

Crucially, for India, a US-Russia thaw may give Moscow some breathing space in its growing strategic dependence on China, which has compelled Russia to increasingly bat for China’s interests. This Russia-China tandem has ended up muddying India’s geo-strategic environment. The Russia-US thaw could provide an opportunity to add more pillars to the Indo-Russian strategic partnership with ramifications stretching beyond their bilateral realm.