A thriller that rewrites history

A thriller that rewrites history 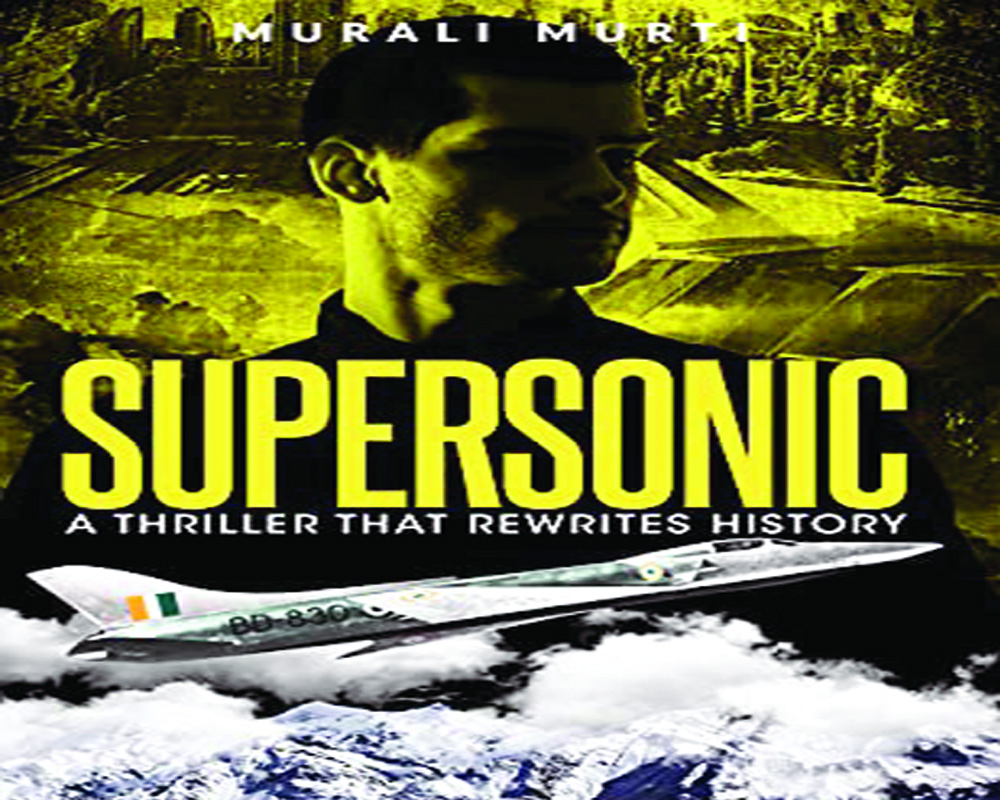 Based on events which are easily recognisable, Murali Murti’s Supersonic is a fast-paced, racy political thriller which unfolds in the shadows of the corridors of political power, writes Narayani Basu

Supersonic is the story of India’s first fighter jet: the HF-24 Marut. Told by Murali Murti, an academic when he is not an author, this is a fast-paced, racy tale which unfolds in the shadows of the corridors of political power. The inspiration for Supersonic lies in the greats of the genre that is the political thriller: Frederick Forsyth, Michael Crichton and George McDonald Fraser. Murti brings the same style, scope and scale that these stalwarts are renowned for to Supersonic, which opens at the height of the Second World War. It begins as all good stories do: with a murder and an undelivered letter which, had it reached its destination, would presumably have altered the course of history.

For a change, this is no exaggeration. Murti’s story contains no fictional protagonists, basing itself instead on events which are easily recognisable. The narrative begins in 1955, when Indian Prime Minister Jawaharlal Nehru’s sole focus was to not only build a vibrant democracy but to also try to position India as a global leader of a “third bloc” of nations that would stay neutral during the ongoing Cold War. In order to posit itself as strategically capable, India would need not only a domestic arms industry, but an indigenous fighter jet. Supersonic takes the reader — at an almost bruising pace — Delhi to cocktail clubs in Madrid, to private meetings in the Pentagon and faceless, nameless Soviet agents. Elaborately described espionage and secret political power-plays make up the fabric of this plot, but truth is another skein that runs through the narrative.

Since India’s independence, Jawaharlal Nehru and his Defence Minister, V.K. Krishna Menon were united in their decision that India’s power should be showcased in its own domestic programme: an indigenous multi-role fighter jet, capable of high altitude interceptions and strike missions. Enter Kurt Tank, the brilliant German aviation expert who had designed the Luftwaffe’s prize FW-190 fighter during the Second World War. With Tank at the helm of affairs, India began its journey to develop what it would need to face a modern, post-war world: a supersonic fighter jet, a missile programme and a nuclear weapons programme. Murti uses these events — replete with photographs, mock-ups and footnotes — to tell a fictional story of corporate and political espionage and a race against time. The characters in Supersonic are rich and colourful — ranging from newly dethroned Indian royals finding new ways to pay for their princely lifestyles to anonymous bureaucrats, and a shadowy German consortium that insisted on being a global puppet-master. Murti writes with a flair for the backdrop against which he sets his story — moving from the Marbella in Madrid to the Pentagon in the United States with ease.

Work on the Marut began in June 1957. Cleverly mixing fiction with facts, Murti describes not only the machinations that took place behind the scenes of its evolution, but also the finished product. The HF-24 Marut would never be the prodigy it promised to be. It was always under-powered, and only limited to light ground attack duties. With its continuing limitations and the non-availability of a proper engine, the IAF was never fully committed to continuing with the Marut. The game changed again in the 1960s, with India’s disastrous loss to China in 1962 and Beijing’s testing of its first nuclear bomb in 1964. Using declassified CIA and KGB files along with minutes of meetings between Lyndon Johnson and key advisors to establish the new direction of the novel, Murti takes the reader on a brisk trip to Tashkent and the mysterious death of Prime Minister Lal Bahadur Shastri in 1965. Of the many events that Murti outlines in Supersonic, one has heard only persistent rumours, from Homi Bhabha’s death in a plane crash over the Swiss Alps, to Shastri’s ostensible demise of a heart attack and Vikram Sarabhai’s mysterious end in a hotel room in Kerala. Given the mystery that shrouds these events, it is a clever trick to base fiction on fact as it opens up a subject to new debate and questions, especially when it is based on empirical evidence.

Yet despite these setbacks, India’s search for a capable indigenous fighter jet never stopped. Murti takes the reader over the 1970s, right through till the 1990s. The stage changes with fluid ease, introducing new players — Adnan Kashoggi and A.Q. Khan — against the backdrop of a changing world order: NATO, Britain, France, Israel and Sweden. Murti’s understanding of the shifts in technology and geopolitics is excellent, and it lends itself well to this fast-paced narrative of prowess and espionage.

Supersonic closes four decades after independence, with the arrival of HAL’s multi-role supersonic Tejas fighter on the scene. With it, India joined an elite group of countries that demonstrated the capacity to develop and manufacture so-called fourth generation fighters. There have been questions — there always will be, as Supersonic will tell you — on the procurement of international parts for what is called an indigenous fighter jet. But it is a huge step forward for India’s military and strategic prowess.

Both Jawaharlal Nehru and Kurt Tank would have been proud.

The reviewer is a historian and an author