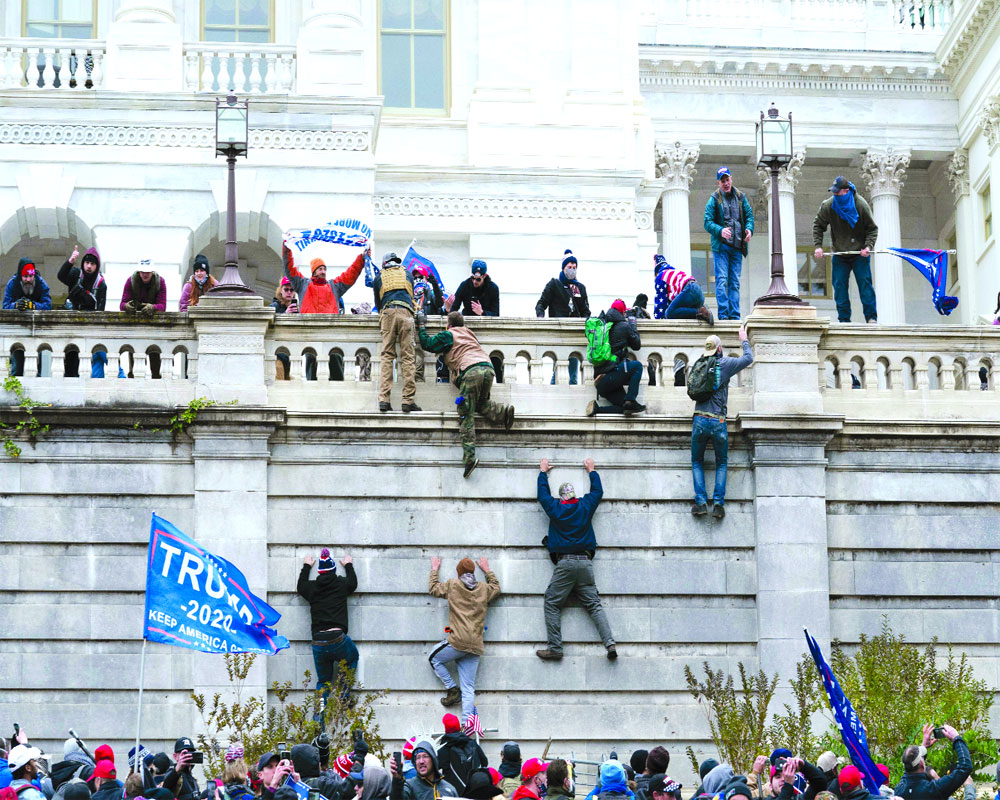 The menace of the “Radical Democrats!” That’s what US President Donald Trump contended in a rally a few days back in order to spark a storm of protest by GOP supporters and voters in order to substantiate his claim over the notion of fake voters. Trump has been insisting on the voter fraud in his umpteen narratives in the aftermath of around one-fifty lawsuits being rendered useless and termed fiction-infested by the lower courts and twice through the seminal decisions of the US Supreme Court, surprisingly by the judges appointed by President Trump himself. Thus, the way the US Capitol Hill was attacked and violated on January 6, it comes as no surprise that the finger is being pointed at the intent and stature of President Trump. The elections in the state of Georgia to decide about the senators from the state will have a long-winding impact on the manner in which the Joe Biden team performs and scuttles the diatribe of the GOP in the days to come.

The vitiation of the grandiose Capitol Hill, a symbol of American power, pelf and larger hyper puissance, sheds meaningful light on what the American cornucopia is going through in the contemporary context in these vitriolic times. There was a kind of electoral siege which was imposed on the Congressmen and women who were besieged in the heady portals of the Capitol Hill. An extraordinary emergency call has emanated from the Pentagon officials to President Trump to desist from involving military in the elections in the homeland, a first in the entire electoral history of the United States of America.

The extraordinary scene unfolded as police personnel were outnumbered by the maskless protesters who breached security and entered the Capitol building, where members of the Congress were going through the process of counting and certifying the Electoral College votes.

“It was one of many shocking moments that played out on television screens across the world as the seat of the world’s greatest democracy came under assault from hundreds of protesters angered by Trump’s loss to his Democratic opponent Joe Biden in the November presidential election,” it was reported.

Capitol is the symbol of American democracy in whose context a French political scientist has gone on to contend famously that bipartisanship ought to be the order of the day in the body politic of US democracy. He stated that the contours and the ideal functioning of the grid of American democracy is such that the mortar and the liquid concrete in a building construction are enmeshed together and grounded in order to prepare a workable and smoothened out paste of creation and establishment in the quintessential American tradition of democracy, constitution, rule of law and unanarchic order of the day.

Still, one can gauge the nature of the dystopian pandemonium, going by the pictures as they beamed to the global audience as pro-Trump protesters stormed the Capitol building, Mt Sinai and the citadel on the high ground. It, at the onset, appears as another cantankerous catastrophe and political mess on the lines of September 11 attacks. It is a bad omen. The Capitol Hill is akin to the Statue of Liberty and the White House and all these historically proud and imposing landmarks along with the star-studded walkways in LA have always been associated with the awe and respect of the hoi polloi all across the panoply of nations and the larger international system. The siege is a fervent reminder of the nature of crass political debate which the nations have sunk into but on the flip side of it, there’s nothing wrong with the nationalistic and patriotic fervour of the American denizens and not much ought to be read out of it in connection to the much tomm-tommed “American Decline”. Still, the raucous rabidity of the political discourse and now the unfolding protests and the attendant siege pinpoint towards an unstable and shaky future for the American politics.

An Indian national daily reported that, “The trigger for these protest was a speech given by Trump, who asked his supporters to ‘fight’ to stop the ‘steal’ of the election and march on the Capitol where a ceremony is being held to certify the Electoral College votes that will formalise President-elect Joe Biden’s victory. The scenes that Americans are accustomed to watching in distant lands, played out in their own backyard as the protesters pushed through police barricades and broke windows. The violence also included gunshots fired in the Capitol, which led to the death of a woman.”

Thus the American democratic tradition has taken a severe beating with the onslaught on the Capitol Hill which is associated with the glib debates, intense rigmarole of lobbying and the green lighted lamps in the chambers of the US Congress. Do we need to complacently reconcile with the dictum that, “Violence is as American as a cherry pie”. Such a sloganeering and maxims might be more attuned to and at home with the Black Rights movement but not with the stellar and unbesmirched role model of American electoral and political culture.

Still, it might be a futile exercise to ascribe and juxtapose the Capitol Hill with the anti-slavery movement and the racist violence and the Black Rights movement of the red summer of 1919 immediately in the aftermath of World War I. The violence on the American street and largely reflected in the American Classic, “Ragtime,” does shed light on the theme of American protest movements but the rage encountered in the seat of the larger than life American seat of power and posterity is unparalleled in the narrative of the American history. Black Rights movements had a palpable justifiability and a staple raison d’être associated with them which these raucous crowds do not espouse. The violence and negative political rhetoric associated with MAGA (Make America Great Again) needs to be corrected if the American zeitgeist is not to lose its “currency and sheen” in the larger global firmament. Places such as Tulsa, Oklahoma and Mississippi need not be relegated to the backburner as being associated with turmoil and vicious political vacillation but incidents which honed America into becoming what bit has turned out to be. Incidents such as those at Capitol Hill might be read as reflecting the larger decay but lest it not to be forgotten that there are seismic Sudans, horrific Haities and astute Azerbaijan’s struggling for their sanity in the nether regions of the larger international system. American democracy is not a tinder box that can be destroyed by a single violent incident, but it definitely renders a blow to the ideal of American liberty and freedom fief which is something the proud American nation has always stood for.