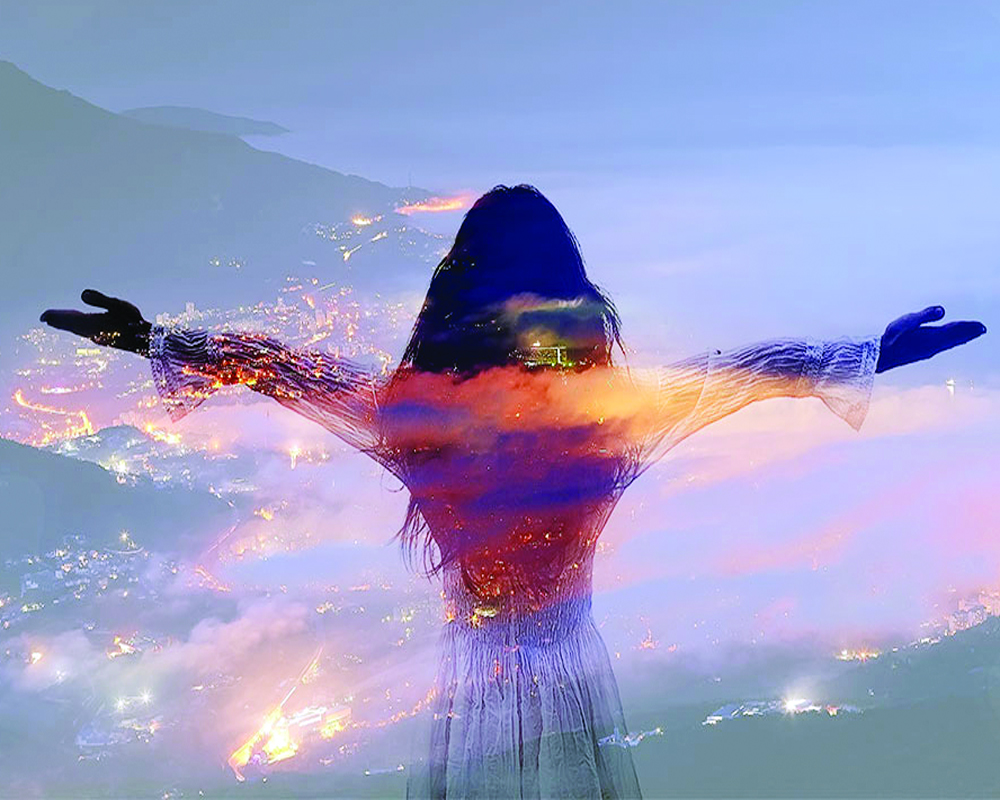 The legend pertaining to the making of the Mother does also hint on evolution and devolution of nature driven energies — from a singularity into multiple chains, and then back to the primal-source. It implies that Mother contains in Her, the essence of all forces in operation in the universe. That is how, when forces extended by different Gods joined hands, the Mother made her appearance. She, thus, symbolises convergence of all nature driven energies, vital to our existence. Hence, the name “Durga”, which in linguistic terms means something unassailable. Out of the primal source has evolved a complex chain of forces, each personified as a Devata specific, which following a self-evolved intelligent design, creates, sustains, and recycles the life cycle. After having exhausted their sustainable limit over a period of time, these forces, and thereby the world, may revert back to the primal source. Out of the seeds of life that these forces carry back, a fresh creation chain may get excited. Thus, goes on a continued chain of evolution and devolution with no beginning or end in final sense.

Now, why the form of a Mother, and not a male or just a feminine presence? Our masters had very well understood double propensity inherent in all empowerment tools — physical, material, or intellectual. Accordingly, they felt the need to educate all and sundry on how to judiciously use Sakti, for smooth run of the worldly order. As we are aware, a mother uses all resources available, to bear, produce, and nurse her child, till they qualify to manage on their own. She bears with all the pains in the process, yet she rejoices for what she has brought up. In her true motherly spirit, it remains a selfless exercise, as she does not expect anything in return, at least in immediate terms. A mother, thus symbolises judicious and selfless application of Sakti.

Let us now see, what the form in which the Mother is popularly visualised, implies. Mounted on a Lion, She is shown with 10 hands. In eight hands, She is shown holding different weapons, each offered by one or the other Devata. In remaining two, She is shown with a conch shell in one and Lotus flower in the other.

Now, what does different accessories in her hands imply? Mind it: there are ten directions — North, East, South, West, the four corners, one above and another below. It implies 10 dimensions of energy flow in nature. She attends to the energies flowing through eight different directions with the armouries she carries. With the other two hands, she accesses positive forces. It will naturally be desirable to access and make the most out of creative energies and simultaneously checkmate the implications of negative forces.

The conch-shell when blown, excites a sound note comparable to “Om” — the primal-sound, which excited the creation chain. The mother, thus, personifies the source energy up above in the infinite domain. The majestic Lotus flower in all colours made of numerous petals signifies enormity and diversity of creation, which is symptomatic of her noble creative intent. Such an enticing Lotus flower grows in mud underneath water body. Yet its beauty and lustre remains unspoilt, regaling everybody. Not even a trace of mud or water droplet can stay on flower leaves. She, thus, remains detached from the earth-matter making it.

The lotus flower does also point that though being all powerful, yet, Mother does not carry any sense of ego. In fact, despite all oddities and hazards coming Her way, She continues to exhibit tenderness, sense of love, generosity and doting nature, as reflected by the majestic flower. Even the killing of the demons is not done out of any sense of revenge or prejudice. Her intent is just to ensure the survival, welfare and orderly existence of the world. Evidently, lotus flower corresponds to productive face of the source energy, which, following a course of progressive evolution, manifested into the world of beings.

Different weapons in Mother’s remaining eight arms are evidently aimed at combating the onslaught of demonic forces. But, why armouries in eight hands and productive accessories in the remaining two? It simply suggests that that forces, contrary to our productive aspirations are far more active and no less potent than our creative initiatives. The evil forces are in evidence all across, making us vulnerable to their onslaught from all possible directions. And, their killing potential would be felt much faster and relatively cover a fairly wider range than our productive initiatives.