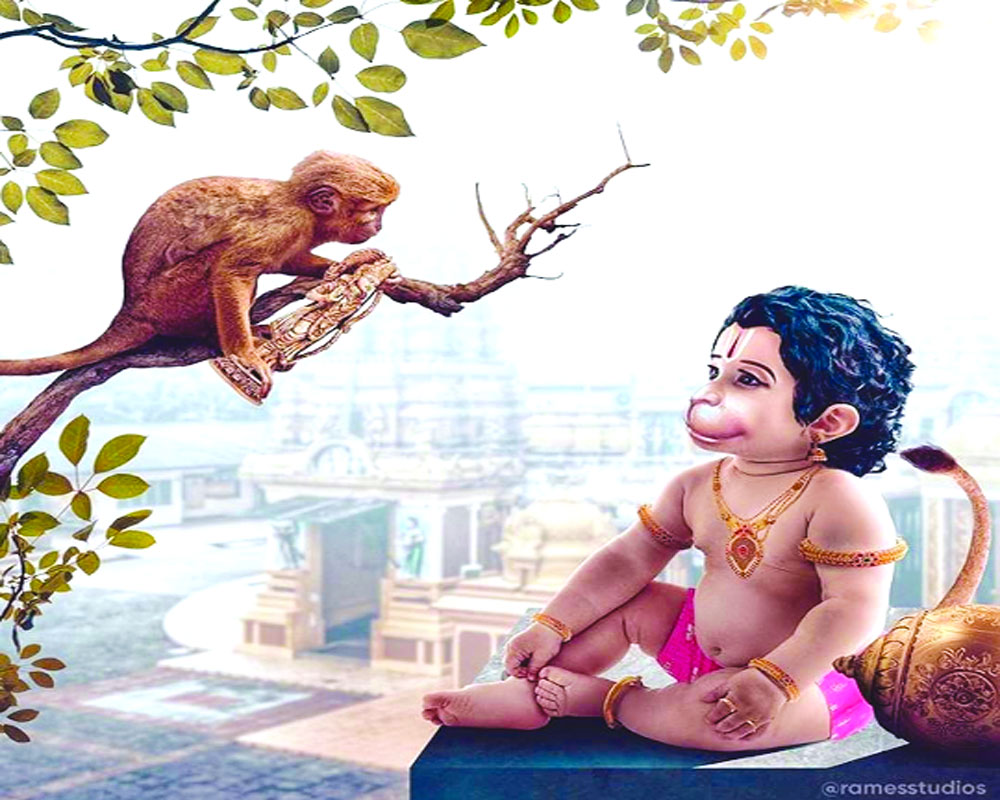 Lord Hanuman is believed to have surrendered himself in service of his ideal, Lord Rama. Driven by his intense sense of love, he put in his heart and literally merged his identity with his ideal’s consciousness. Having thus, being fully in tune with his ideal, he could avail of the wholesome powers intrinsic to the consciousness element. No wonder he could perform such extraordinary feats as would find no parallel.

In prayer mode, when you put in your whole, you acquire the virtues of what you remain focused to. So says The Bible: “Seek ye first the kingdom of God, and all his goodness, and all that get added on to you.”

The paradox, however, is that Lord Hanuman ordinarily remained ignorant about immense power, he was endowed with. Evidently, under usual circumstances, he would be driven by his animalistic instincts. But when reminded, Lord Hanuman could invoke his indwelling powers if ever needed.

As the Ramayana story line runs, Lord Hanuman was entrusted with the task to locate Sita, who had been kidnapped and was in Ravana’s captivity. As per available indications Sita was somewhere in Sri Lanka. To make it to his desired destination, Hanuman had to cross over the ocean, which appeared impossible. But when reminded by Jamvant, the boar chieftain, about the powers latent in him, he realised that he could fly across ocean. So, he invoked his untapped power base and then made it to Sri Lanka.

More than that is subject to our conscious efforts. If, however, even if they are able to make optimum use of whatever they have in hand, they could successfully negotiate the usual callings of life with ease and comfort.

The irony, however, is that an ordinary mortal, caught up in the thought web of their own making, dissipate a considerable sum of their mind power over inconsequential acts — dealing with carryover effect of negative imprints picked up in the past, which in turn induces a sense of insecurity over assumed thoughts and thereby stress; over assumed dream perceptions. Consequently, they are hardly left with enough to do justice to their priority preferences, and with obvious consequences.

Human beings too carry both animalistic instincts as well as humanistic virtues. Which of the two drives a being would depend on how one’s mind is oriented. The irony of the whole situation is that one’s animalistic instincts keep playing their part involuntarily from the front. But one’s virtues need to be identified, acknowledged, honed, and then consciously invoked to be put to use.

What stands in the way is the fact that human mind is fragile. It keeps randomly flirting around with varied thoughts, something like a monkey randomly and unmindfully jumping from one branch of a tree to the other. It, thus, becomes incumbent upon a being to first control one’s monkey-mind, for the indwelling virtues to play out unhindered. And that can be achieved following the two-stage meditation process as discussed in the previous chapter.

Pursuing Dhyana, with focus on Lord Hanuman, would inspire the seeker to imbibe his spirit. Accordingly, one would be tempted to explore, identify, and acknowledge, inlaid virtues, and then hone them, so that they become worth use in contemporary terms.

And because Lord Hanuman is identified with valour, reflecting on His imagery may also help get over the sense of fear and insecurity if any. Also, it may grant the will and resolve needed to take on the challenges ahead in life in all strength.