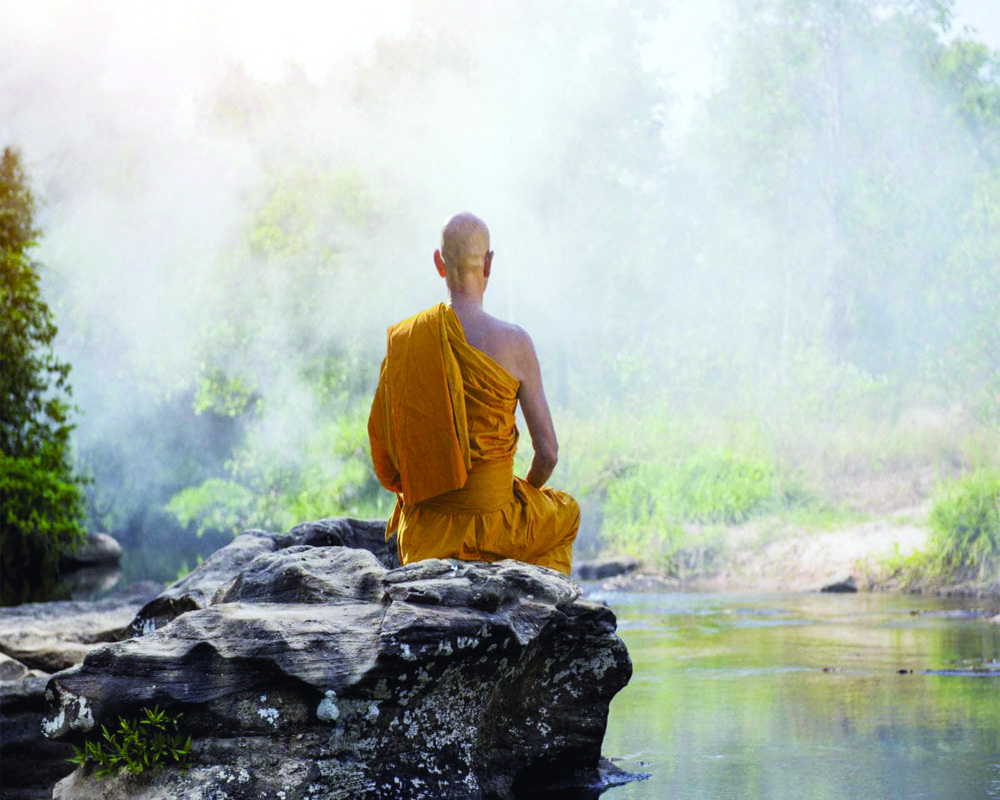 We have so far had insight into the first four steps of eightfold path suggested by sage Patanjali. That prepares the ground to begin the Dhyana process. The steps to follow need to be seen in a running sequence, as progressively succeeding stages of a singular process. For, the first step Pratyahara, which implies interiorising the mind, is the mode in which the whole dhyana process is carried on. Dharana, dhyana, and samadhi are progressively growing three successive stages of dhyana. There is no exclusive process dedicated to either of them. One keeps graduating from one stage to the other. There is a very thin line distinguishing one from the other.

Pratyahara: Pratyahara, in practical terms means withdrawal of senses away from the external objects, into the interior of mind. Our attention is thus turned inwards. Purposely so, because the final destination is to strike upon and tune up with the element of consciousness, the core of a being lying within all of us. Following which, wholesome powers of mind become available.

It is pertinent to note that all happenings originate in the inner realms of mind. You first visualise, ideate, discriminate, articulate, and then put them into action. And the nature of any action, be it a fresh initiative taken, or in response to external stimuli, is influenced by how each mind is inherently framed. That makes it incumbent upon us to explore what lies in store of the inner realms of the mind. So is the need to turn our attention inwards. But before the final destination is struck upon, one has to pass through various layers of mind. They have in store, impressions of varied memories picked up in the immediate and distant past.

As attention turns inward, first comes to sight thought crowd gathered up in the immediate past. These impressions, although relating to past, keep repeatedly chasing us from within, engaging our attention in immediate terms. The impressions that affect us the most are persistent desires and those having negative orientation. They keep alive in mind our sense of want, hurt feelings and emotions, as well as indwelling sense of fear and insecurity if any. They keep unnerving us. But then, without becoming aware of them, it would not be possible to resolve and get disengaged from them either. Denial does not help. Having thus disengaged oneself from the indwelling thought crowd, which otherwise keep hounding us from within, one feels unburdened and relaxed. Following which, doors open to strike even still deeper layers of mind.

Further down the line, one’s true nature gets revealed — inherent vulnerabilities and workable part of one’s indwelling potential, coming as they may as reflection of the Karmic imprints carried over from the past. We, thus, become aware of our inherent tendencies — desire trends, habits and attitudes, likes and dislikes, prejudices and obsessions, virtues and attributes, as well as indwelling potential. Accordingly, one could take necessary corrective initiatives to get over one’s limitations of mind through fresh educative inputs. Also, acknowledge the workable part of one’s indwelling potential, hone them further, and make them worthy of being applied in contemporary terms. One could even expand one’s potential self through conscious efforts and amplify one’s creative abilities.

As one gets established in the process, step-by-step one could go deeper and deeper, and unravel memory impressions laid down even at unconscious level. Eventually, one may strike at the core of one’s existence. One’s true self then gets revealed, where after one realises the unity underlying all diverse existences. That makes one rise above the sense of duality and thereby relative perception. One’s full potential of mind thus gets unfolded.

Dharana/Dhyana: The dhyana process proper begins with dharana. The calling of this process is to train one’s mind in a way that it remains focused to wherever attention is paid. The process suggested is to focus attention on some iconic figure or concept for a continued stretch of time and remain steadfast to it. The icon has to be opted preferably as suggested by the Guru. It could be some known symbol, concept, or some abstract figure such as a dot. In the Indian tradition, invariably symbolism, intuitively perceived by ancient India’s seers, each reflecting valuable educative import, are preferred. Reflecting on them helps add quality and value to one’s thought process. The process involves simultaneously chanting a mantra dedicated to the imagery in focus.