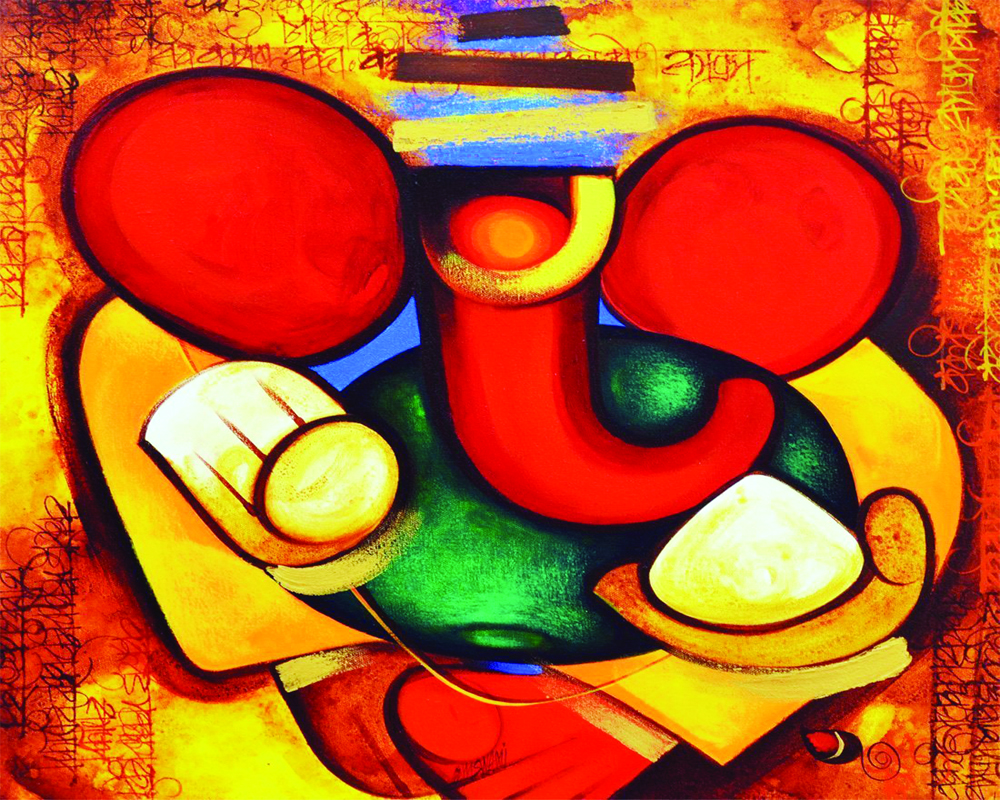 The Ganapati imagery and the story line running around makes out an interesting reading. He is perceived as having the head of an elephant with a single tusk. He has a small mouse as his mount. Animal forms have been extensively used in Indian tradition to enlighten us on one or the other virtue, vital to qualitative existence, evident in the particular animal’s behavioural pattern. The fact that animal behaviour is in public knowledge, it provides easy ground to make an analogy.

Let us first have a brief run into the legend pertaining to his origin. It is believed that Goddess Parvati, Lord Shiva’s consort, made a beautiful clay idol in human form. She then infused life into it. He was named Ganesa.

The story suggests that our gross bodies are made of earthly matters. When the fundamental element of consciousness becomes available to the form-body, it becomes alive. It implies that left to itself, the gross body made of earthly matter would remain a dead matter. The paradox, however, is that most of us just identify oneself with the gross body, seldom realising that our dynamism is actually rooted to the consciousness element. This eternal truth needs to be understood and acknowledged, is what comes out of this story.

In the above context, it is worth mentioning here once again that as per ancient India’s perception, Lord Shiva symbolises the transcendent consciousness — the seed-potential to create life. His consort Parvati, by Herself no different from Lord Shiva, serves as His kinetic side, the immanent consciousness, the power by which She makes life flow. The above legend needs to be understood in this background.

The legend further states that once Ganesa stood guard with the instruction that he should ensure that no body disturbs Parvati while bathing in her private chamber. Meanwhile, Lord Shiva comes to join His consort. Ignorant of the fact that Lord Shiva is his mother’s spouse, Ganesa did not allow Him access and rather stood firm in His path. When all persuasions failed, a battle followed in which, enraged Lord Shiva chopped off Ganesa’s head. When Parvati learnt of Ganesa’s death, her ire got aroused. In a fit of anger, having lost her sensibility, She could have destroyed the whole Universe. Everybody got alarmed.

To pacify Parvati, Narada was sent to her as a messenger. Parvati agreed to relent on two conditions: (a) that Ganesa had to be brought back to life and (b) he should be granted Godly status with all divine rights. In deference to Her wishes, first Ganesa’s headless body was bathed and cleaned. Meanwhile, the head was lost in the din of battle. Shiva then sent out his companions with the instruction to kill and bring the head of the first living being in sight. That happened to be an elephant with one tusk. The elephant’s head was transplanted on Ganesa’s body. Brahma, Vishnu and Shiva, the God trinity personified, respectively assigned with the functions of creation, sustenance and recycling life, joined hands and brought back the dead Ganesa to life. Shiva accepted Ganesa as His son. He also made Him the lord of His companions (the ganas), and so is also called Ganapati (the lord of gana-s).

Let us now look at the educative import inlaid with this particular symbolism. Elephant is one animal which has sensibilities and emotions akin to a human being. It lives in herd where the order of their leader is strictly obeyed. They remain as possessive of their mates as human beings. They can be seen weeping following death of their fellow being. They are even believed to dig ground and bury their dead. They get enraged if ever their privacy is ever encroached upon. And since they have longest memory, the elephant hits upon the person who encroached his privacy, if ever noticed much later. The elephant exactly remembers the track it followed in the past in search of food or water and will try that option when faced with scarcity. Thus, goes the proverb: “elephantine memory” to mean infallible memory.