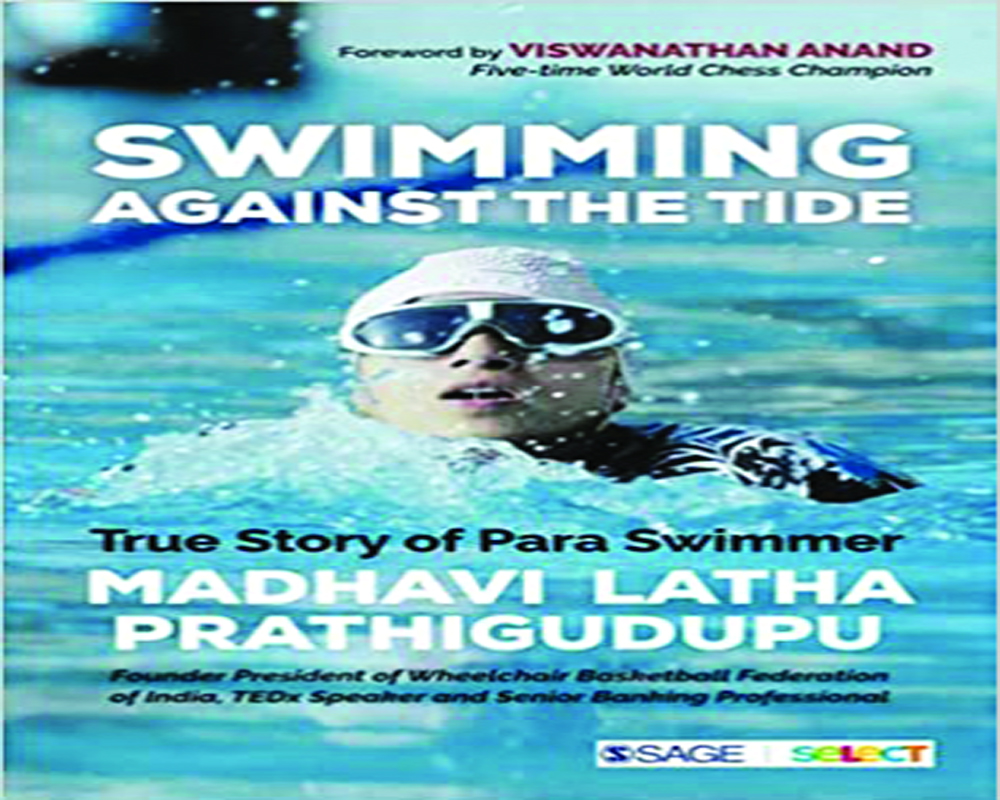 Swimming Against the Tide: True Story of Para Swimmer

Swimming Against the Tide: True Story of Para Swimmer by Madhavi Latha Prathigudupu is a true story of an extraordinary sportsperson who challenged her circumstances and physical disability to overcome the odds to emerge as a winner. An edited extract

Many of my friends suggested that I try my luck in Paralympics. I learned from the Internet that Dr Dabas was the head of Para Swimming Federation of India. His contact number was also available on Google. So I contacted him and expressed my wish. He informed me that he used to frequently visit Chennai for some work and promised to let me know when he would plan his next visit.

After a few months, I contacted him again. He told me that he was about to call and inform me about his forthcoming visit to Chennai. I thought it would be great if I arranged a get-together with all our well-wishers when he would visit Chennai; I needed a venue for the same. So I requested Gita, the head of corporate affairs at my work, for her permission to arrange the meeting in our office. She accepted my request and also agreed to make all the arrangements, including to provide refreshments.

I invited all our well-wishers and the people who had approached me after reading the article in The Hindu; Anand, Dr Karthik (who was my pool mate), Mr Narsa Reddy, Father Antony Samy, Dr Rema Devi, Ms Uthira and Sai were also there. Dr Dabas attended the meeting and explained his efforts to promote para swimming in India through a nice presentation. We then explained our contributions so far and elaborated on our plans to create and increase awareness on hydrotherapy/swimming in Tamil Nadu. The guests also shared their experiences in supporting our efforts. Dr Dabas suggested us to form Tamil Nadu State-level Paralympic Swimming Association and send the participants for the forthcoming nationals to be held in Kolhapur, Maharashtra.

We took Dr Dabas to the Andhra Club pool. Our swimmers exhibited how we practised swimming and sought his guidance to improve our skills. He gave his valuable suggestions to us and appreciated our efforts. We also introduced our coach Gopi to him.

I had a discussion with Anand, Preetha, Dr Rema Devi, Ms Uthira, Sai and other well-wishers. We started the Paralympic Swimming Association of Tamil Nadu informally, with Dr Rema Devi as president, Ms Uthira as vice-president, Preetha as treasurer, myself as the general secretary, Sai as joint secretary, Dr Ponraj as medical direc-tor and Anand as technical director. With great efforts, we convinced Rema Devi aunty to be our president. They treat us like their children, so we all thought their guidance would help us in taking this initiative forward successfully. Mr Narsa Reddy accepted to be our patron. We started to practise swimming vigorously. We tried hard to find more people to train but ended up with only four swimmers: Uthira aunty, Venkatesh, Jyothi and myself.

We all went to Kolhapur along with our coach Gopi. At that time, I was feeling a little under the weather as my stomach was upset. I consulted a doctor and took the prescribed medicines. My friends asked me to reconsider my participation but I didn’t want to lose the opportunity. Our transit time from Chennai to Kolhapur by train was almost 2 days, with a 10-hour layover at Bengaluru. During the layover, we had to wait at the railway station itself. We were all very tired by the time we reached Kolhapur.

Local organizers told us that they could not make the arrangements as planned, as they did not receive the promised funds from the sponsors. We decided to find an accessible hotel for our stay, as we were not comfortable with their stop-gap arrangements.

By the time we reached there, I started to feel better. It was the 11th National Para Swimming Championship, and our team won eight medals. Venkatesh and I won the championship in our respective categories. It was an amazing moment in my life — winning three gold medals (50-m freestyle, breaststroke and backstroke) and becoming a national champion at the age of 40+ years. It was an unbelievable achievement even for me. My joy knew no bounds.

There, I could see persons with different types of disabilities to swim with ease. When I saw blind swimmers maintaining a straight line in the pool, I was very surprised. If I close my eyes for a few seconds, I cannot maintain the line of direction in the pool. I was unable to understand how they managed to do it.

We noticed that there were very few participants from South India in the championship. I thought that it might be due to the general notion that these sports are dangerous for persons with disabilities. In my experience, when I tried to encourage participation of children with disabilities, often their parents were reluctant as they thought that swimming was risky for their children. If I tried to convince them by giving my example, they would respond saying that it was possible for me because I was a superwoman and it may not be the case for their kids. As I drive, swim, work for an MNC etc., they thought that I had some extraordinary skills.

Dr Dabas put up the proposal to host the next nationals to various states; I strongly wanted to accept his offer with three aims. First, to create more awareness in South India. Second, to give confidence to the parents of children with disabilities, officials, and the general public. Parents because, I hoped that by seeing the participation of persons with different types of disabilities and different levels of abilities, they would understand the benefits of hydrotherapy and participation in sports. Also, if the concerned officials understood the benefits and the possibility, then the persons with disabilities would get more support. Finally the third, to conduct championships at par with other Olympic sports events. I observed an inferior feeling and sympathy towards adaptive sporting events among the public instead of treating it like any other sporting event.

Anand also agreed with my views, and we thought of discussing with our association members. On the way back, our coach told us that IITM had a pool with international standards, and if we requested accommodation there, it would be easy to host the event in Chennai. After coming back to Chennai, we called for a meeting with all our members. We all knew that it was going to be a very challenging task. In the meeting, we decided to first register our association officially, and soon thereafter started that process. Dr Rema Devi, with the support of her husband, arranged for an office address and to fulfil all the statutory requirements to register the association and for its functioning.

Also, after coming back to Chennai, we got a lot of media coverage on our achievements in the championship. I gave so many interviews. Everyone wanted to take a video or a photograph of me while swimming for an article. It gave me an opportunity to create more awareness about hydrotherapy/para swimming. Till then, I was the one to reach out to the media, schools and colleges. But now, they started to approach me. It made my job to create more awareness much easier. These articles reached a wider audience, and I received a few invitations from outside Chennai.

At that time, I got an opportunity to give a talk at IITM. I felt very happy. I was looking for an opportunity to connect with them so I could request them to allow us to host the national championship in their pool. My talk was received very well, and I got a standing ovation. Later, I came to know that their pool was under renovation. All my hopes were shattered.

After my talk, many professors wrote to the director of IITM, Professor Bhaskar Ramamurthi, to incorporate the suggestions I gave in my talk to make their pool accessible; he responded to their suggestions positively. The concerned staff from IITM were in touch with me. Later, I connected them with Dr Hutzler for his guidance on the accessible swimming pool, whom I met at a conference in Coimbatore.

Excerpted with permission from Swimming Against the Tide: True Story of Para Swimmer by Madhavi Latha Prathigudupu, published by SAGE Publications India