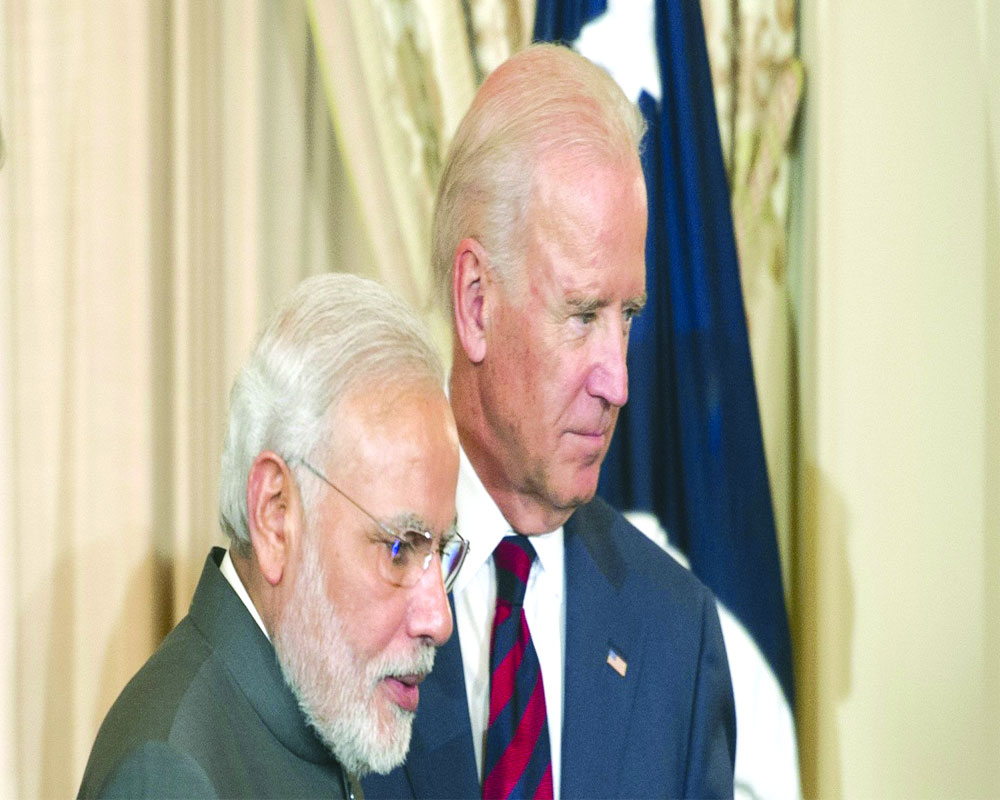 There has been understandable concern in India at the change of guard in the United States of America on January 20 after the election of Democratic candidate Joe Biden as the new President, particularly since the bilateral relations registered remarkable progress under President Donald Trump, given his determination to deal with China headlong and his hard-line views on Pakistan’s complicity and direct involvement in international Islamic terrorism. Trump was outspoken and made his point without any prevarication which was liked in India. Warm personal chemistry between him and Prime Minister Narendra Modi also, no doubt, has been seen as a positive contributing factor.

However, it needs to be noted that Biden has been very supportive of strong ties with India. As Chairman of powerful Foreign Affairs Committee of the Senate, he played a pivotal role in getting the India-US civil nuclear cooperation agreement cleared. Later, he served as Vice President in the Obama Administration when the US and India signed LEMOA paving the way for India’s recognition by the USA as a “major Defence partner” and licence- free access to a wide range of dual use technologies.

Writing in an ethnic Indian community journal, Biden promised that his administration would “build on the great progress” made in the relationship with India during Obama years. He also asserted that India and the USA “can and should be natural allies”. Significantly, Prime Minister Atal Behari Vajpayee had also described the India-USA relationship as being that between natural allies.

In geo-political terms, it is widely expected that the firm line against China initiated under the Trump presidency would broadly continue because of rather combative stance of China, which seems to be in a hurry to assert its primacy on the global stage. Its aggression against India and other neighbouring countries surrounding South China Sea has also not gone unnoticed by the Biden team. In fact, Secretary of State nominee Blinken has been on record as having said that “strengthening and deepening of relationship with India is going to be a high priority” for the US particularly in the context of its objectives of peace, stability and rules-based order in the Indo-Pacific region.

Under these circumstances it can be expected that the USA under Biden would continue to regard India as a “key partner”. Notably, India’s External Affairs Minister Jaishankar, while commenting on this issue, expressed his confidence that Indo-US relations could only move up further in the coming months.

The presence of Kamala Harris as Vice President and likely induction of several persons of Indian origins (PIOs) in senior position in the new administration is also a factor which would favourably impact on the bilateral relationship. In fact, election of a PIO as the Vice President of the country itself is a landmark development. The credit for it obviously goes to Biden for having chosen Kamala Harris as his running mate, but it also signifies the coming of age of the vast and influential Indian community in the USA. It is well recognised that given their large numbers and relatively high income levels, PIOs in the USA have begun to play increasingly salient role in the country’s politics and in providing a generally positive thrust to furthering India-US ties.

In the last two decades there has been a steady and continuing growth in Indo-US Defence and intelligence cooperation despite government changes in both  countries indicating a broad bipartisan support on both sides for closer relations. Shared democratic and liberal values and generally positive perception that both countries have about each other have, no doubt, contributed to creation of a positive climate but there  is no denying that  common threat from China and consequent convergence of geo-political interests has mainly brought the two countries together.

Starting with the “General security of military information agreement” in 2002, India and the USA have now completed the full spectrum of foundational Defence agreements at the recently concluded 2+2 dialogue with the signing of BECA providing for sharing of geo-spatial intelligence. In the meanwhile, the USA has also eased export restrictions on India for high tech equipment, including sensitive Defence technologies by designating it as a “Strategic Trade Authorization-1 (STA-1)” country even though India is yet to gain entry into the NSG club. In fact, the USA has emerged as a major arms supplier to India over the last few years. This momentum is bound to continue because both countries face the joint challenge of countering China’s growing military weight. India and the USA also actively cooperate in countering terrorism, another major threat to the world peace and stability. There are understandable concerns in India about the need to maintain country’s strategic autonomy but that does not get compromised by a closer military coordination with the USA in order to deal with our existing security threat perception.

India has a massive economic and commercial relationship with the USA with trade in goods and services totaling $150 billion. Unlike China with whom we have a huge deficit, India enjoys considerable trade surplus with the USA. Energy partnership has also emerged as an important constituent of that relationship contributing greatly to India’s quest to diversify its sources of energy supplies.

Biden has been quite emphatic about bringing the USA back into the Paris Climate Accord and in ensuring greater coordination and alignment with the allies on global political and economic issues. India’s sterling record on promised reduction of emission levels jells quite well with his priorities.

It is widely expected that under Biden, the USA will seek to reclaim its centre stage role in global affairs which could, inter alia, see it playing a reinvigorated role in Indo-pacific region involving closer coordination with India and traditional allies such as Japan and Australia, including military and maritime exercises to enhance inter-operability both in bilateral and “quad” framework.

The onset of Covid-19 pandemic which has affected millions across the world resulting in heavy casualties would in all likelihood deepen the fissures between China and the western countries. China’s dubious role in the spread of virus and suppression of information in the early stages has already come in for sharp criticism by western leaders and general population alike. Consequently, one could well see the western countries acting in concert to keep China’s rise in check and India could play a pivotal role in that effort.

They would also move at least some of the manufacturing facilities out of China and India could offer itself as a credible alternative if we are to take further steps to improve the manufacturing climate in India and bring our practices and regulations more in line with the international best practices.

To conclude, the evolution of geo-political dynamics in the Indo-pacific region and indeed the world at large and emergent threat from China’s aggressive posture would require both India and the USA to continue to work as close strategic partners. Based on current indications and affirmations on both sides, the cooperation between them at the Government level is likely to further solidify in Biden presidency.

(The writer retired from the Indian Foreign Service a few years ago after having served as Indian Ambassador in several countries and continues to take active interest in foreign policy issues. He is currently president of well-known NGO Antar Rashtriya Sahyog Parishad).