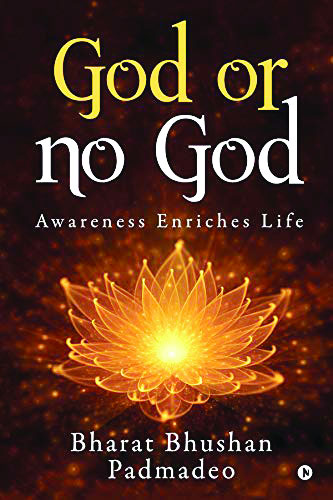 God or No God: Awareness Enriches Life is a ratified statement claimed by many but understood by very few & Bharat Bhushan Padmadeo is among a few who dares to demystify the basic system of enquiry, writes Pradeep

Someone asked Swami Vivekanand: “Can we become Godlike?” “First become a man,” he answered. It literally implies that if full human potential (mind-power) is unfolded, one would know no limits. And it is very much achievable through conscious efforts, as did Ancient India’s learned masters, to have captured subtle realities of life operative at even intangible level. So, raising human capital is more important than exploring and seeking God. That remains the real human calling, is how the book concludes, which makes the book an interesting read.

God or No God: Awareness Enriches Life is a ratified statement claimed by many but understood by very few. Bharat Bhushan Padmadeo is amongst those few who dared to accept the challenge and demystify the basic system of enquiry.

In modern times or precisely in this industrial age, every idea or belief demands an objective explanation. In this new framework of understanding, the concept of GOD is a most vulnerable idea. Leaning to some particular idea or school to rationalise existence is a matter of abandoned schools. Science sets up new logic and premises of rationals to support or reject conceptual realities. Whole discussion of existence is evolving around uncertainty, probability and unpredictable circumstances and tools to gauge them perfectly.

This book is remarkable because it changes the very basis of argument about existence from uncertainty to probabilities. It states that the process of understanding is far more important than the modes of happening or object itself. Writer argues that perception itself lies within the realm of being and awareness about it.

Significant character of twentieth century philosophy was departure from any faith unexplained or underexplained. It was rated as blind faith or fundamentalism to a large extent. Renowned philosopher J Krishnamurti argues, if you are free from sorrow and hate you don’t require God. Whereas Gandhi’s whole philosophy of non-violence is centered around God. So the space of argument is divided between the two premises: “God or No God”. Many more fell in line either rejecting or accepting the existence of a super controller as GOD.

Padmadeo in this book argues that precursor to both is the same. The bearer of belief is consciousness, and understanding its existence is awareness. So, it is not important whether you believe or not, important is that you are aware or not. He wrote: “Consciousness, in fact, rightly deserves to be marked as fourth dimension, vital to creation. It should not be seen as being in conflict with the perception of modern science, which assigns the fourth dimension to space and time. This particular fundamental element has been named as consciousness because it grants us with the power of knowing, besides granting necessary intelligence to other functional aspects of our individual and collective organism.”

While frequently quoting scientists like Max Plank and excerpts from Kashmiri Shaivism, he kept on building necessary bridges between science and theology. In other words, instead of dividing the argument into science or believing, he is indicating the science of awakening.

Explaining uncertainty and unpredictability, the book postulates that mind which itself is an area of study by itself creates most paradoxical results. It explains explicitly that consciousness is the prime mover. While exploring the construct of mind and body-mind connect, writer explains its extra cerebral existence as an interactive phenomenon which comprehends undiscovered psycho-landscapes. Dr. Karan Singh writes precisely in the foreword of the book that writer has reinterpreted our ancient spiritual verities in the light of contemporary intellectual scene, paying attention to the infinite potentialities of human mind, which if unfolded in full would know no limits The basic take home message of the book may be comprised as raising level of consciousness leads to the fact that “Existence is God”. This process may be called as enriched awareness.

As conclusive remark this extremely engaging book demands an independent and fearless conviction to internalize the source and negating the fundamentalism of believes and faiths. It sets a new mode of enquiry within. This book is an invitation to quite undulating and challenging experience like awakening itself might be.