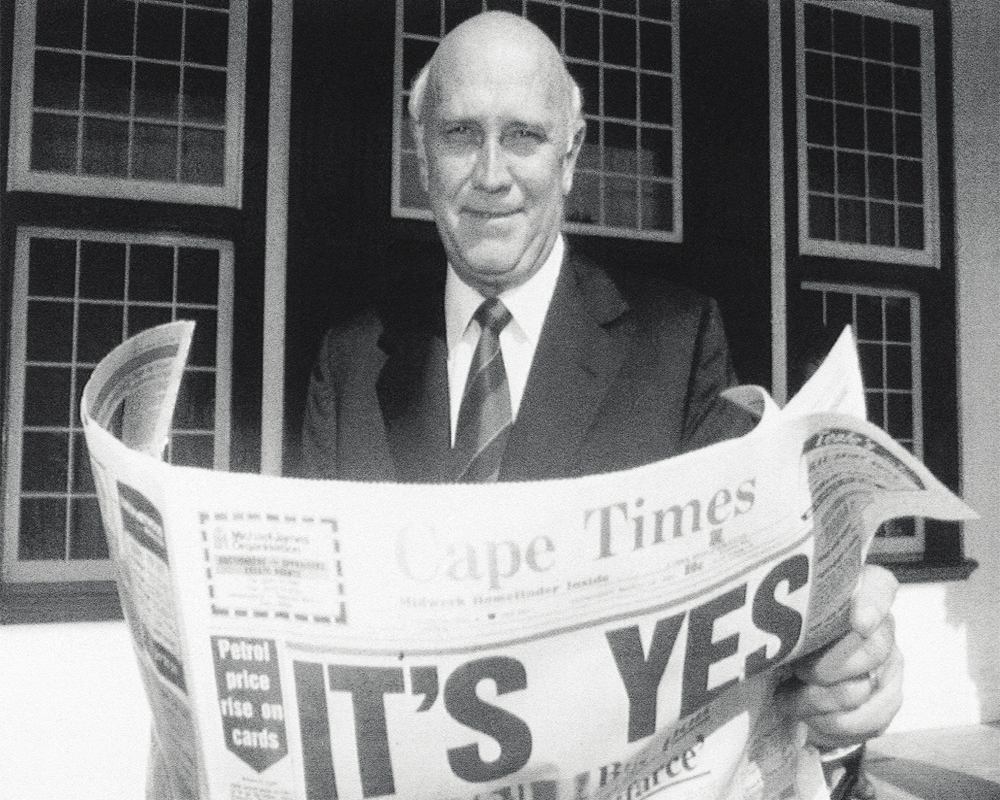 The infamous apartheid regime in South Africa came to an end with a series of discussions and dialogues between 1990 and 1993. This was the result of unilateral steps initiated by the de Klerk Government. These negotiations took place between the governing national party, the African National Congress (ANC) and a host of other civil rights groups belonging to different parts of South Africa

The last leader of the notorious apartheid era of South Africa, FW de Klerk, died on November 11 at 85 at his home in Fresnaye (a largely affluent white dominated locality of Cape Town situated between Signal Hill and Sea Point) after suffering from Mesothelioma, a type of cancer that is associated especially with the exposure to asbestos.

He won the Nobel Peace Prize along with Nelson Mandela for ending apartheid in 1993. He presided over a brutal regime that killed men, women and children to safeguard one of the most anti-human political systems that ever existed in world history. Its centrality lied in dehumanising people of colour and destroying the very spirit of humanity. It simply exemplified segregation of the white minority from the Africans and the rest of the colored people of the country, backed by an institutionalised system purely presided over by the Whites.

The Doctrine of Apartheid was made law in South Africa in 1948 when the Afrikaner Nationalist Party came to power. The word “apartheid” is originated from the Afrikaans language meaning “apartness”, or “separateness”. This apartheid called for separate development of different racial groups in South Africa.

The infamous apartheid regime in South Africa came to an end with a series of discussions and dialogues between 1990 and 1993. This was the result of unilateral steps initiated by the de Klerk Government. These negotiations took place between the governing national party, the African National Congress (ANC) and a host of other civil rights groups belonging to different parts of South Africa.

In retrospect, it seems that various punitive measures invoked from different quarters of the globe, accompanied by the efforts made by the ANC, forced de Klerk Government to abandon the apartheid system.

Many of these international initiatives were not to pressurise the leading parties in South Africa to engage in a process of negotiations but simply to end the apartheid era. Subsequently the proponents of constructive engagement and most notably the Conservative British Prime Minister Margaret Thatcher were able to convince de Klerk to talk to the ANC.

Besides, by late 1980s, the Soviet Union and many other African Governments encouraged the ANC to negotiate a political solution to the apartheid.

He left a troubled legacy behind. He was a key political figure in the long journey of South Africa’s transition from deadly apartheid regime to a modern democracy. He came to power in 1989 and continued till 1994 as the head of the South African State. And the iconic figure of the anti-apartheid era, Nelson Mandela came to power after him and scripted a new history by

being the first ever black President of the country.

Interestingly, following his death, the FW de Klerk Foundation released a unique video worldwide-dubbed “final message”, in which he frankly spoke about the horrors of apartheid system of the yesteryear. In the message, he said, “Let me today, in the last message repeat: I without qualification, apologise for the pain and the hurt, and the indignity, and the damage, to black, brown and Indians in South Africa.” On his death, the fifth black president of the country Cyril Ramaphosa said de Klerk’s death should inspire all of us to reflect on the birth of our democracy. Indeed, it is the moment of reckoning for all the coloured people of South Africa who had to undergo all sorts of harassment and insult under the successive white Governments in the country.

And the one presided over by de Klerk brought the brutality to an inconceivable level. Apartheid practised in his country was widely recognised as a crime against humanity. Probably, de Klerk must have realised the sins committed by the white regimes in South Africa and read the writing on the wall very cautiously. He described himself as a “convert” in an interview in 2012. He said, “We should have gone much earlier with the flow when the winds of change blew across Africa.”

It simply indicates his sincere realisation of the evil effects of the racial discrimination prevailed during his presidency.

On record, de Klerk had been a firm believer in the system of racial segregation of people in South Africa. Therefore, even after his retirement from active politics, he remained a divided figure in public square. He was very much reluctant to condemn the apartheid system unequivocally. Though he was a staunch conservative politician, within his five-year rule from 1989-94, he gradually realised the futility and the deep divide in the system of apartheid. Thus, he became an unlikely agent of change in his conservative clan and heralded the new light of multi-racial democracy in that country.

Although the relationship between de Klerk and Mandela was quite often characterised by sharp disagreements, the new president always described the last white President as someone of great integrity. That indeed showed how Mandela wanted to bridge the gap between the powerful white minority and the rest of the coloured people of his country, by recognising the uphill task of rebuilding a multi-racial nation.

On February 1992, he came to Parliament of South Africa with a historic declaration — Nelson Mandela would be released from prison after a 27 years sentence, legalisation of anti-apartheid groups, end of a national state of emergency and finally, the beginning of negotiation to end racial inequality in South Africa. The announcement electrified the whole nation that for decades had been scorned and sanctioned by many nations and international organisations. Apart from these, South Africa witnessed severe isolation from the international community. With South Africa’s isolation deepening and its once robust economy deteriorating, the de Klerk Government was forced to lift the longstanding ban on the ANC and other anti-apartheid groups.

He remained truthful and strong till the end of his life. His was an era of divisive politics. But he oversaw the transition of South Africa from a pariah state to one of a multi-racial democracy. Of course, his was a troubled time. Even after his announcement of the end of apartheid, many conservative lawmakers in his country brand him as a traitor, as racial tensions and the possibility of a civil war were looming large.

However, he survived all and came ready to serve as the deputy of Mandela, once his bete noire. Though many would still love to hate him, millions would see in him a harbinger of a new age, with deep realisation of the atrocities of racial segregation. Surely, he was not sole factor in bringing an end to the apartheid. Therefore, once he spoke, “When I talk about the end of apartheid, I prefer not to claim the honour that I have ended it.” Today all of us must be grateful to him as he recognised the moment of change and had tenacity to take the South Africans to a new dawn. Nonetheless, he left a complicated legacy, while in power, after retirement and in his final journey.