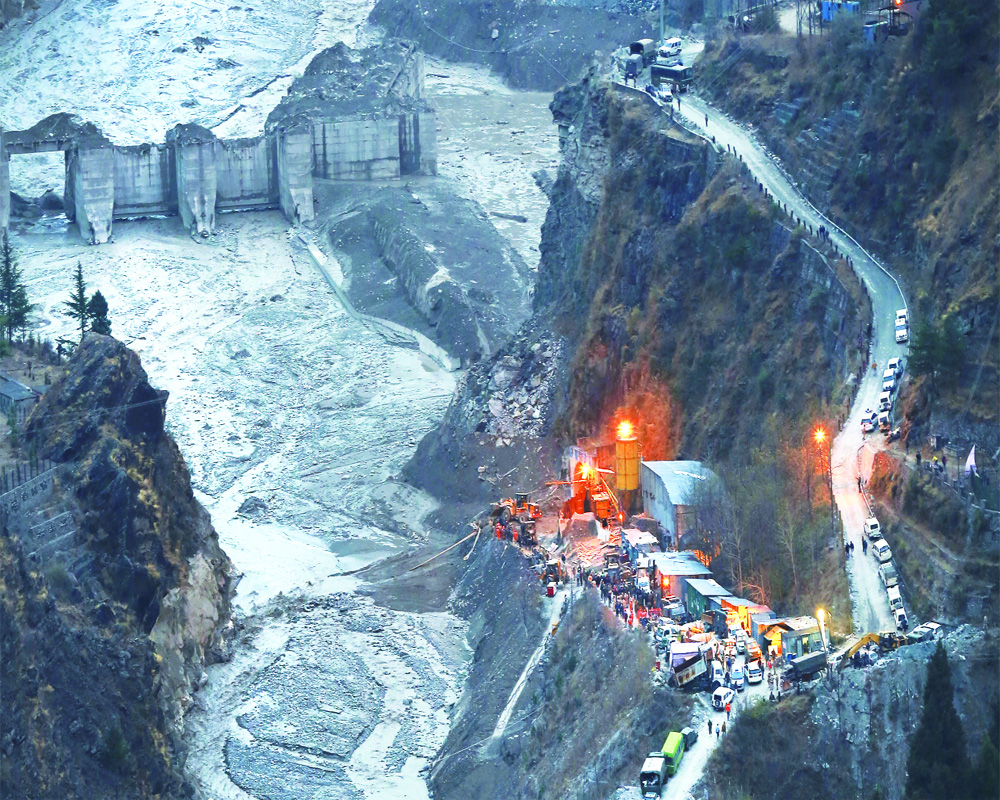 This is not the first time that a disaster has occurred in Uttarakhand where over 85 per cent of districts, home to over nine crore people, are hotspots of extreme natural calamities. SHALINI SAKSENA speaks with experts who talk about what triggered the landslide-ice avalanche and how worrisome this phenomena is

Over 85 per cent of districts in Uttarakhand, home to over nine crore people, are hotspots of extreme floods and its associated events. According to an analysis by the Council on Energy, Environment and Water (CEEW), frequency and intensity of extreme flood events in the State have increased four-fold since 1970. Associated flood events like landslides, cloud bursts and glacial lake outbursts have also increased four-fold during this period.

Abinash Mohanty, programme lead at CEEW, tells you that the recent devastating flash flood in Uttarakhand is a proof that the climate crisis can no longer be ignored. “In the last 20 years, the State has lost more than 50,000 hectares of forest cover, leading to micro climatic changes in the region. This in turn has triggered a rise in extreme climate events. A focus on land use-based forest restoration could not only reverse the climate imbalance but also help promote sustainable tourism in the State. Equally important would be climate proofing of infrastructure, investments, and policies,” Mohanty says.

The tragedy in Uttarakhand reiterates the need for detailed district-level climate risk assessments and enhancing adaptive and resilience capacities. With the rising frequency of extreme climate events, India needs to urgently develop a nationwide but decentralised and structured, real-time digital emergency surveillance and management system.

Dr Mohd Farooq Azam, assistant professor, Glaciology & Hydrology, IIT Indore tells you that the earlier observation made by the team that he is a part of, has to be revisited.

“What took place is far more complex; it was a combination of landslide and ice avalanche on a hanging glacier. This brought down a lot of debris with it. This kind of phenomenon is commonplace and happens on a small scale. Our team, composed of two dozen scientists from across the globe, to our best understanding have an explanation; it is the failure of a bedrock of a hanging glacier. At present, it is too early to predict how that water came to be inside the glacier,” Azam says.

He tells you that the source of the water of this flash flood that carried with it lots of debris had a concentrated mixture of everything. “Where this water came from can’t be ascertained for now. There was friction and due to the heat produced the ice melted and mass of it fell from 5,000-6,000 feet. But we believe that there is another reason for this water,” Azam and his team members opine.

Even though this slide happened on a hanging glacier, not uncommon, there are reasons to be worried. With global warming and climate change, such events will increase even though it is a natural phenomenon. Snow accumulating at high altitude, after a period of time becomes too heavy to hold and it comes down in the form of snow avalanche. Global warming makes such occurrences frequent. Second, it is worrisome for people living at high attitudes.

“There are settlements below hanging glaciers, below water bodies, glacier lakes and below steep slopes that are unstable. We have to think of ways to mitigate disasters from taking place. We have had many wake-up calls in the past, this is yet another one,” Azam says.

This means that the development that is taking place in this region needs a fresh pair of eyes. While one can’t turn away from construction of roads, there is a sustainable development that takes into consideration the vulnerability of this region. “Economic growth and environment needs to be balanced and worked at with care,” one is told.

Deforestation, Azam says works in two ways. “When trees are cut, that particular area absorbs more heat, this is a local phenomenon. When there is local heating, it will dissipate in the environment. There will be immediate local effect leading to global warming,” he says.

Other contributors to such disasters in the region points to the fact that the Himalayas are young mountains and continue to grow. “In December 2020, when the height of Mt Everest was taken it has grown by 0.86 metres. There are bound to be tectonic activities. The possibility of landslides increases even with no global warming. The phenomena at work here are complex and work together,” Azam says.

Arun Krishnamurthy of Environmentalist Foundation of India believes that in an era of climate change, abnormal and sudden nature events are becoming frequent rather than rare.

“As one of the most vulnerable eco-systems, the Himalayas and the upper glaciers are threatened. Therefore, more than being worried, one has to be prepared. We have to be prepared for such an anomaly. We are still unclear on what is in store to even identify the problem to its full extent. Destruction of habitats, unplanned urbanisation and exploitation of natural resources should be heavily curtailed to prevent the worsening of the situation,” Krishnamurthy says.

According to him, one could not have stopped this nor prevent future occurrences. “The current emission levels globally do not give us a sign of recovery. The short lived lockdown restrictions and the ensuing industrial normalcy clearly indicates that we are not looking at cutting down on emissions in a manner that would positively impact the climate,” Krishnamurhty tells you.

According to a report released by the Ministry of Earth Sciences , the Hindu Kush Himalayas experienced a temperature rise of about 1.3°C during 1951-2014. The increase in temperature has led to micro-climatic changes and faster glacial retreat in Uttarakhand, thereby triggering frequent and recurrent flash floods. In the coming years, this could also impact 32 major ongoing infrastructure projects in the State.

The CEEW analysis also highlighted that droughts had increased two-fold in Uttarakhand since 1970 and more than 69 per cent of districts were vulnerable to it.

Dr Anjal Prakash, research director and adjunct associate Professor at the Indian School of Business, Hyderabad tells you that there is no denying that global warming has impacted glacier melting according to IPCC Special Report on Oceans & Cryosphere in 2018. The Himalayan Assessment Report by International Centre for Integrated Mountain Development in 2019 also corroborated the same.

The IPCC Special Report on Oceans & Cryosphere, Chapter 2 says: Glacier retreat and permafrost thaw are projected to decrease the stability of mountain slopes and increase the number and area of glacier lakes. Resulting landslides, floods, and cascading events, will emerge where there is no record of previous events. There is also high confidence that the number and area of glacier lakes will continue to increase in most regions in the coming decades and new lakes will develop closer to steep and potentially unstable mountain walls where lake outbursts can be more easily triggered by the impact of landslides.

“There are a few take aways. These kind of climate-led events will increase in magnitude and frequency. The problem with climate-led events lies in its unpredictability. All one can say is that the event will take place. But when would be difficult to monitor; the time can’t be pinpointed. One can say that cyclones in Odisha will increase but can’t say when they will occur. The same holds true for glaciers,” Prakash says.

The Hindu Kush Himalayas has 54,000-plus glaciers spread across eight countries with 10,000-plus in India and 1495 in Uttarakhand alone. “However, only a few are being monitored especially in Nanda Devi region. There is need for closer monitoring because such events will only rise,” Prakash tells you.

Eastern and Western Himalayas are vulnerable because this mountain range are young fold mountains. The landforms have not solidified. What makes Uttrakhand’s position more precarious as compared to other regions along the Himalayas is the rampant construction, population increasing 50-fold and 640 km of river flow being diverted for more than 70 dams.

“One needs a different trajectory of development and understand the eco-system of the region. One is cutting trees to construct hydro power stations. Trees are first line of defense against any disaster. Lower mountain regions need to be forested,” Prakash says and cites an example of a tunnel construction. He tells you how a tunneling in Sikkim had disturbed the flow of a local water body. Due to the construction, the stream had started drying up.

“The present nature of construction across the country is masculine — the need to control and capture as much as possible — has to be changed. What is needed is a feminine approach. Go along with Nature; work with it. Protect the Nature, it will protect you. Lack of resilience is another cause for this disaster. There is need to have a resilient development approach. All the planning has to take environment and climate change into consideration even before one breaks the ground. Second, the infrastructure has to be resilient to any disasters. The climate in hill regions fragile. For every one degree of rise in temperatures in plains, it is equivalent to 1.5 degree C rise in the mountains due to elevation-dependent warming,” Prakash says.

Dr DP Dobhal, former scientist at the Wadia Institute of Himalayan Geology in Dehra Dun corrobates what Azam says that says that it was  a snow avalanche that triggered the disaster on the early morning of Febraury 7, 2021.

“It brought with it a lot of mariane debris downstream causing loss of lives and loss of property that it was in its path. Since it was a vertical fall, the force was high and flowed into the gorge. With it took two hydel power stations as well,” Dobhal explains.

This phenomenon is common in the region that takes place at over 5,000 feet altitude; such hanging glaciers are commonly found at this height, near main glaciers.

“Any movement will lead to its breakage. The reason for such mass destruction was due to the intensity of the fall. Global warming is leading to glacier melting leading to small lake formation. Snow cover is reducing. It is important to look at the topography and look at the frequency of landslides and avalanches. Unfortunately, hanging glaciers are difficult to monitor. Every aspect needs to be looked at before any construction is done,” Dobhal says.

One main reason to be alarmed is that we have lost a source of fresh water. “With such a large chunk of ice breaking away, we should be alarmed, but we can take heart that events are rare. There is a possibility that where the breakage has taken place, the main glacier is there only. Next year, when it snows, what is broken will get replenished even if it takes time. If the depression is deep and wide, there is a chance for this glacier will mend itself over a period of time,” Dobhal says.