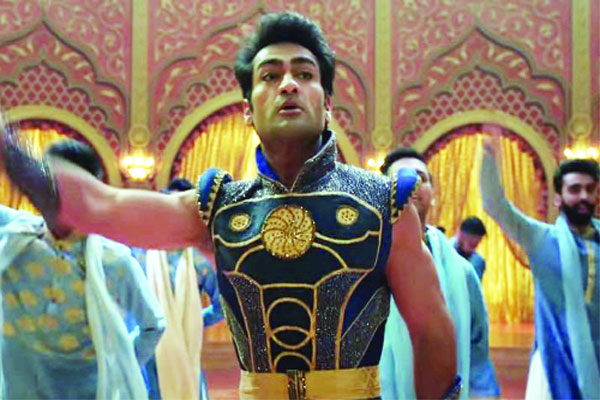 SARAN KOHLI, a London-based Indian designer made headlines for all the right reasons. He has designed 52 costumes for Marvel’s Eternals. MUSBA HASHMI chats him up about how he got the opportunity of a lifetime and the nervousness and excitement that came with it

In October of 2019, while Saran Kohli was busy doing his everyday chores, he got what he thought was a normal work call. He had answered it without having a mere clue of who or what was there at the other end of the phone.

While the not-so-excited Kohli spoke on the phone, there’s nothing much he was able to decipher except for the fact that he has been called to Pinewood Studios.

“It’s one of the biggest studios of the country. I thought it must be some Bollywood movie being shot there or a big-budget Hollywood one,” Saran Kohli, a London-based Indian designer, tells you.

Kohli had no idea of what was about to happen. When he finally visited the studio for the meeting, accompanied by some of his designs, he was still clueless of the opportunity standing right in front of him.

The team at the studio was extremely welcoming and professional. Everything was going smoothly. Praises came Kohli’s way and he was made to sign a non-disclosure agreement. Marvel’s Eternals it was.

Kohli was surprised, anxious, nervous, excited all at the same time. He picked himself up, tried to remain calm and asked the team: Why me? Because we have seen your designs, heard about you and have chosen you, the other person replied.

That was Kohli’s one of the most cherished moments. The experience, Kohli says, has been surreal and there’s nothing more he could have asked for.

During the meeting with Paula, one of the team members at the studio, Kohli was handed over a print out of an arabian sky with hues of pink and blue. That was what they wanted to achieve with the costumes, without disclosing too many details. “That’s when the process begun. We started discussing ideas back and forth. An hour into the meeting, the conversation and, of course, we all became very comfortable. That’s when they told me it is the first time that they are introducing a Bollywood style dance sequence and that is why we wanted you on board,” Kohli recalls.

Walking out of the studio that day, Kohli says, he was like a kid at the candy store. “I was jumping around with joy. It was something I never ever imagined,” he exclaims.

And for that sequence, Kohli needed to design not 10 or 20, but as much as 52 costumes. Now, 52 costumes meant 52 different ideas and a lot of hard work. “While people might say that all the costumes are similar and a replica of one design, it is not. Simplest things can always be the most complex things and this was an example of this. People may say: ‘Oh it’s just blue and pink’, but there were six hues each of pink and blue. The design and pattern for the darker hues was different from the lighter ones. Each costume had several layers of design. Every pattern was different enough to be an individual design, yet similar enough to blend with the palette. To break these, was a task. We worked on these for two weeks straight,” he tells you.

The design and the production work was to be done in four weeks, he adds. Though four weeks seem to be a very short time, but for Saran, everything went according to the plan because of all the in-depth discussions and a well prepared team.

Also, unlike some of the Bollywood movies or series, there were no last moment goof ups. Instead, Saran was confident of his designs. “I was confident of my designs.  The only thing I was nervous about was the reaction of the Marvel team, because there is always one or the other person who wants to make a change. During the process, my main thing was the costume fittings and that we don’t have to face too many hiccups in the process. There’s no one size fits all scenario. You have to get it right. That’s what the nervousness was all about,” Kohli, who was designed costumes for several Bollywood films too, explains.

Unlike Bollywood, Kohli says, here their focus was on all the technical details. The movements of the dancers had to come clean and the fittings and cuttings of the costumes had to be done with that in mind. “The Marvel team gave me a detailed brief about the lehenga cuttings, the blouse adjustments and each and every thing. They pay attention to the smallest of details. Whereas in Bollywood, people only focus on the hero and heroine’s costumes and not  much on the background dancer’s,” Kohli says.

If you happen to scroll through Kohli’s Instagram handle, you will understand that all the recognition is well deserved. Another highlight of his work is the Vitiligo masks. “I also have Vitiligo. My aim was to create awareness about the skin condition and make people talk about it,” he says.

However, not all is easy when it comes to creativity. There are creative blocks. Kohli faces them frequently. “It is natural. All I do is relax and look for inspiration. Sometimes I struggle and continue to complete a design, while the other times, I take a break for a couple of days. It is about finding motivation and interest. There’s no rocket science. Stay patient and calm, things will turn out good, at least believe so,” he advises.

Being in the industry for years, the one thing that put him off is the lack of professionalism and mutual respect.  “When you work together, there’s has to be mutual respect between people. There are times when you do face some unpleasant situations. You just have to be thick skinned,” he concludes.