Scourge of child labour: No end in sight

Scourge of child labour: No end in sight 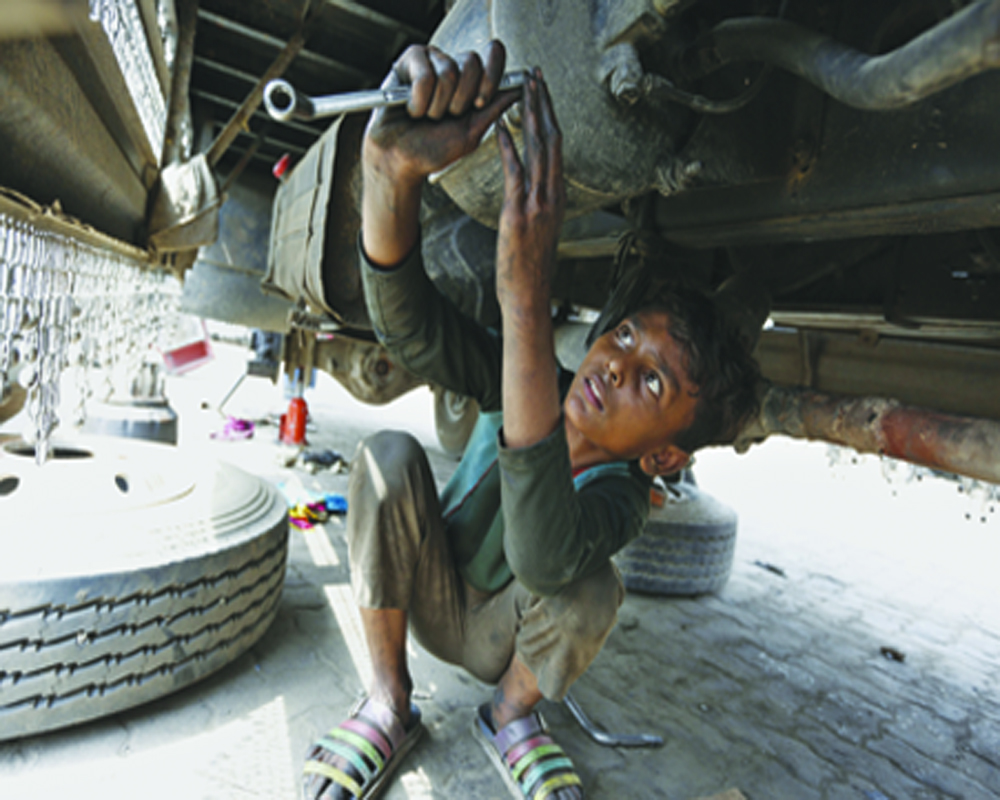 Until a holistic approach is taken where the parents' need to push children into child labour is obviated, the scourge of child labour — aided and abetted by Covid-induced economic slump — is there to remain for long

Childhood is the most beautiful journey of life, and children are the future of the country. The UNICEF emphasises that every long-term plan for human resource investment or human resource creation should begin with children, but this is not the case; today child labour is a worldwide problem.

According to the latest report (June 10, 2021) jointly published by the International Labour Organisation (ILO) and the UNICEF,  the number of child labourers increased to 160 million from 152 million in 2016. The report says that 10 per cent of total children are involved in gainfully employed worldwide.

In India, there are 20 million child labourers, as per the Government statistics; however, the ILO puts it at 30 million, of which about 20 per cent children work as domestic helps. According to the Indian Constitution, a child between 5 years and 14 years is considered a child labourer if s/he does paid work for livelihood or to pay back family debt through labour; while the United Nations considers a worker below the age of 18 years as a child labourer.

The compulsive urge for a child to indulge in menial labour is primarily driven by family destitution. Children are thrown into risky, back-breaking labour to lend their family a helping hand for sustenance. Unemployed parents send their children to work. And as most of the employers seek cheap labour, children who can’t negotiate wage or working conditions are the best workforce.

The child labour class is contributing about 6 per cent to the Gross National Product. Andhra Pradesh and Uttar Pradesh have the maximum number of child labourers. About 45,000 children are employed in Tamil Nadu’s Sivakasi firecracker and matchbox factories. There are 50,000 in the Firozabad glass industry. A large number of children are employed in stone grinding in Jaipur, in the Moradabad brassware industry, in the Aligarh lock making units, in the slate making in Markapura (Andhra Pradesh), and in the carpet industry in Mandsaur (Madhya Pradesh). Apart from this, there are million others employed as domestic helps, restaurant waiters/waitresses and street vendors.

The Government is empowered to make separate laws for children by Article 15(3) of the Constitution. There were several legal provisions to safeguard the childhood; for example Article 23 prohibits the buying and selling of children and their doing illegal and immoral acts and Article 24 prohibits employment of children below the age of 14 in factories, mines and industrial establishments.

In 1986, the Child Labour Prevention and Regulation Act was enacted. In 1996, child labour in hazardous industries was declared illegal by the Supreme Court. Child labour cells were formed.

The “National Agenda” (1998) announced by the Government demonstrated the commitment of the Government to make special efforts for education, nutrition and medical facilities for children. Programmes like Rashtriya Shishu Sadan Yojana (1994), Mid-Day Meal Scheme (1995), Balika Samadhi Yojana (1997), Udisha Yojana (1997), Kishori Shakti Yojana (2000), etc, aimed to end the scourge of child labour. But all these efforts proved insufficient due to irresponsible administration and the compelling situation of the parents’ destitution.

To eliminate the problem of child labour, the Government should provide employment to the parents of children, so that they can maintain their family and children do not need to indulge in paid work. Attention should be given to agricultural development so that the parents of rural children can become self-dependent and the children do not face the lack of job opportunities. Social organisations should spread awareness against child labour.

Some employers abuse child workers, especially girls, mentally and physically.  And they continue to break with impunity the laws protecting children because the law enforcers either don’t take the child labour seriously, or the child labour has become an established social reality.

The problem of child labour is a problem related to socio-economic background, which can’t be eliminated without strong willpower and effective steps.

The study shows that in today’s consumerist era, the market forces are increasing day by day. Sensitivity and morality have no place in the market, so the respect for labourers is also decreasing and cheap labour is being promoted in the form of children.

Until a holistic approach is taken where the parents' need to push children into child labour is obviated, the scourge of child labour — aided and abetted by Covid-induced economic slump — is there to remain for long