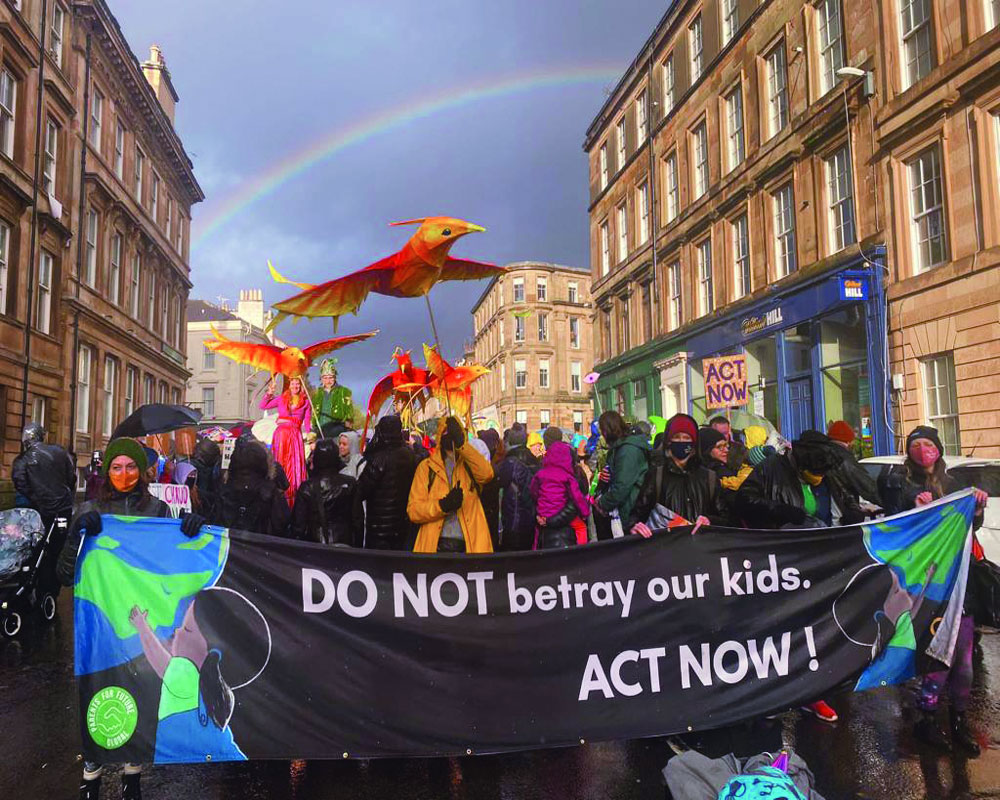 Joining biggest mobilisation ever with parents all over the globe at the 26th United Nations Climate Change conference, Glasgow, Warrior Moms demanded no new fossil fuels to fight against air pollution. SUPRIYA RAMESH brings you a report

Warrior Moms is a Mothers For Clean Air initiative. An ideation and action group that transcends language, demography, and location. They fight against the common enemy— toxic air. A collective of mothers from all over India fighting for children’s right to breathe clean air joined hands in September 2020 on the first UN international day of clean air & blue skies. “If one suffers, everyone does. Therefore, It was time to band together and not only be the change, but demand change as well,” says Kandhari.

By creating awareness on sources of air pollution and climate change, educating and empowering citizens to take action and engaging with decision-makers to enforce regulations, warrior moms promise to fight the battle for clean air for all children.

With their rallying cry, ‘Enough is Enough’, the Warrior Moms raise the collective voices to bring back clean air for children. “As mothers, the common pledge that most of us took when our child entered this world was to protect them and provide the best of everything we could afford. The best schools, the best food, the best facilities, and the best healthcare. When the very air we breathe starts choking us and causing various health ailments- it is time to step up, raise our voices for the future of our country and the well-being of our families,” she tells us.

Warrior moms empower other mothers to know the laws and complain if they see violations. “It’s called ‘Know Your Rights!” Kandhari exclaims. The group is action-based but sure enough, doesn’t shy away from advocacy at any point when it’s needed.

“We stress on strict enforcement of laws that exist to support clean air. Could be on tree felling, waste burning, crackers, vehicular emissions, construction dust, waste management or thermal power plants,” she explains.

Every person above the ordinary has a certain mission that they are called to fulfil. Warrior moms’ mission is to ensure implementation of World Health Organisation (WHO) air quality standards all over India by demanding accountability from public and private authorities on air quality abatement plans, engaging with relevant stakeholders on proven cost-effective solutions and growing and building the capacity of more mothers to join the movement and effect change.

According to WHO,  98 per cent of children in India breathe unsafe air. As they grow, they start developing lung-related diseases, suffer acute damage as pollutants accumulate in the lungs—asthma, allergies, bronchitis, pneumonia,  lung damage, reduced lung capacity.

“As more studies keep coming in from around the world, we are realising the sheer scale of the damage done to the country,” she says.

Alongside this, the tiny particles (PM2.5) enter the bloodstream and cross into all major organs of the body causing damage that is long-term and irreversible.

“As mothers learning of these health impacts and seeing that India has higher rates than the world in almost all of them, it motivates us not only when and if our children are sick, but also to worry about their future health,” Kndhari tells us, adding that the analogy of air pollution to cigarettes is particularly poignant when in some cities it is estimated that children breathe in the equivalent of smoking a pack of cigarettes a day when the smog sets in.

The movement is growing and warrior moms work in four steps:

Build capacity and commitment of stakeholders to engage with social, economic and environmental impacts of air pollution and climate change

Hyper-local, regional, narratives and collaborative campaigns on the health impacts of air pollution

During the lockdown months, Subramani has experienced what clean air every day can feel like and wants to see that as a permanent change. She is a documentary filmmaker and teacher, whose films have always focused on our intrinsic links with our environment and as a teacher, she speaks with her students about environmental issues.

Air pollution has always been an issue for her as she has grown up being concerned about the environment. Developing asthma as an adult got her thinking about air pollution more and more apart from chlorofluorocarbons (CFCs), which were the discussion points back then.

It was during Anil Agarwal’s campaign that Subramani got to know more about the effects of leaded fuel and vehicular pollution. “I moved to Delhi to study and it really hit me and since my student days I have been passionate about fighting it,” she shares.

When the pandemic first hit India and the country went under lockdown on March 24, 2020, the pleasant chirping sound of birds replaced the loud unpleasant honking of vehicles, air quality improved and sewage and industrial effluents in rivers decreased.

“During the lockdown, the difference in air quality was evident. There was no need to see  AQI or read a report. You could see it, smell it and breathe it. It was clear that the environment was doing way better without congested road traffic, among other reasons,” says Subramani.

She adds, “It was during this time I became a part of Warrior Moms as I felt it was more important than ever to join forces and talk about air pollution and how it affects us.”

With easy access to social media platforms nowadays, information spreads like a rumour. People consume all kinds of news and also fall prey to false knowledge. About the climate crisis, Subramani thinks that the awareness is very low and fake information persists and spreads. She tells us that with the Warrior Moms, every day is a learning experience and she has learnt to be less judgemental of people's choices. She feels empowered to be part of a group that actually believes in changing children’s future.

Being a year old, Warrior Moms is taking a step forward each day with an aim to generate awareness and work towards policy change. “We have already put out a list of complaint numbers and even among our small group, we have started making some inroads in this area,” she says.

Subramani is quite determined and now that the warrior moms have come together, she is stern with keeping her promise for fighting climate change. “We'll keep raising our voices, questioning our leader. Whatever happens or not, none of our children will grow up thinking that their mothers did nothing,” she tells us.

How do we pick the right fight for children's future?

Subramani says that there’s no one fight, there are many. “Climate change encompasses every battle against deforestation, fossil fuels, badly planned urban infrastructure and non-compliance with laws,” she explains, adding that so far as a society we have been guilted into thinking that individual action was missing but now we realise that the tide of inaction and complete apathy from Government and corporates must be addressed, must be fought against.

She thinks that there is still a false equivalence that a growing economy cannot care about the environment and the old trope about development versus environment must be demolished.