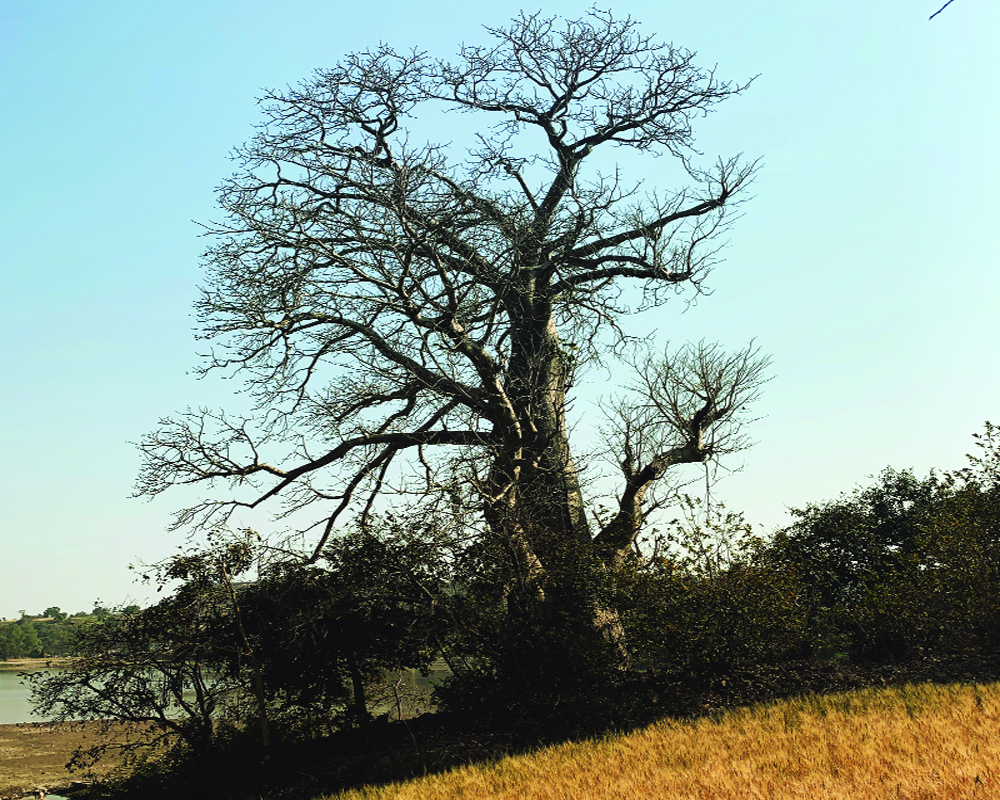 Mandu's geographical location is what made it such an important city. It prospered greatly under the Sultans of Malwa for nearly 200 years, writes Smita Tripathi

Amar prem ki nagari mein aapka swagat hai (welcome to the city of eternal love), a green-coloured board greets us as we enter Mandu, a small town 100 km west of Indore in Madhya Pradesh.

Myths, legends and Mandu seem to be made for each other. As you drive through lush green fields dotted with palaces and pavilions it is easy to lose yourself in the town’s stories of romance, courage and betrayal.

The most fascinating of all tales is the royal love story of Baz Bahadur, the last sultan of Malwa (1555-1562) and his beautiful consort Roopmati. In these parts, Baz Bahadur and Roopmati are no less than Romeo-Juliet, Heer-Ranjha or Laila-Majnu. Legend has it that once when Baz Bahadur was on a hunting trip, he saw a beautiful woman singing. He was so smitten by her beauty and melodious voice that he asked her to accompany him to his capital, Mandu. Roopmati agreed but had only one condition, she needed to set eyes on her beloved river Narmada every day. Thus, two canopies were built on top of a watch tower within 48 hours (if our guide is to be believed) so that Roopmati could see the river Narmada, 23 km away, come rain or shine.

Unfortunately, for the lovers, their romance was short lived. In 1562, Mughal emperor Akbar decided to invade Mandu and sent his general Adam Khan to capture Mandu. Baz Bahadur’s small army was no match for the great Mughal army. Mandu fell easily and Baz Bahadur escaped to Mewar. Adam Khan who had heard of Roopmati’s beauty requested to meet her. Sensing her fate, she poisoned herself and avoided capture but not before she wrote the following poem:

(My heart is sad seeing the sunrise in Mandu since Baz Bahadur has run away. The days of meeting my lover are over. It’s difficult for me to live now and I have no more work to do here).

History or legend? The love story lives on giving rise to poetry and folklore.

As I climb up Rani Roopmati’s pavilion, I imagine her standing under one of the canopies gazing at her beloved Narmada on the one side and at the Baz Bahadur palace on the other. Rani Roopmati’s pavilion which is on top of a hill was originally a watch tower. Besides the two canopies, Baz Bahadur built a water reservoir (Rewa Kund) so that Narmada water could be provided to Roopmati. The water was supplied in the whole building through an aqueduct.

There is a clear view of Baz Bahadur’s palace from Roopmati’s Pavillion. The palace is a medley of Rajasthani and Islamic styles of architecture. While strolling through the long corridors, arched entrances and domed pavilions I could sense the echoes of a glorious past.

It was to acquaint the visitors to this  historic past of Mandu — as also art, culture and heritage  — that Madhya Pradesh Tourism Board recently organised a two-day festival. One that I was apart of.

The first written inscription about Mandu is from the sixth century. But over the years, it changed hands several times. The Parmar rulers moved their capital from Dhar to Mandu in 1261, seemingly to take advantage of its strategic location on top of a plateau. The weakening of the Parmar rule and the attacks from Delhi intensified in the last years of the thirteenth century and in 1305, Alauddin Khilji captured Malwa. Another hundred years later, when Delhi was being ruled by Mohamed Shah Tughlaq, his governor Dilawar Khan Gori and his son Hoshang Shah ruled Mandu for several years and renamed it Shadiabad or the City of Joy.

It was they who turned the town into an architectural marvel by building iconic structures like the imposing Jami Masjid, modelled after the Umayyad Mosque in Damascus (Syria). Considered one of the finest and largest models of Afghan architecture in India, the red sandstone mosque has a sprawling courtyard enclosed by huge colonnades with perfectly symmetrical archways, pillars, bays and domes. The variety of domes are not meant only for ornamental purposes but ensured that the Imam’s voice could be heard during prayers all across the large mosque.

Jami Masjid is no longer an active mosque but in its heydays it could accommodate over 5000 people.

The tomb of Jami Masjid’s creator, Hoshang Shah, lies next door to it. Considered the first marble mausoleum, local folklore claims that Shahjahan was inspired by this tomb while constructing the Taj Mahal.

Whether that’s true or not, Hoshang Shah’s tomb built entirely in white marble is a beautiful structure with lattice-work, arched openings, domes and jalis giving it an elegant look.

One of the most striking structures in Mandu is the Jahaz Mahal built by Sultan Ghiyasuddin Khalji, supposedly to house his harem of 15,000 women. It is believed that Mughal Emperor Jehangir, who visited Mandu in 1617 and spent nearly seven months there, writing extensively about Mandu in his memoirs Jehangirnama called the palace Jahaz Mahal because built between two lakes — Munja and Kapur — its shadow looks like a ship. The beautiful palace with its gorgeous halls, cenotaphs, and striking pools is an architectural wonder.

The Jahaz Mahal is part of a larger compound that includes the very interesting Hindola Mahal, named thus because its sloping outer walls give the impression that the palace is swaying. As per our guide, the structure is built without a foundation and to ensure that it remained standing for centuries it was built at a 77 degree angle. During the monsoons swings were hung in the main hall for the queens to sway. Hindola Mahal has an elegant façade and beautiful symmetrical arches.

Because Mandu changed rulers so many times various structures were built, destroyed and rebuilt. It has over 3,000 structures from the 12th to the 16th century in a 26 sq km area. You cannot walk more than a 100 feet without spotting a beautiful monument, that tells its own story adding to the agelessness of the place.

It was Mandu’s geographical location which made it such an important city. It prospered greatly under the Sultans of Malwa for nearly 200 years. At its peak, Mandu had a population of over 9 lakh people. The small town today has a population of just 15,000. Built primarily as a fort, multiple ancient gates herald you every few metres, transporting you to a bygone era.

The Baobab Tree: From Madgascar to Mandu

If the numerous monuments in Mandu will take your breath away, the presence of several baobab trees, native to Madagascar and mainland Africa, will leave you wondering. These massive, towering trees bereft of leaves and with bulbous trunks dot the Mandu landscape leaving one bewildered. Where did they come from? There seems to be no satisfactory answer.

My guide says it was probably gifted by a traveller from those regions in the mid-15th century but there doesn’t seem to be a record of the same. While the presence of the trees surprises tourists like me, for the locals they have always been there. The baobab tree’s fruit is sold in the local market as ‘Mandu ki imly’. Break open the elongated fruit and you find a cluster of white-coated seeds. The texture is powdery and not fiberous like imly but it is tangy.

As I leave Mandu, I imagine it in all its glory as it lives on in its palaces and pavilions, its ballads and legends and I take a bit of its charm and romance back home with me.

How to get there

Mandu is located about a 100 km from Indore and the only way to get there is by road.

How much time do you need

You can cover Mandu’s main sights including the Jahaz Mahal, Hindola Mahal, Roopmati Pavilion, Baz Bahadur’s Palace and Jami Masjid in a day trip from Indore, if you are prepared to walk quite a bit. If you wish to slow down the pace and explore some of the lesser known monuments, then you can spend two days.

There are a few hotels in Mandu and most are fairly basic. The best option is the MPTDC Hotel — Malwa Retreat located next to one of Mandu’s Lakes.

The peak season in Mandu is the monsoon, when there is lush greenery all around. Besides that the weather is pleasant in the winter months from November-February.

How to get around

Mandu doesn’t have autos or cycle rickshaws as of now and so to get around you need to have your own vehicle or the hotel can organise it for you.

The light and sound show at Hindola Mahal is a must watch. The half an hour show provides a good overview of Mandu’s history and legends.

Network is a major issue but if the plan is to be cut-off from your daily life and enjoy Mandu’s serenity then it works. There are a couple of ATMs in the main market. But digital payments are accepted by most. Hotels accept credit cards.