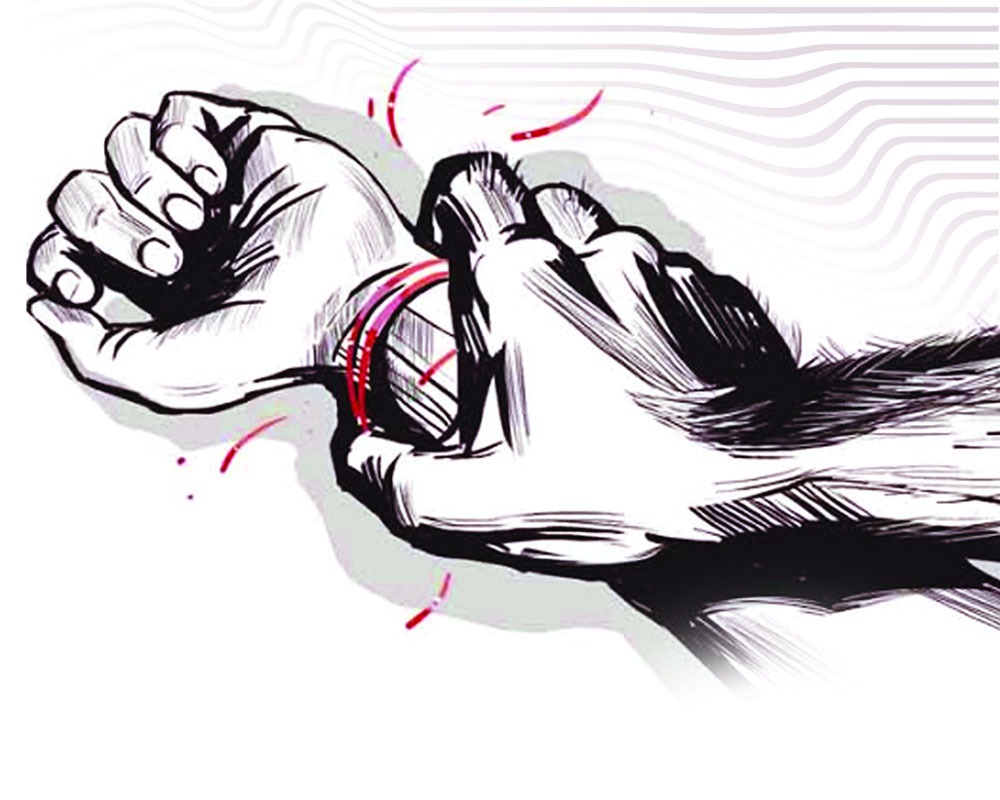 Rape of minor by minors is a clarion call to look within, to wake up and give voice to the calls for help by the 10-year-old that went unheard, says MUSBA HASHMI

On a usual busy morning of May 24, a 10-year-old girl left her house to play with friends, only to return with a trauma that will continue to haunt her for many years to come. The incident is of Rewari, Haryana, where a group of about seven boys, all minors except for one who is 18, raped the girl in a school building. This was not all. The accused went a step ahead and filmed the act. The video went viral in no time.

It was not until a villager informed the girl’s parents about the video that the family came to know about the horrific incident. One can only imagine what trauma the little one must have suffered that made her take to silence.

While rape is not something we haven’t heard of before, the fact that boys as young as 12 don’t shy away from committing such acts is what is both shocking and unfortunate.

What made these young ones take to such heinous crimes? There can be no one answer to this. But it gives us a reality check of the society we live in and the world we will be leaving behind for the generations to come.

“The young ones are the most vulnerable of all. We don’t know what exactly might have happened that led to such a crime, but we can anticipate that it was because of the company those boys shared. The 18-year-old was indeed aware of what he was doing, and he might have lured other boys into the crime,” Pulkit Sharma, a clinical psychologist, says.

The only way out here is to have a close eye on your child’s friends. The parents must take charge of the company that their child shares. Keep a look at what your child does when alone. The need is such that even children as young as ten are having access to mobile phones and WiFi; this increases the risk of internet abuse.

“Parents must monitor the watch and search history when their child uses the phone. There are times when a child ends up watching inappropriate videos or ads, not because he searched for it, but because it appeared as a suggestion. It is all toxic and addictive. Hence, try to put your phone in kid-safe mode before giving it to your child; this will eliminate any chances of incorrect use of the Internet,” Sharma opines.

He adds that many children grow up with difficult emotions such as loneliness, hatred, aggression and envy because of our current social structures; this makes them hardened and aggressive and predisposes them to such criminal behaviours.

Pooja Sareen, advocate, women and child rights activist, says that parents' biggest problem is not opening up with their children. “The biggest problem in India is that the parents do not open up with children on a very critical subject such as sex, sexual needs and sexual restrictions, what should be and should not be done. Most of them watch web series with their children that are often full of abusive hurls and sexual and love-making scenes. While some skip them, others don’t think that the child is juvenile, or a teenager. It is disheartening to hear some parents say “dekhne do, ladka hai, seekhne do, isi ne sambhalna hai”.  We read too many articles on child rapes, rape on children by children or juveniles and we have read about ‘Bois locker room’ too; this is one way to expose the young minds towards such a sensitive topic, and due to the lack of proper guidance, they fail to understand what is right and wrong,” Sareen says.

The lack of dialogue on sexual crimes at the school and community level is the reason behind the increasing cases. The more educated children are about such acts and crimes, the instances of such cases will reduce. “The Government should work towards the prevention of such crimes because the general trend is to respond to a crisis and not prevent it. Also, children don’t fall under the vote bank, and the Government thinks that work for children is more charity-driven; this shows in the budget as well, where only 0.6 per cent is spent on child protection. They often see investment and result as two parallels, but the need is to merge the two and work on things. You can’t expect results if you don’t invest. The investment here is to be done in the prevention of such crimes,” Urmi Chudgar, Lawyer, HAQ: Centre for Child Rights, tells you.

Experts emphasise that educating children and creating awareness is the only way to reduce these crimes. “A lot of moral preaching is the need of the hour. We need to educate children about consent and rape punishments. Sadly, the school’s curriculum covers sex education as a mere topic. But does it cover STI, STDs, AIDS, rape, pregnancy after rape, the complications that rape victims go through and the psychological treatments they require? The answer is no. All these topics should be covered with the help of examples and suggestive role plays,” Sareen opines.

A mirror to society

Sareen adds that rape by a 10-year-old or a 6-year-old, is not just an example of a mentally sick and frustrated child, but it also holds a mirror to the parenting, teaching from school, friends and highlights the dearth of efforts made on him. “Such news makes headlines every other day. We read them, think about them and often forget. The question is: are the boys only to be blamed? And not their parents who fail to teach them the difference between right and wrong,” Sareen asks.

Do we need stricter laws?

While many people demand that there should be stern laws for such heinous crimes, Chudgar feels that the current laws are sufficient. “Amending the laws and increasing the punishment is not the way forward. When the Nirbhaya Case happened, there was a change that 16-18 years olds also could be tried as adults in case of heinous crimes; this in itself is a deviation in the principle of the Juvenile Justice (JJ) Act. Also, because India is a signatory to the United Nations Convention on the Rights of the Child (UNCRC) bringing in such changes in the law that are against the benefit of the child are not in line with the principle of JJ Act and UNCRC. Hence, the need is for proper implementation of the existing laws and not thinking of newer ones. The POCSO and Juvenile Justice Act are strong enough,” she emphasises.

She adds that it is not because of the loopholes in the law that juveniles are taking to such crimes thinking they will get away with it; instead, it is because they commit a crime without thinking of the consequences.

“A 10 or 12-year-old, when committing a crime, won’t think of the consequences. A child cannot comprehend a crime at such an age and calculate the actions. As most people say, it is nothing but a result of criminal mentality, and it is because they are not educated enough about right and wrong. They see what is happening in their family or area and replicate it. So, parents have to work with their children from the beginning. And especially when a crime has been committed, and they are in the shelter homes, there has to be intensive counselling to make them realise and understand that what they have done will have consequences on them as well. They should not think that they are juveniles and will get away,” Chudgar tells you.

While these cases are fortunate enough to make headlines and reach public notice, hundreds of cases go unnoticed and even unreported. The reason being public shame and harassment that follows. Some people even doubt the law and think they will not get justice.

“Some people think that reaching out to the court and attending the hearings will further traumatise the survivor. But in such cases, the law has several provisions for the survivor. There’s a separate room for the vulnerable survivors. There’s no lawyer or the culprit in the room. The survivor is accompanied by a support system and can put her point forward. There are no direct questions thrown on these young survivors. Not only this, but the law even allows them to avoid multiple visits to the court. If they want, the survivor can give out their statement in one go. Also, when they need to be questioned, police don’t go in uniform,” Chudgar explains.

It is nothing but a result of a lack of knowledge and awareness related to law. It’s high time we should start creating awareness instead of just talking about it. “In the rural areas, the Asha workers can be trained and educated about the law, and they can further pass on the knowledge to the people. The Government can organise short informative sessions on such topics. Further, hoarding and posters can be put in public places. It is said that you tend to remember things that you have read for a long time. Posters will prove to be helpful as they will initiate that dialogue and also educate people about such sensitive topics,” Chudgar opines.

Need to streamline tech use

Both Sareen and Chudgar agree with Sharma that the unrestricted use of technology is also leading to such crimes. “Giving them gadgets is a key to easy access to sex. Especially during the lockdown, when both classes and tuitions have gone online, how fair is it to not mentor them on what’s essentially a part of them. I beseech to all parents, hold hands of your children, educate them on sex. Educate them on repercussions of rape, talk to them as friends, they need you,” Sareen says.

And the even more horrifying trend that is, of course, a result of technology — shooting videos and posting them online, is becoming infamous. Chudgar says that it is part and parcel of technology. “It is a strange world that we live in. Not only children but even adults have the habit of recording whatever is happening near them; this is both good and bad. However, being in possession of child pornographic material is a crime in itself; it is again because of the lack of awareness that people don’t shy away from recording and circulating such crimes. The need is to educate people about the wise use of technology because there’s not much we can do about this infamous trend,” she suggests.