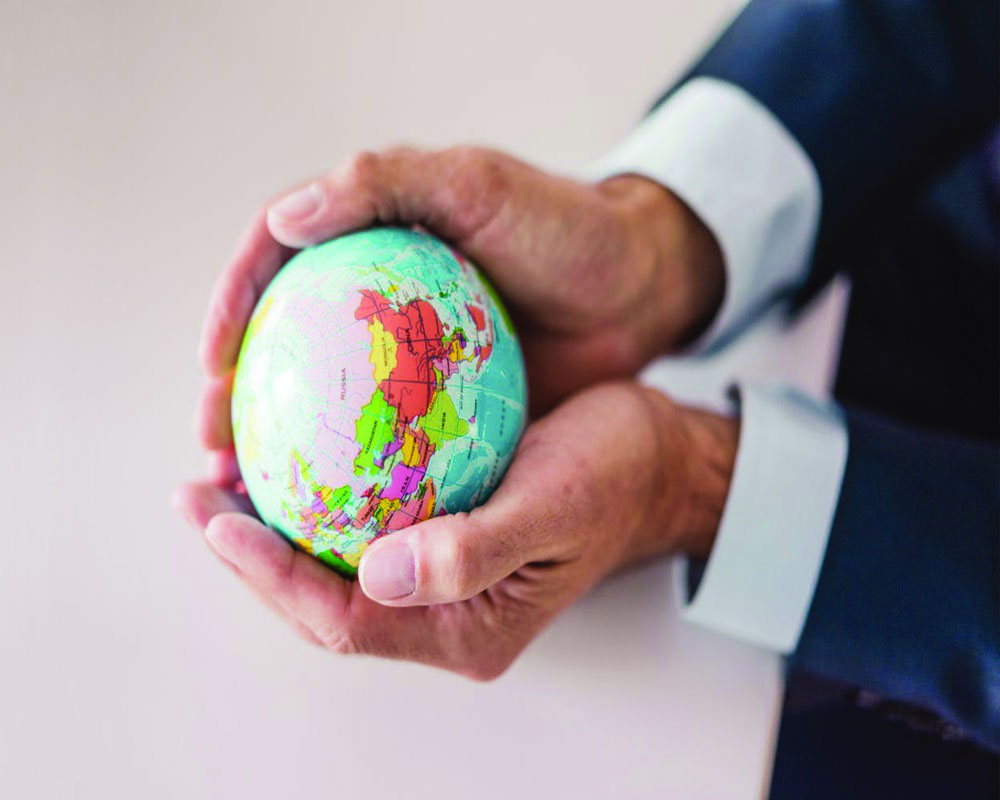 The 2019 Global Wealth Databook from Credit Suisse reports that 73 percent of Indians have a net worth of less than $10,000 (compared to just 19 percent in China), while 2.3 percent have a net worth of over $1 million. India ranks fourth in the world in ultra-high-net-worth individuals (4,593), making us one of the fastest-growing yet unequal nations.

Private sector corporates often do not see addressing developmental inequities as their problem. Access to food, water, healthcare, and education is commonly understood as ‘poor people’s problems that the government and social sector organisations must solve. No doubt that the poor are the first to be hit, that too very hard, as we saw in a mass exodus of the migrant workers during the first wave of the pandemic. The middle class and above believe that they can access basic necessities by private means and from the private sector. The second wave of the pandemic showed us how false that sense of security is! With the relatively well-off scrambling for medical care, medicines, oxygen, and ventilators, it was apparent that none of us would be spared from the ill effects of our developmental shortcomings.

Impact Champions: The flagbearers of change

If we were to survive together, the corporate sector organisations must enact social consciousness. This mindset understands and accepts the interconnectedness of the economic, social, and natural worlds. Socially conscious organisations do not come into existence without socially-conscious managers. We see such managers as ‘Impact Champions’ having the intent and capabilities to help their organisations positively impact the economy and society, and the environment.

Enamored by the glitz of the corporate careers in the liberalized Indian economy, MBA aspirants in the 1990s readily bought into the mantra of ‘profit maximisation. But many Gen Z and Millennial MBA aspirants are a little more skeptical about whether that is the best way forward, as it has become apparent that their generation would bear the consequences of the social and environmental damage left by the unbridled pursuit of profits. Many of them harbor pro-social inclinations during their student days; however, they are unsure how to take it forward once they start a corporate career. In the ‘big, bad world of corporates’, beating competition and exceeding performance expectations are the basis for career advancement. Hence, they feel that there is little room for social ideals.

Time has never been more right for aspiring Impact Champions in the corporate sector to get into action. The UN has been driving Sustainable Development Goals 2030 (SDGs) to tackle the development challenges and climate change. SDGs urge the private sector to collaborate with the civic society and governments, to which influential corporates world over have responded positively. In the global business circles, ‘Triple Bottom Line,’ with its focus on 3Ps — People, Planet and Profit, is widely discussed as a replacement for the traditional ‘bottomline,’ focusing singularly on ‘profits.’ With avid support from the likes of Klaus Schwab (Founder and Executive Chairman of the World Economic Forum) and Jack Welch (ex-CEO, GE), ‘shareholder capitalism’ has begun to make way for ‘stakeholder capitalism,’ which gives equal priority to the employees, customers, suppliers, and the community.

Indian corporates are slowly beginning to catch up with this global trend. However, they are in dire need of managers who can champion this transition.

How to be an Impact Champion?

Self-appoint yourself as an ‘Impact Champion’: Most corporate jobs would demand you to mind only the impact on profit, not people or the planet. To be an impact champion, you have to self-appoint yourself as one and be sure that you do not leave your social consciousness at home while coming to work. When you operate with a ‘corporate mindset’ in a regular day’s work, you would accept and get on with decisions that look perfectly sensible and acceptable from the corporate and legal standpoints. It takes social consciousness to recognize when stakeholders or environmental interests are being compromised among what looks like business as usual. An impact champion not only recognises issues but also takes personal responsibility for action. New managers aspiring to impact champions may be unsure how to navigate organisational processes and culture in enacting social consciousness. They can find support in like-minded managers and mentors at the Impact Champions Forum, a seedbed for individuals who intend to transform organisations into socially conscious ones at CESI, Indian Institute of Management Kozhikode.

P P Sukumaran (ex-HR Head, Murugappa group) had to retrench 200 plant workers post-TQM implementation. A perfectly legal decision, arrived at in consultation with the Union, still left him worried about the ‘social debris’ that this decision would leave — what were the chances that 200 middle-workers in a northern Kerala village find alternate jobs; even with the severance money will their families have financial security in a social setting where alcoholism was rampant. P P Sukumaran was determined to do something about it. However, he was not required either by law or by his organisational mandate to address this.

Get partners: You have to do it yourself, but you cannot do it alone. Irrespective of where you are in the organisational hierarchy, you would need partners. Partners are people inside (sometimes even outside) of the organisation committed to addressing societal or environmental problems that you seek to solve through organisational means. In addition to moral and emotional support (which you will need aplenty), partners bring in legitimacy to the cause (especially if they are higher in the hierarchy or hold formal or informal positions of influence), knowledge and skills resources to develop a deeper understanding of the issue from multiple perspectives as well as potential solutions, access to networks and organisational resources, and political backing to elicit favorable decisions.

In the example, P P Sukumaran engaged in active discussions with his contacts within and outside his organisation. One of them directed him to Dr.Nalini Gangadharan, Livelihood Advancement Business School (LABS) of Dr. Reddy’s Foundation. LABS had a skilling model that Sukumaran found appropriate for retraining their redundant workers to suitably place them in alternate jobs or start their ventures. The model was later replicated in Chennai in partnership with other corporates for skilling at-risk urban youth, creating a corporate consortium model for financing such initiatives.

Explore Corporate Social Responsibility (CSR): Most corporates support CSR activities which are perhaps the easiest way to initiate action. If your company already has CSR departments and programs, you can get involved in that. If current CSR activities do not address pressing social issues close to your heart, you can always pioneer new activities.  Given that CSR has been mandated by law since 2013 and many companies are struggling to identify worthwhile projects, you may not find it too hard to get buy-in for your ideas.

You can implement them through any of these four different formats:(a) as a foundation, otherwise known as a Section 8 company(e.g., Infosys Foundation); (b) in partnership with NGOs, trusts, or registered societies with a proven track record (e.g., ITC and Pratham working together in the Reach India Plus initiative; (c) in partnership with other companies (e.g., Mphasis and Uber launched Uber Assist and Uber Access that retro-fitted vehicles to help Persons with Disabilities as their joint CSR initiative); and (d) following an employee volunteer model (e.g., Calpine Technologies runs Engage — their CSR program that builds leadership skills in school children through football with the help of employee volunteers).

Pursue Corporate Social Innovation (CSI): Business models can generate societal benefits by changing their perspective (e.g., including marginalized groups in the supply chain, new products for the old and disabled). As an impact champion, you can tweak the current models in innovative ways that generate social and/or environmental impact while serving corporate interests.

For example, ITC launched ‘e-Choupal,’ one of the most extensive Internet-based interventions in rural India, enhancing earnings and transforming the livelihoods of over 4 million farmers in over 35000 villages through 6100 kiosks across ten states. e-Choupal deploys information technology to virtually cluster all the value chain participants and vertically integrate various actors in the agriculture supply chain. Village internet kiosks set up to access information are managed by farmers, who get information on the weather, market prices,scientific farm practices, and risk management in their mother tongue. They can use the kiosks to purchase farm inputs and get them at their doorstep. Real-time information has made it possible for farmers to make better decisions aligned with market demand, significantly reducing transaction costs.

Track ‘Impact’: Although the amount of money and energy invested in CSR and Corporate Social Innovation is going up each year, ensuring that they deliver actual social impact somehow has taken a backseat. Even after introducing mandatory reporting of impact, most companies focus on the inputs (e.g., amounts spent) or outputs (e.g., the number of rooms built in a rural hospital, pieces of equipment they bought). Some try to pass on the number of beneficiaries that they have been able to reach as impact. But this is not the same as tracking if and how the initiatives have created tangible differences in the lives of the beneficiaries. Without a robust impact tracking mechanism, attempts to make an impact may not be as effective as you would have imagined.

We conducted an impact assessment for the Vidhyadhan Scholarship program, run by the Sarojini Damodaran Foundation (SDF). Since 1995, SDF Foundation has provided scholarships to academically bright children, primarily from Below Poverty Line (BPL) families who completed high school (class 10 in India) to pursue higher education. Thus far, the program has provided 13,500 scholarships, with over 10,000 beneficiaries currently pursuing their higher studies across ten states. The basic premise of any scholarship program is that the monetary support would enable them to build human capital in academic qualifications, which will help them find employment and thus lift them out of poverty. We found that this undeniably was the case for those who were able to find jobs. However, we also found that finding a job and future career progression depended on social capital in terms of networks. It was hard for those who were low on social capital to get jobs. This led to the realisation that in addition to monetary support, the students from disadvantaged backgrounds also would need support to build their social capital through mentoring and networking.

The starting point of being an impact champion who sets the organisation on a socially oriented path is your own social consciousness and willingness to drive transformative innovations. If you ever feel shaken by the scale of what you have to achieve, take a cue from a climber scaling a peak: You need to focus on where to place your next step. Then, step by step, you would reach there.

The writers have recently published Being an Impact Champion: Enacting Corporate Social Consciousness, with SAGE Publications India, under the SAGE IIM-Kozhikode Series for New Managers