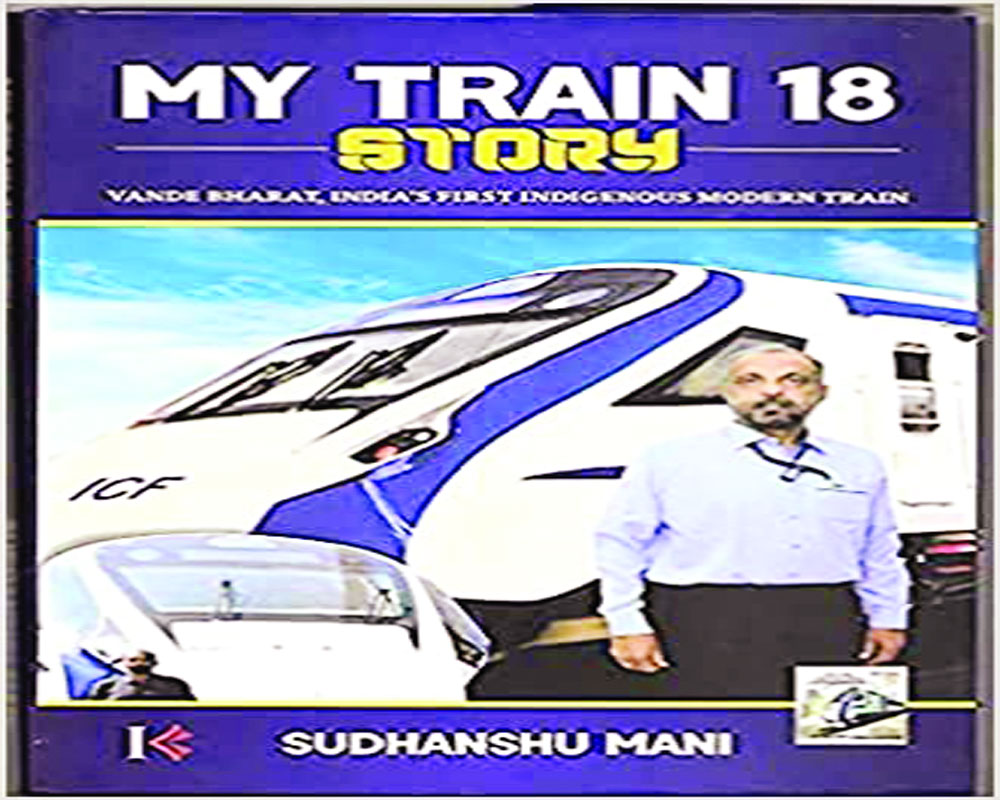 My Train 18 Story brings out the stifling bureaucracy of Indian Railways. Most important, it talks about how honest & driven men can challenge babudom & bring about change, writes Deepak Jha

Known as the ‘Train Man of India’, Sudhanshu Mani, the author of My Train-18 Story, led the project to design and manufacture the first ever semi-high speed modern train of India, the Train 18 — now in service as Vande Bharat express within the Indian Railways network system.

Sixth publication by this IRSME Railway Officer, the book chronicles his last 29 months as a government servant heading the famous Integral Coach Factory (ICF) of Indian Railways (IR) at Chennai.

On the face of it, the book appears to be a narrative about how a train was conceived and built. But it is much more than that. The project itself came to be known as one of the most ambitious when it was projected as a symbol of aspirational India in 2018 — now dubbed as ‘Atma Nirbhar Bharat’, a term coined by Prime Minister Narendra Modi.

The book describes the journey of a man, and above all his team, which committed itself to creating something which was considered unachievable. The book is about the leadership of an individual to bring transformational changes in an organisation. It is about the creative power of Indian engineers, which if channelised properly, can work wonders.

The author has included technical details, but with a stress on his mantras on dealing with mulitple complexities such as Public Procurement Systems, Design of rolling Stock, Manufacturing techniques and Train Simulations.

The technical details are written in a manner that can be easily comprehended by an average reader, making it insightful and a good read. For example, the author explains in the beginning what a train set is. While a conventional train is made up of coaches and a locomotive (an engine in common parlance), at one end or either end, a modern train set is a train of permanently-coupled coaches such that all the equipment is mounted under the train chassis itself and there are no locomotives. Such a train has many advantages — such as, faster acceleration, reduction in travel time, better comfort and aesthetics.

The author shares the way the team went about determining their technical capability truthfully and then challenging themselves to strive for something that was perceived to be beyond them. Their practical approach is what made it achievable. Mani describes how they made a matrix in the beginning of the project, listing three categories: 1) area where ICF was there or almost there, 2) areas in which ICF could be there with some extra effort and or judicious selection of manufacturing vendors, including import, but strictly as per specifications and drawings developed by ICF and 3) areas in which we could be there only with handholding by some superior professionals.

Some of the anecdotes mentioned by Mani in his book are funny, some are scathing but they all are befitting the narrative. In one of these, while describing his way to deal with people who do not care for action and delivery but sit smugly with inaction, the author says that they reminded him of jalebis because jalebi-making is synonymous with unnecessary nitpicking to stall any work. Whenever he came across any such instance, he would make his own judgement from file notings, invite the officers delaying the case to his room, order jalebis and offer it to them, saying that they had really earned this feast.

In another one, he talks about a government officer and the quintessential his briefcase. An officer never carries his briefcase, his peon does. Should he be required to carry it himself someday, he makes a funny spectacle as he thinks carrying a briefcase yourself is infra dig. This why the author says he started using a shoulder bag early in his career. His insider’s description of the huge Rail Shivir, a jamboree for ideation organised by the Railway Ministry in Delhi is uproariously comical and brings out what nobody in the media ever was able to.

The author explains how this was an effort not merely by ICF but the associated industry as well; these companies saw in this project the pride of nation-building and not a business opportunity alone.

The book brings out the stifling bureaucracy of Indian Railways. But, it is not only about this malady which plagues India but also about how bold, honest and driven men can challenge the babudom and strive to put an end to it to bring about the much needed change.

Mani’s book is a must read to understand why India has become a big consumer of technology that the world is eyeing to place its products in, mainly because of the size of the market and purchasing power, but when it comes to being a producer of technology, it does not have much to show for, lagging behind even some small developed countries. You will find lot of answers to the questions which bug us all.

Interspersed with Shakespearean and Ghalibian quotes, perhaps overdone, it is also a delight for those who seek to define managerial situations and solutions through poetic expressions.

A must read for all age-groups who have the fire in their belly to try something novel and arduous. It is an exhilarating story told in an eminently readable manner. The book is the sixth in his series of publications. Mani’s earlier works — Trains Unchained; A Skein of Trains; Greening of a Factory; Reinventing the Wheel, Art & Railways (co-authored with his colleague Lily Pandeya) — have been well received and highly acclaimed.