US & the Great South Asian Realignment

US & the Great South Asian Realignment 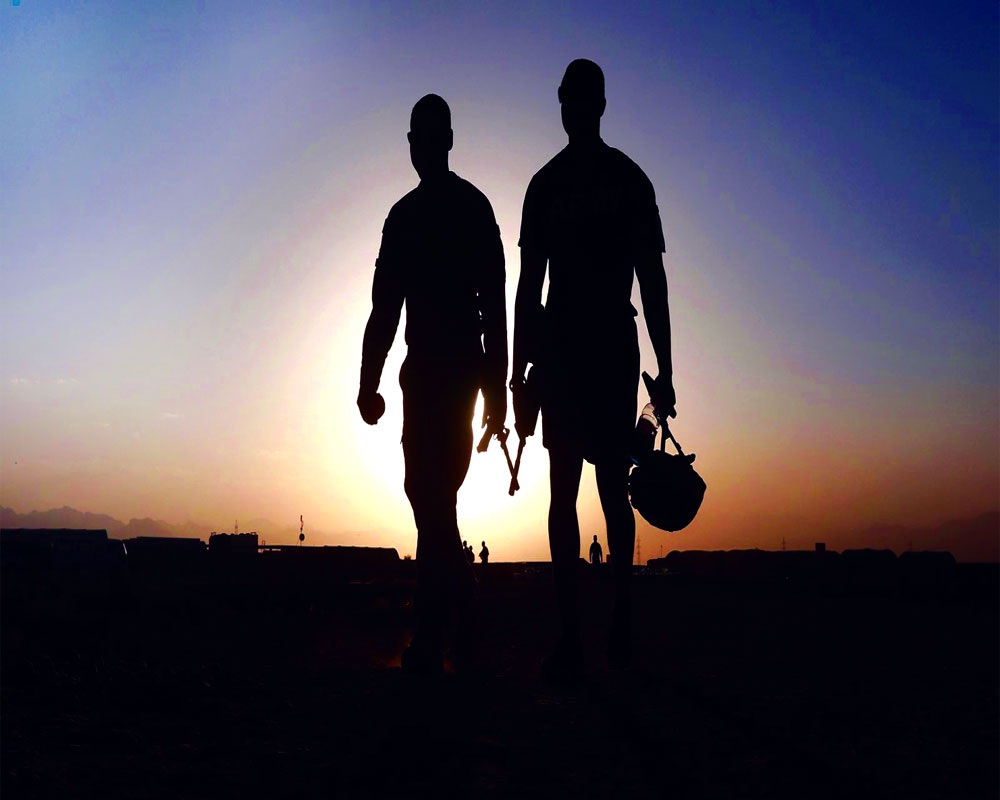 For the last two decades, the US’ India-Pakistan balancing was majorly driven by an equilibrium between two lenses through which Washington looked at South Asia — ‘the Afghanistan lens’ and ‘the China/Indo-Pacific lens’. With a gradual withering away of the Afghanistan lens, the US’ South Asia approach would enter a phase of realignment leaving Pakistan in a quest for ‘strategic relevance’ to the US, writes Chirayu Thakkar

President Biden’s first diplomatic outreach — America is Back — is laden with harsh domestic realities such as irreconcilable partisanship, stark ethnic differences, pandemic riven economy, and an unprecedented assault on the democratic process, all needing urgent attention that limits US’ international focus. The White House’s limited foreign policy bandwidth, at least in the first couple of years, means retracting the US from unwarranted and intractable commitments and focusing on significant challenges — addressing China’s rise, preventing drift of European allies, limiting nuclear proliferation in the Middle East, and fostering healthy globalisation and free trade that benefits the US.

A productive American foreign policy geared up to wind down its presence in Afghanistan and poised to increase its focus on China disrupts its longstanding balance between India and Pakistan, where both rivals have enjoyed equal strategic relevance to the US if not equal benefits. For the last two decades, the US’ India-Pakistan balancing was majorly driven by an equilibrium between two lenses through which Washington observed South Asia — ‘the Afghanistan lens’ that necessitated relying on Pakistan for its support in getting out of the Afghan quagmire and ‘the China/Indo-Pacific lens’ that compelled investing in India as a strategic partner who can stand against Beijing. The equilibrium meant internecine parity to Pakistan while ensuring a steady flow of financial and military aid. With a gradual withering away of the Afghanistan lens, the US’ South Asia approach would enter a phase of realignment, leaving Pakistan in a quest for ‘strategic relevance’ to the US.

Such a realignment would prove a mixed bag for New Delhi. On the one hand, it would limit impunity enjoyed by Pakistan with the US for its state-sponsored terrorism against India by encashing its Afghanistan card. On the other, Pakistan’s desperate attempt to remain strategically relevant can include nefarious designs that can harm Indian interest and threaten regional security. As the American appetite to get out of Afghanistan grows, it is not only imperative for New Delhi to remain vigilant about its interest in Afghanistan but also keep a tab on the strategic desires of its next-door neighbour.

Strategic relevance is used in the context of small states. Small states try to play a minor yet critical role in the strategy of big powers in exchange for their own security assurances and financial largesse.

Pakistan, by no means a small state, made strategic relevance to the US a cornerstone of its foreign policy since independence for nearly similar reasons. First, having the US by its side, Pakistan hoped to offset military disparity with a mighty neighbour and arch-rival India during the Cold War years. Second, it would ensure a continuous flow of civilian and military aid from the US. Third, it allowed the unelected Military Inc. of Pakistan to get away with its real power and authority, unlike military juntas of the Third World who face American censure.

Having understood the benefits, Pakistan became a member of SEATO in 1954. While the membership did not obtain security guarantees against Indian incursion similar to NATO Art. 5, it ensured US goodwill and considerable financial assistance. Pakistan continued to seize opportunities coming its way. For example, the late 1960s gave it a chance for yeoman service during the Sino-American détente. Pakistan was summoned to facilitate negotiations with Mao Zedong, which it happily delivered in the hope of American favours.

Nothing turned out to be more fortunate for Pakistan than the Soviet invasion of Afghanistan. That fortuitous event entrenched Pakistan in the US’ strategic calculus like never before. Pakistan had constant attention of the US as the escalation with the Taliban kept piling on the body count of American troops. However, it seems that the denouement of that dream is approaching, making Pakistan’s rulers in both Islamabad and Rawalpindi jittery.

Most recently, Pakistan’s National Security Advisor Moeed Yusuf has expressed a desire for a US-Pakistan ‘reset’ based on geoeconomics and not geopolitics. With an ostentatious candor, he says a ‘new Pakistan’ does not want the relationship to be viewed through lens A, B, or C. If Pakistan is really sincere about an economic security paradigm, it is a most-welcomed scenario for India. The market size disparity will settle the unabating chase for parity with India, which is at the root of many regional problems.

This can be a mere charm offensive by Moeed, an old DC warhorse who has spent over a decade shaping pro-Pakistan opinion and lobbying for his country through lucrative think-tank positions he perched. Or, it indicates buying time until Rawalpindi formulates a new strategy. The recent India-Pakistan ceasefire agreement feeds into this arithmetic of taking a step back.  For two reasons, the geoeconomics desire smacks of insincerity.

First, it does not square with Pakistan’s domestic realities. With soaring inflation, billions in circular debt, decreasing per capita purchasing power, incessant political wrangles, federal government’s policy command contested by the provincial, military, and baronial powers, lack of urban infrastructure and connectivity, and domestic security challenges, much leaves to be desired for Pakistan to enamor private US capital.

Second, a geoeconomics-oriented Pakistan has to give up on using terrorism as a state policy; there is no way tradesmen and terrorists can thrive together. However, any such changes would mean the military losing control over the Pakistani state, which it would never let happen. It also raises a paradox: Pakistan’s civil-military elite who have disproportionately benefited from one extraneous lens or another — most recently, Afghanistan — why wants to give that lens suddenly for a standalone relationship? Hence the reset pitch is indicative of both consternation and parallel churning that wants to recapture any potential loss of that status.

With its decision to test Shaheen-III missile that can carry nuclear weapons to Israel on Biden’s inauguration day, Rawalpindi has betrayed its desperation for relevance and attention. But what makes Pakistan so insecure about losing relevance? Apart from internecine parity and millions of dollars in aid, it is Pakistan’s elite that stands to lose the most. It is unimaginable for Pakistan’s civil-military rulers, some of whom are dual citizens having properties, businesses, and families in the US, to lose the heft. It is a personal loss too.

Further, being in the US’ good books grants complete impunity to the military leadership in domestic and international affairs. Just look at the countries that invited US incursions or wrath and their corresponding sins-Iraq for allegedly supporting Osama bin Laden and al-Qaeda, Iran for aspiring to possess nukes that can threaten Israel, Syria and Libya for dictatorships and abetting jihadists, Myanmar for military despotism, and North Korea for proliferation. But a country where all sins converge — the presence of Osama bin Laden, nuclear weapons that can reach Tel Aviv, sworn animus towards Israel, sheltering jihadists, military dictatorship, indirect control of the civilian government, human rights abuses, and proven proliferation to North Korea, Iran, and Libya — is immune from any American punitive actions because the US needs it to navigate and exit the largest quagmire it entered after Vietnam. Even the idea of losing this privilege can fret Pakistan’s generals more than anything else.

But will Afghanistan be pushed to oblivion? Is a post-Afghan world dawning in? Given the American involvement in Afghanistan today and the Taliban’s truculence, it seems that the US troops would never leave Kabul’s soil. Once, it did not appear to be true in the case of Vietnam too. Many had assumed that a small American presence in Vietnam was a fait accompli, and total disengagement was next to impossible. In a couple of years, they were proven wrong.

Moreover, mere troop presence does not mean high salience in American foreign policy. Some American 5,000 troops are still stationed in Iraq compared to around 2,500 in Afghanistan, but Afghanistan is a high-priority issue today. Even if a battalion remains hunkered down in Kabul, Afghanistan will not attract the same foreign policy focus forever. And Pakistan is aware that the expiry date is approaching.

Pakistan is now preparing to plug itself into any issue that can continue its present perks as a ‘strategically relevant’ country. Asad Majeed Khan, the Pakistani ambassador to the US, talking to a DC-based think-tank, said that “we also represent the Iranian interest here… and we have been doing that for the last 40 years.” As Iran supplants Afghanistan as the prime focal point in the days to come, Pakistan would want to encash that issue to its advantage.

Pakistan’s pursuit of strategically relevant access point would be oriented towards west and central Asia instead of eastwards. To its east lies two behemoths — India and China, both would ensure American attention towards Pakistan without the endearing ‘strategic relevance.’ India-US partnership has acquired a new strategic hue shedding the subcontinental shibboleth of a nuclear flashpoint. Pakistan has too often rehearsed nuclear brinkmanship with the US to blunt its utility. After the abrogation of Art. 370, Imran Khan’s entreaties of ‘nuclear shadow hovering over South Asia’ in the pages of New York Times fell on deaf ears.

Similarly, its inordinate proximity with ‘iron brother’ China that proved an asset during the Cold War is now a sure liability. It is folly even to imagine another Sino-American rapprochement, and hence, Pakistan’s China bet is a sunk cost for its American calculus. In fact, anything it needs to do is to salvage its image from sin by association.

This situation leaves Pakistan with three possible options. First, delay the Afghan peace process and buy as much time with the current situation as possible. Although US presence limits Pakistan’s ability to assert itself in Afghanistan, it can endure the short-term pain. Such instability hurts Indian interests as it hurts others. Second, it has already increased its overtures toward Tehran, even if it means upsetting Saudi Arabia and the UAE to an extent. Pakistan is emboldened by China’s leverage brought by Beijing’s promise to pour billions in an economy stifled by sanctions. Beyond beguiling its American counterparts through the Tehran card, cutting India to size in Persia would be its another goal. India’s camaraderie with Gulf monarchs comes at the partial cost of old warmth with Iran, but New Delhi should ensure its vital energy and security interests are not hurt. Finally, Pakistan has a notorious past of fomenting troubles through non-state actors when it is desperate. India would need to stay ahead with better intelligence and border surveillance to meet potential challenges.

Pakistan is facing a crisis moment of bulk expiries in the coming days — Afghanistan, China, and nuclear cards — while its desire to milk its strategic relevance continues. New Delhi needs to closely monitor the internal strategic churning in its neighbourhood and war-game its own responses to stay ahead in the game.