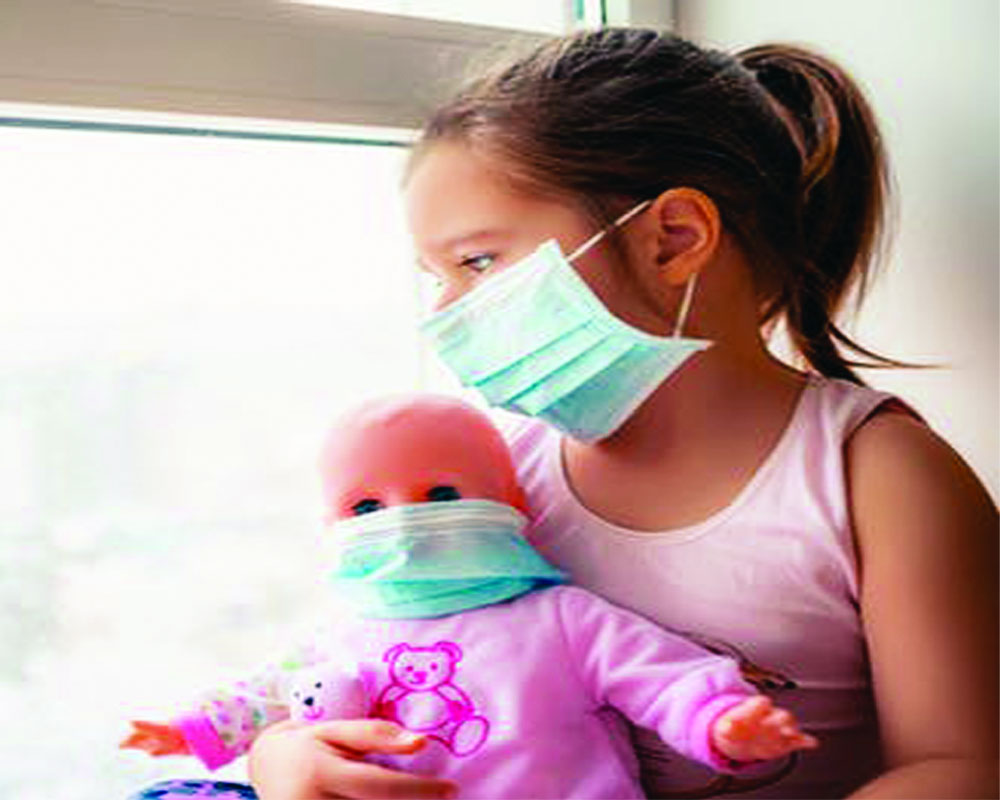 Alarm bells have reached a fever pitch with more and more COVID-19 cases being reported in the younger segment, with fatalities. MUSBA HASHMI talks to doctors and experts to see what can be done

The unexplained COVID related deaths in children less than one has rung alarm bells all around the globe. To make things even worse, a heart wrenching video of a woman from Brazil, who lost her toddler to COVID because of the late diagnosis is enough to give you a peek into how alarming the situation really is.

Hospitals full, ICU wards on waiting list and oxygen cylinders running off the shelves, the traumatic situation has left people in distress. Finding a bed in hospital has become a stroke of luck. There’s nothing else we could imagine with the nation witnessing not less than 2,00,000 cases a day in the second wave of COVID.

And in the middle of all this chaos, the devastating fact is more and more children are testing positive, as compared to last year, and with increased complications. This has been a cause of worry for parents, who took  a sigh of relief thinking that their young ones are immune to the virus. But, experts say this was never the case. Though the positivity rate was extremely low, that was mainly because of children being asymptomatic.

“This has been a wrong perception. Children were never immune. They were asymptomatic. However, their caseload was relatively low, it is hard to speculate why at the moment,” Dr Sisir Paul, Director and Head of Department of Pediatrics, Madhukar Rainbow Children's Hospital, Malviya Nagar, New Delhi, tells you.

With the studies still being at a nascent stage, doctors attribute the mutated strain as one of the main reasons of the high positivity rate in children. Not to mention complacency also has a role to play.

“There’s no denying that people have become complacent. However, we speculate that the mutated strain is the reason behind the increased positivity rate. We can’t say whether children were immune, but yes cases were relatively low. Last year, we were working with 50 per cent capacity, but now it is full,” Dr Praveen Khilnani, Director — Pediatric Critical Care, Senior Consultant Pediatric Critical Care & Pulmonology, Madhukar Rainbow Children's Hospital, Malviya Nagar, New Delhi, says.

The silver lining, however, is that the mortality rate in the young people is less than 10 per cent. And children, specifically, are experiencing not-so-severe symptoms. “Children are often experiencing fever, cough and cold, sore throat, body ache and, in some cases, faster breathing. The recovery rate, fortunately, is between eight and 10 days,” Khilnani tells you.

However, there is a varied picture now with this episode of the disease. The common symptoms have changed and children are now reporting gastrointestinal issues. “We have seen cases where some children are reporting diarrhoea and vomiting, with no fever or cold. The clinical picture has changed. Even children as young as one are symptomatic now. To know the exact reason, it will require a lot more detail, but on the face of it, yes mutations have taken place and can be the reason behind the increase in cases,” Paul explains.

He adds that the hospital hasn’t reported any casualties in children yet, but the situation around the globe is worse. “We have been fortunate enough to have seen moderate cases. Some required ICU, but ventilators were nowhere in the scenario. This gives a ray of hope. However, having said that the situation is grim. Events like elections, malls and theatres opening up and Kumbh Mela hold a possibility to become the reservoirs of the virus. Given such a hard situation, we can’t afford to put down our guards,” Paul says.

While many doctors doesn’t suggest masking up children below the age of five, what can’t be compromised at any cost is following all the other precautions. “Avoid outside contact. Don’t let your relatives visit you, more so if you have toddlers at home. Don’t call several house helps. Meet and greet sessions can wait, COVID won’t. Be on optimum guard. If you see any symptoms, self-isloate, even if its normal flu. Since, there has been a change in weather, children may fall sick. However, don’t ignore the symptoms, think of it as COVID,” Paul opines.

Dr Sumit Gupta, Pediatrician, Columbia Asia Hospital, Ghaziabad, agrees with Paul and says that the surge in cases might be because of the mutant virus.

“We have received around 50 per cent rise in cases of COVID in children since the end of March and more than half of them show symptoms. More than 60 per cent of all OPD cases in children are suspected COVID. There is an acute rise in number especially in Ghaziabad. The fact that more children are getting infected in this wave of the disease may have to do with the mutations in the virus, which has brought in many changes in the disease and its manifestations this time. Since many children are showing symptoms, we have to closely monitor them if they develop multisystem inflammatory syndrome  (MIS-C) and toxic syndrome, which may happen in severe cases,” Gupta tells you.

Experts tell you that MIS-C is a post-COVID complication that can result in swelling of joints, rashes, fever, diarrhoea and bloodshot eyes in children.

“About 50 per cent children that have been admitted to our hospital has, at least, one adult in the family who have tested positive. It is very rare that a child alone has tested positive. So, it is not the children, but their family members who got infected first. But having said that, kids have been, unknowingly, spreaders of the virus. Because until last year they were mostly asymptomatic,” Khilnani tells you.

Several data collected from a Chinese study of Covid-19 in children has confirmed that more than half of the children participated in the survey showed mild symptoms of fever, cough, sore throat, runny nose, body aches and sneezing; while around a third showed signs of pneumonia, with frequent fever, a productive cough and wheeze but without the shortness of breath and difficulty breathing  as seen in more severe cases.

Dr Manish Mannan, HOD — Paediatrics & Neonatology, Paras Hospitals, Gurugram, tells you that contrary to the prior belief with the rising cases it is clear that the amount of infection in children is the same as in adults. “It’s just that when they do get the infection they get much milder symptoms. Children are predominantly affected in their upper airways so they get cold-like  symptoms. The perception that children are less affected as compared to adults is also because of the fact that the virus needs a protein on the surface of a cell (a receptor) to get into the inside of a cell and start causing problems. A report from BBC stated that the Coronavirus seems to use the Angiotensin converting enzyme II (ACE-2) receptor for infecting others. It may be that the children have less ACE-2 receptors in their lower airways (lungs) than in their upper airways, which is why it is their upper airways that are predominantly affected, causing less severe issues in them. With that being said, the amount of infection in children has risen considerably as compared to the first wave but is still not same as that in adults presently,” Mannan tells you.

Another scary fact is the reports that suggest children under the age of one might be at a higher risk of severe illnesses with COVID.

“Toddlers may be at a higher risk of suffering from severe illnesses because of the immature immune systems. There are chances that they might develop breathing issues. However, as it is being said, it is too early for us to make a statement,” Gupta says.

In the absence of a proven vaccine for children, experts emphasise on the fact that there’s nothing much one can do except for following the guidelines laid out by the Government.

While, it is not recommended for children below five to wear masks, the World Health Organisation suggest children who are in general good health can wear a non-medical or fabric mask, if at all. This provides source control, meaning it keeps the virus from being transmitted to others if they are infected and are not aware that they are infected. The adult who is providing the mask should ensure the fabric mask is the correct size and sufficiently covers the nose, mouth and chin of the child.

Children with underlying health conditions such as cystic fibrosis, cancer or immunosuppression, should, in consultation with their medical providers, wear a medical mask. A medical mask controls spreading of the virus and protection to the wearer, and is recommended for anyone who is at higher risk of getting seriously ill from COVID-19.

“The only advice to the families is to stay back home and bring back the guard. Even for the older patients who have been vaccinated, we urge them to keep on following the precautions because vaccine alone won’t help. You have to be on optimum guard anyway,” Khilnani says.