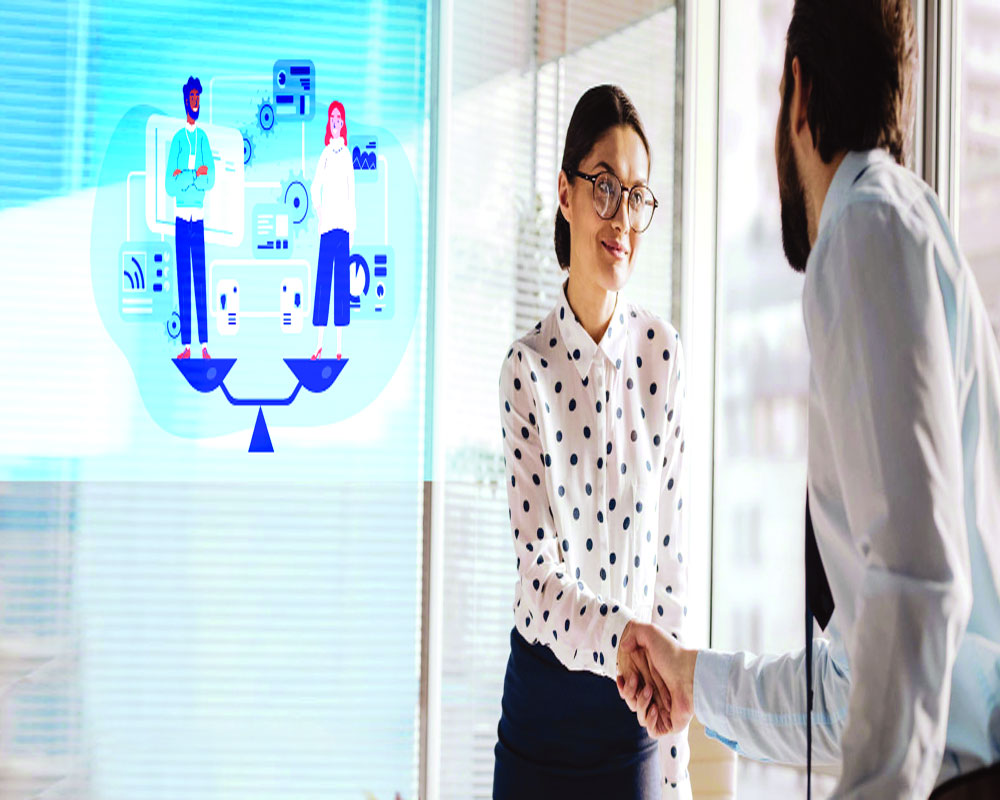 With companies and organisations becoming more accepting of building greater gender balanced workforces, the issue of safety and equality has either been assumed to be a de-facto outcome of diversity, or has been dealt with diversity and inclusion policies and laws on prevention of sexual harassment at the workplace, say Roop Sen & Uma Chatterjee

When Ramesh Subramaniam joined a multinational bank after graduating from one of the top management colleges of India, he expected a stint that would offer him opportunities for professional learning and growth. He grew up in a small town in Tamil Nadu and had studied in state run public schools and colleges where, he felt, the quality of teaching and competition was limited. He believed that it was by sheer dedication, grit and hard work that he had excelled in his academic career and was determined to carry it into his professional life. Three months into his joining the company, he was called by the Human Resource Manager who informed him that a couple of his women colleagues had complained about his behaviour towards them and reported that he is patronising and sexist in his attitudes towards women. It was an atypical sexual harassment complaint where the complainants did not accuse him of making any direct or indirect sexual proposition or lewd behaviours, the complainants believed that he considers women as unequal to him, inferior intellectually and in capability, and therefore the harassment was gendered in nature.

“It is not uncommon to find even senior managers in large companies in India to be patriarchal in their attitudes” says Sarala Tiwari (name changed upon request), an HR professional who has more than 25 years of experience in Indian and multinational companies. “I have seen how divorced women experience insidious stigma in one of the largest Indian companies whose main business is of tobacco. In our smaller cities or town units, where the employees are mostly local and has a lesser cosmopolitan culture, gender norms in the office are the reflection of the social culture of the community. So, if the prevailing norm at home is for women to be homemakers first and professionals next, or that women to be at the receiving end of male aggression, the same tend to get reflected at work in different ways, and which would get normalised and not get reported. The conflicts arise when people from more conservative communities get into cosmopolitan offices, and there can be a culture clash,” explains Sarala.

The value of gender diversity in the workplace gained recognition and acceptance only in the 80s and 90s, with more women joining the formal and informal workforce, breaking patriarchal barriers that relegated women to domestic work, mothering and unpaid caregiving labour. The year 2000 saw women make up 39.49% of the global workforce which declined marginally to 38.85% over 19 years, according to a World Bank study of 2019. And even then, women continue to be a severe minority in the Boards and management positions indicating patriarchal power dynamics of more men being in power than women within the corporate sector. So, while Ramesh’s case may seem like an aberration or an isolated case, sexism is much more prevailing in modern organisations that we care to admit, except that Ramesh’s expression of it may have been more unsophisticated, raw and honest.

The case for a common gender etiquette

With companies and organisations becoming more accepting of building greater gender balanced workforces and more recently even committing to be accepting of sexual minorities in the workforce, the issue of safety and equality has either been assumed to be a de-facto outcome of diversity, or has been dealt with diversity and inclusion policies and laws on prevention of sexual harassment in the workplace. The former proclaims commitment to equal rights and opportunities to minorities and non discrimination and the latter announces zero tolerance to transgression and violence wherein one uses power to indignity, abuse and exploit another person sexually. Both the instruments aim to build clarity on what is desirable and what is not or what will be promoted and what will be punished.

For example, most diversity policies suggest targets or processes to ensure diversity in recruitments and promotions. Sexual harassment policies define behaviours that will be seen as transgressive in nature — such as sexual propositions in exchange of professional favours or sharing sexually explicit verbal, non verbal, written or image content that are unwarranted. What these policies and laws struggle to work with are issues of intent, tonality, meaning making, assumptions or differential boundaries of safety and dignity.

“My boss keeps insisting that I should not travel in a taxi if I get late at work and either hire a private vehicle or ask my husband to come and pick me up,” says Shalini Agnihotri, a young marketing professional who lives in Noida and whose office is in Gurgaon. “I understand his intent may be that of concern but he would never say this to any of my male colleagues. What he does not realise that such benign sexism triggers envy or endorses ‘benevolent sexism’. And I don’t know how to tell him that I detest his suggesting to ask my husband to ‘collect me from work’ — which I find infantilising,” adds Shalini. Other women colleagues in the team do not share this experience because most of them live in Gurgaon and do not have to travel long distances.

“It gets uncomfortable when our boss tries to be one of us, and the way he tries to do it is even more weird,” says Suman Banerjee, a 24 year old man who works in one of the largest global tech-firms, and is based in Calcutta. “He tries to minimise any hierarchy between the ranks, and therefore instead of sitting in his office, he stills with us, his team in our workspace, which is great. He gets offended if the rest of us goes for a cigarette break and don’t include him. So, we started including him into our sutta-breaks (cigarette-breaks). It started getting weird when he started sharing sexual humour with us or telling us about his sexual exploits. He is a little younger to my father and it makes me feel very uncomfortable that he wants to bond with us through locker-room talk. Many of my colleagues actually don’t mind it and even encourage and join him, but with my social orientation, it does not fit,” says Suman.

Often, organisations, which believe in values of meritocracy, argue that gender should not have any bearing on one’s professional identity, and that a professional ought to be gender neutral. Neutrality is believed to be the way to dissolve the tensions that may arise from gender and sexual diversity. However, our senses of safety, dignity, transgression and humiliation are a function of gender and sexual dynamics between two or more persons and the system. Shalini’s context is coded in the way it is because she is a woman, because women in NCR are much more vulnerable to sexual violence than men going by reported crime statistics. It would be impossible to read a situation where Shalini would not be seen ‘gender neutrally’. In Suman’s case, the situation would have dramatically different implications if the manager tried to bond with women subordinates in the same way.

To deal with the complexities of dealing with the grey of gender dynamics at work, one wishes for a book of common etiquettes with clear list of do’s and don’ts. The most common approach to dealing with vulnerability to transgressions and violations, globally, or perhaps more so in the Western countries, is through enforcement of boundaries. Boundaries can help in creating safety and by making boundaries explicit, the vulnerability to transgressions can be lessened. For example, in order to eliminate prejudice against women and sexual minorities in recruitment, in Western countries or multinationals headquartered in Europe and the US, interviews are prohibited from asking personal questions regarding marital status, domestic arrangements, pregnancy plans or children. Similarly, the sexual harassment laws in India and most other countries, too, focus on prohibiting behaviours that can be transgressive, abusive and exploitative. However, the effective of this boundaries in making workplaces safer, more inclusive or dynamics is suspect.

The issue of gender based violations can stem from innocent transgression, as one might believe to be Ramesh’s case, where his attitudes are a product of socialisation, or it may be a produce of wilful prejudice wherein a person or persons would be exploiting power to assert patriarchal entitlements. When it comes to dealing with the inclusion of sexual minorities, organisations must accept and expect their workforce to experience struggles of guilt, shame, fear and prejudice because people across cultures have grown up (and continue to) in homophobic cultures. So, to believe that a progressive policy and organisational stance will eliminate everyone to internalise those values and re-orient one’s worldview and values is naive at best.

What may be more useful than chasing myths of uniform behaviours in organisations to neutralise the spill of diverse socialisations that people grow up with from their families, communities and societies is to study gender etiquette of organisations to understand underlying commonly held beliefs and values, notions of dignity and safety, equality and distinctiveness of genders. Seymour Parker, an American anthropologist, writes, “The ritual of gender etiquette is an institutionalised social performance whose smallest constituents, or symbols, serve as vehicles for the transmission of socially normative meanings of gender”. According to him, the need to go along with traditional gender manners is linked with a need for clear gender-role boundaries.

By hypothesis, therefore, every organisation will have its own gender etiquette at play which may be a product of the socialisations of its people on gender, sexuality and gender dynamics that they have received from their society, communities and families. It will get reflected not only in roles, behaviours and attitudes amongst the members of the organisation, it will get reflected in the hierarchy of values, ideas of fairness, notion of boundaries and dignity and the markers of competence and leadership. For an organisation to harness its potential of diversity, it requires an empathetic and curious approach to understand the system’s configuration on gender dynamics, rather than a by-the-book corrective or punitive approach.

The baseline to measure organisations cannot be restricted to the hardware — the physical and the tangibles of separate bathrooms, diversity policies, maternity and paternity leaves and creches alone. The baseline needs to include the intangibles — people’s attitudes and beliefs on gender, their valuing of virtues that may be associated with masculinity and femininity, and how these translate into organisational culture, practices and unconscious behaviours. Etiquette of a system is not something that can be imposed through policy, neither can organisations’ expectations from its people be linear, simplistic, restricted to do’s and don’ts on behaviours. Gender etiquette as a system should perhaps, be a commitment to engaging with questions on how the system values masculine and feminine principles in its management and governance.