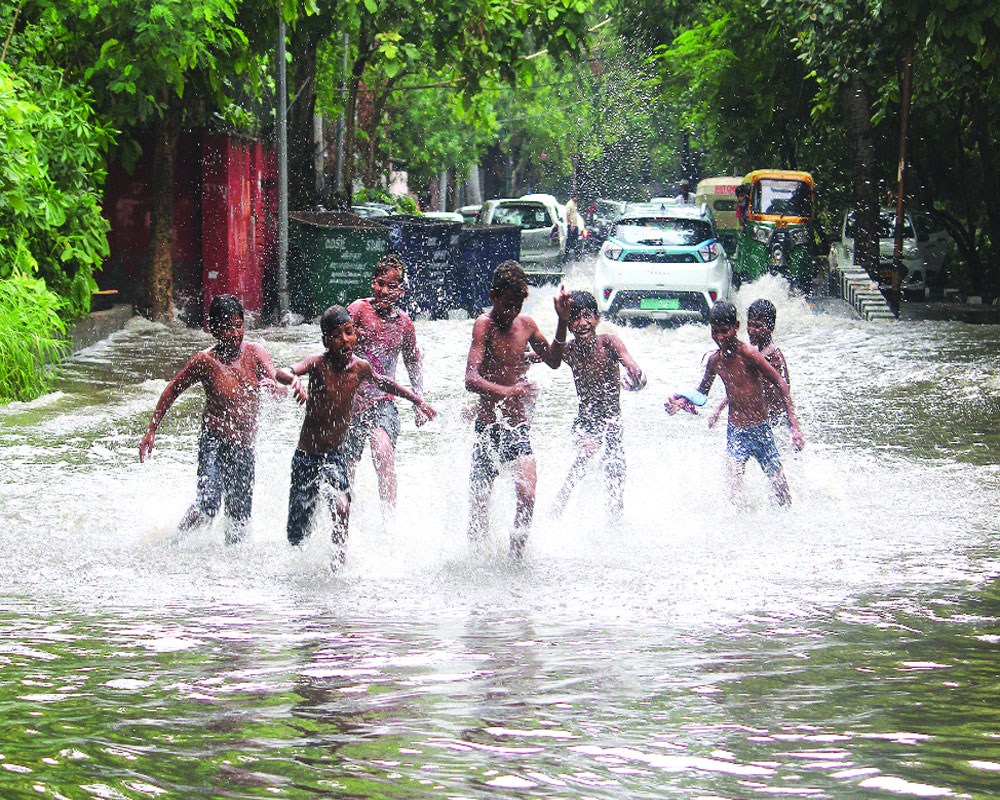 According to the India Meteorological Department (IMD)’s State of the Climate Report, the year 2016 (+0.71°C) remains the warmest ever year the country has recorded since 1901 while the year 2020 was the eighth warmest (despite the cooling effect of La Nina). This is marginally lower than the average global temperature rise of 1.2°C reported for the year 2020.

Interestingly, the past decade (2011-2020) was the warmest on record both globally and for India. The annual rainfall over the country in 2020 was 109 per cent of the Long Period Average (LPA) calculated for the period of 1961-2010. The Southwest monsoon rainfall too in the year 2021 has remained normal (96-106 per cent of the LPA) for the third straight year.

Climatologists like Professor Murari Lal opine that what is of concern is that the extreme weather and climate events linked with anthropogenic climate change have become more frequent and intense around the world since the 1950s.

“The sixth Assessment Report of the IPCC released only last week says that changes in extremes will be larger with projected global warming. India is one of the most impacted countries by extreme weather events and is at high risk due to its high vulnerability. Climatic disaster incidences have been increasing in recent decades, which is also the leading cause of natural disaster mortality. States like Odisha, Andhra Pradesh, Assam, Bihar, Kerala, and Maharashtra, with high populations, had the maximum mortality rates due to extreme weather events in the last two decades,” Professor Lal says.

Severe weather events associated with floods and cyclones contribute to maximum human deaths in India (28 per cent of the mortalities by cyclones in past 50 years is second only to floods which accounted for maximum mortality of 46 per cent) apart from massive economic losses.

“Floods are one of the most costly and dangerous natural hazards worldwide today. Some of the recent disastrous floods in India include the flash floods triggered by very heavy rainfall and cloudburst in Uttarakhand on 16-17 June 2013 and more recent one on 7 Feb 2021 (due to ice and rock avalanche), Srinagar in 2014, Chennai in 2015, Gujarat in 2017, Kerala flood in 2018 & 2019, Assam flood in 2020 and Himachal Pradesh in 2021. The major flood prone regions in India are in the Gangetic plains including Uttar Pradesh, North Bihar and West Bengal, the Brahmaputra valley, coastal Andhra Pradesh and Orissa, and southern Gujarat,” he tells you.

Professor Lal points out that Bihar is most flood-prone state, with 76 per cent population in the North Bihar living under the recurring threat of flood devastation. The State makes up 16.5 per cent of India’s flood affected area and 22.1 per cent of India’s flood affected population. The State’s North districts are vulnerable to at least five major flood-causing rivers during monsoon — Mahananda River, Koshi River, Bagmati River, Burhi Gandak River and Gandak — which originate in Nepal. Some south Bihar districts have also become vulnerable to floods from Son, Punpun and Phalgu rivers.

Recent trends indicate that flash floods which begin within six hours, and often within three hours of the rainfall are most often due to extremely heavy rainfall from thunderstorms (when natural watercourses do not have the capacity to carry excess water).

“These cloud bursts are identified as disastrous weather event in which, the heavy rainfall occurs over a localised area at rate of the order of 100mm per hour. The greatest increases are likely to occur in short-duration rain storms lasting less than a day, potentially leading to an increase in the magnitude and frequency of flash floods The cloud bursts occur during monsoon season over the orographically dominant regions like Himalayan region, north-eastern States and the Western Ghats due to strong monsoon circulation or the interaction of monsoon circulation with the mid-latitude westerly system. The associated convective cloud can extend up to and beyond a height of 15 km above the ground. At least 180 people were killed in landslides and flooding triggered by heaviest rain spell during July in two districts of Maharashtra this year,” Professor Lal says.

Heavy rains lashed the Latur district in Maharashtra through the day (66.09 millimetres of rainfall in 24 hours) on September 27 this year. A cloud burst and incessant rain in Kishtwar district within the upper reaches of Jammu on the intervening night of July 27-28, 2021 inundated villages and washed away several houses apart from loss of lives.

In Ladakh, cloud bursts hit two villages in Kargil district on July 28, 2021 and flash floods forced Kargil-Zanskar road to close. Ladakh is not known to be frequently affected by cloud burst phenomena. Leh is a cold desert and average rainfall for the month of August is 15.4 mm only — the highest rainfall ever recorded over Leh during 24 hours period has been 51.3 mm recorded on August 22, 1933 until August 2010 cloud burst.

This shows that the intensity of the rains has increased in recent times perhaps in association with mesoscale cloud burst and structural changes in monsoon clouds. Scientists have warned that extreme weather is likely to become more common and more intense in the coming decades as sea levels rise and the Indian Ocean becomes warmer. In India, floods caused by the extreme weather events such as very heavy rainfall,  flash floods due to cloud burst and associated landslides have resulted in economic losses of around $3 billion per year. It is, therefore,  critical to understand the changing behaviour and impacts of extreme rainfall to support rural and urban planning policies and the design of flood protection infrastructure in India.

The deaths due to heatwave and thunderstorms/lightning have also increased in recent years and need urgent attention. An abnormal increase in extreme weather events was experienced in the year 2019 when 73 heatwave spells were recorded during summer months against a normal of 17 (average during 1986–2016). Ocean temperatures are also becoming increasingly important because oceans are absorbing much of the additional heat trapped due to greenhouse gases in the atmosphere.

“More than 90 per cent of the excess heat absorbed by oceans raises the sub-surface ocean temperatures keep the cyclones intensifying because the strong winds churn up the ocean and take up that energy. As a consequence, the time required for intensification of cyclones and maintain stronger wind speed for longer duration is now shorter. The total lifespan of the ‘Fani’ cyclone in Bay of Bengal in 2019 was double the climatological lifespan,” Professor Lal explains.

Recent scientific advances lead us to confidently say that the increased intensity and frequency of some, but not all, of these extreme weather events is influenced by human-induced climate change. Extreme weather events cause both economic as well as humanitarian losses. Economic developments in the form of high value assets being built in climate vulnerable areas and ever increasing population concentration in urban centres, alongside changes in climate, will continue to increase economic losses due to weather events in the future.

“Despite the importance of understanding sub-daily rainfall from both a scientific and impact-centred perspective, we currently do not have a complete picture of how sub-daily extreme rainfall patterns might change in a future climate.  Quality-controlled global rainfall data at sub-daily time scales are still unavailable and modelling studies capable of resolving the physical processes that cause sub-daily extremes are scarce,” Professor Lal says.

There are also several alternative hypotheses about the mechanisms that can cause sub-daily extremes to increase with atmospheric temperature, with potential implications for their use in future predictions. The potential for highly localised effects like those due to orography, have also been identified recently. The issue remains whether extreme sub-daily rainfall has intensified —and will continue to intensify — as a result of climate change. Given the scientific appreciation of the link between greenhouse gas emissions and changes to atmospheric temperature, theoretical and empirical perspectives on the association between sub-daily rainfall intensity and atmospheric temperature must be reviewed.

Atmospheric temperature strongly influences the intensity of extreme rainfall, as warmer air is capable of holding more water than cooler air (governed by the Clausius-Clapeyron equation), and therefore has the potential to provide more moisture to rainfall events (rate of 6–7% per°C a certain temperature threshold of approximately 24°C).

In view of global warming and the expected intensification in rainfall extremes it is important to review the relationship between rainfall intensity and atmospheric temperature. In the tropics, the onset of convection and precipitation can be described as a phase transition, with strong increases in precipitation near a critical value of the water vapor path. Moreover, convective and large-scale rainfall have different spatial and temporal scales, so that one would expect changes in rainfall intensity with temperature to depend on the temporal and spatial scale as also on the cloud feedbacks through latent heat release.

Professor Lal tells you that the key challenge to our understanding and predicting weather and climate extremes in the coming years would likely depend on the following: Advances in weather prediction and climate modelling; advances in the understanding of the physical mechanisms leading to weather extremes; increased effort to extend the historical observational record, including reanalyses over longer historical periods.

“Improvements in remote sensing products that extend long enough to document trends and sample extremes; model characteristics that are required to reliably reproduce extreme events of different types and scales and understanding natural variability, including the interplay between a changing climate and natural variability, and improved characterisation of the skill of models to represent low-frequency natural variability in regional climate phenomena and circulation are others among th long list,” Professor Lal says.

Strengthening resilience and adaptive capacity to climate-related hazards and natural disasters in all countries is a target of Sustainable Development Goal 13: Climate Action.

In keeping with the discourse on mitigation, the Fifteenth Finance Commission (XVFC) in India for 2021-26 has recommended setting up disaster mitigation funds at central and state levels. In a departure from the expenditure-based approach to assessing state-wise allocations for the state disaster response and management fund, the XVFC for 2021-26 introduces a methodology that reflects the risk and vulnerability profile of each State.

Of the total fund to be given to a State for disaster management, 20  per cent has to be segregated as the State Disaster Mitigation Fund to be spent as per guidelines developed by Ministry of Home Affairs for the said purpose.

It is expected that this mitigation fund will bolster the State’s ongoing efforts to scale up climate-resilient infrastructure in collaboration with the Coalition for Disaster Resilient Infrastructure (CDRI)’. The vulnerable states have also proactively initiated risk and resilience assessment study for surface transport, power and drinking water sectors.

Understanding the risk of how and why frequencies or magnitudes of extreme weather events are changing can enhance our ability to accurately predict and project future weather and climatic states, which is crucial for Governments and businesses.

“An early weather warning and awareness may save losses to human life, but only robust future climate predictions can facilitate policymakers to plan risk mitigation infrastructure, optimal land use, and better insurance coverage for the vulnerable populations. Integrated weather-to-climate forecasting efforts on a broad range of timescales is therefore required with an ultimate goal of providing predictive risk-based forecasts of extreme events at lead times of days to seasons in India,” Professor Lal says.