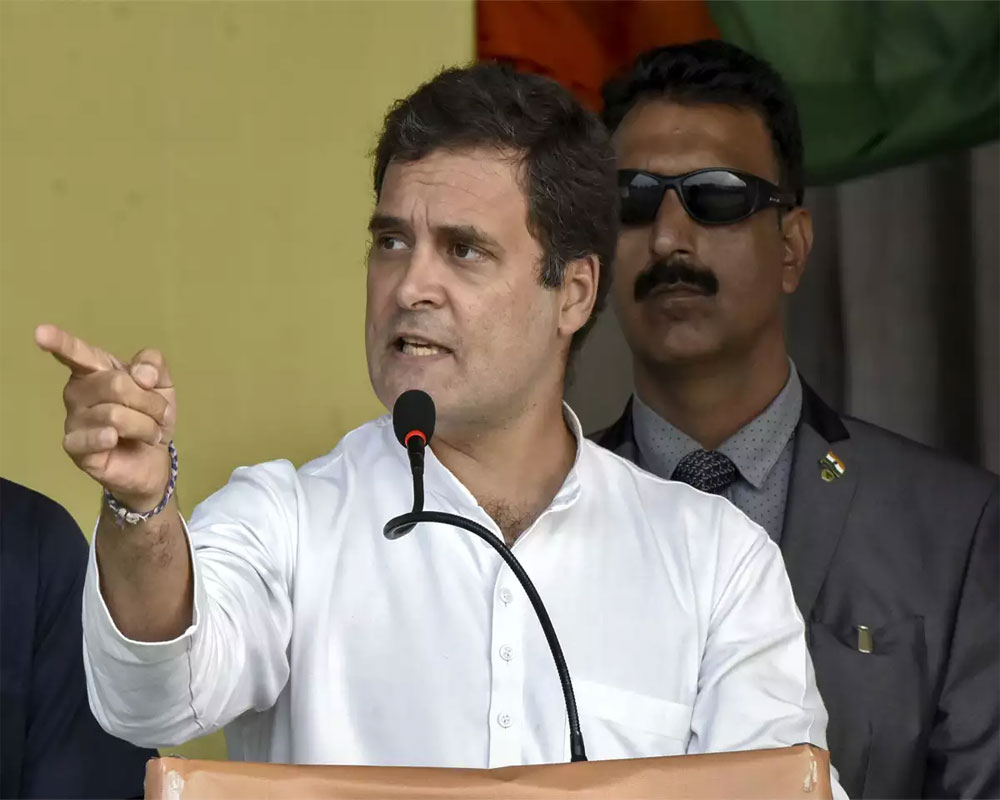 Congress leader Rahul Gandhi Saturday slammed the ruling BJP in Assam for allegedly attacking the culture, language, history, heritage and bonds of brotherhood in Assam and assured to protect the indigenous ethos if his party is voted to power in the state.

Gandhi, who had arrived for campaigning in poll-bound Assam on Friday, blamed the ruling BJP for "handing over" the entire state to outsiders and accused Prime Minister Narendra Modi of working only for two-three richest industrialists and not the general public of the country or for their welfare.

"The BJP in Assam and across the country is attacking culture, language, heritage and brotherhood ... We will protect you, your culture and identity. This is your state and it cannot be run from Nagpur (RSS headquarters)," hesaid at rallies at Mariani and Gohpur.

Hitting out at the ruling BJP for "handing over" the Assam to outsiders, he said "The government spent Rs 2,000 crore of your money to modernise Guwahati airport. Now the airport been snatched from you and given to Adani. This way everything in the country is being given to two-three richest businessmen friends of the prime minister,".

Gandhi said if a Congress chief minister assumes power in Assam the '5 guarantees' promised by the party will be implemented. A law will be introduced in the state assembly to nullify the CAA, five lakh government jobs will be given to the state's youths, each household will get upto 200 units of free electricity, housewives will get Rs 2,000 per month and minimum wages of tea garden workers be raised to Rs 365.

Mounting his attack, the Congress leader said "Modi had talked about 'Make in India'. But look at the labels of the products you are using. They are all 'Made in China'. That is because the prime minister broke the backbone of entrepreneurs through demonetisation and imposition of GST.

"GST was introduced promising simple tax and benefit for all. Modi brought it with five different taxes and highest at 28 per cent... Thousands of industries were shut down due to these two decisions. Modi says something but does something else," the former Congress president said.

Raising the price rise issue, he said the BJP-led government at the Centre is working for "hum do, humare do", (a government of two with two others meaning apparently Prime Minister Modi and Union Home Minister Amit Shah and Adani

This is being done while farmers, small businessmen, workers and other people are suffering due to high inflation.

"He (Modi) waived taxes and loans of two-three industrialists, but did nothing for you. He even attacked the farmers by bringing in the three farm acts. That is why we have brought the 5 guarantees for you," Gandhi said.

Charging the BJP administration of failing to fill up vacant government jobs, Gandhi said when Congress forms the government it will first fill up these posts and then give incentives to the private sector to create jobs.

He alleged that the BJP makes different promises at different places but never fulfills them.

"I never lie. See what I had said before polls in Chhattisgarh, Maharashtra, Rajasthan and Punjab. I said farmers loans will be waived. Within six hours of forming government in Chhattisgarh, it was done. Likewise, every promise in other states was fulfilled," he added.

The Congress leader was in Mariani, which will go to the polls in the first phase on March 27 to campaign for sitting Congress MLA Rupjyoti Kurmi and in Gohpur for APCC president Ripun Bora.