Cong will not implement CAA in Assam : Rahul

Cong will not implement CAA in Assam : Rahul 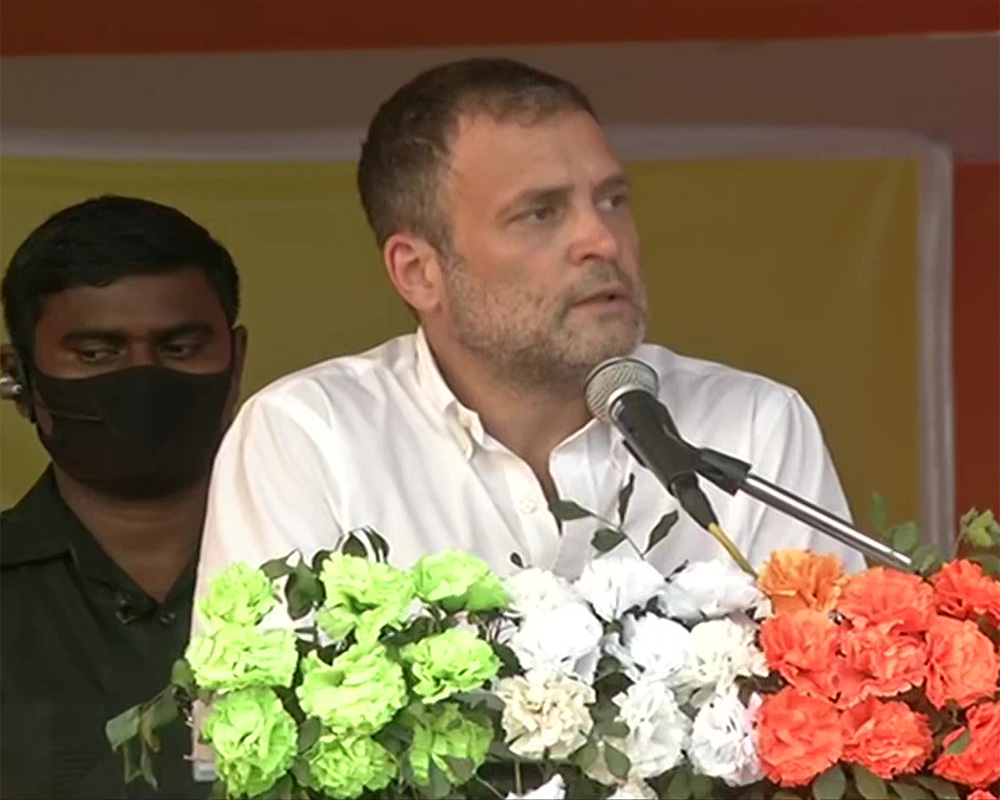 Congress leader Rahul Gandhi Friday assured that the Citizenship Amendment Act (CAA) will not be implemented in Assam if the party is voted to power in the state in the coming Assembly poll.

It will be ensured in the state assembly that the CAA is not implemented in Assam, Gandhi told students of Lahowal College in Dibrugarh district.

"In the other states, we will stop it (CAA implementation) after we (Congress) come to power at the national level," he said.

Asked to comment on whether BJP is mixing religion and politics, he said that the saffron party does not use religion but hatred to create divisions among different sections of the society.

"No religion has asked to use hatred. Where is it written in Hinduism that there should be 'nafrat' (hatred)? It is BJP that spreads hatred to divide society and wherever they do it Congress goes there to promote love, brotherhood and harmony," he said.

In an apparent reference to the RSS, the senior Congress leader said that there is a force in Nagpur that is trying to control the entire country. But the youth of today should resist it with love and confidence as they are the future of democracy.

Twenty years ago Assam was hit by violence but after Congress came to power it ensured peace and development.

"BJP ka kaam hain todna, hamaara kaam hain jodna (BJP's work is to divide but our job is to unite people), he said.

Gandhi said there is a direct relation between hatred and unemployment. "If hatred increases, unemployment will increase and vice versa. Can two sections of the society fighting against each other do business together? For business and employment oppurtunities to thrive, there should be harmony and brotherhood".

The senior Congress leader said that at present the country has a 'Hum do, Hamare do ka Sarkar' (a government of two with two others)- one in Parliament (apparently Prime Minister Narendra Modi and Union Home Minister Amit Shah) and two outside (Adani and Ambani likely).

"Assam's resources and wealth must go into the pockets of the Assamese. The state must be managed in the interest of the people here", the Congress leader said.

The erstwhile Congress government, he said, had laid the foundation for the country's future growth, employment and development by initiating several schemes, including MGNREGA and Food Security.

"Can you name the schemes started by BJP? We had promised in Chattisgarh to waive off farm loans and we did it. We have a record of not making promises in the air. We give guarantees", he asserted.

In Assam Congress has given '5 guarantees'. They are five lakh government jobs to youths in five years, upto 200 units of free electricity per household, Rs 365 daily wage to tea workers and Rs 2000 per month to housewives besides the assurance not to implement the CAA in the state, he said.

Asked by students about rising unemployment and Congress' plans to tackle it, Gandhi said that the priority of the party if voted to power will be to first fill up vacant posts and focus on sectors like health and education for creating new jobs.

He said, "There are certain places for privatisation, but not in education and health where public sector has a role. We are fighting against BJP on this", he said.

The biggest sale is taking place in the agricultural sector and its privatisation is being done through the three farm laws, he claimed.

To another question on why protesting students are being sent to jail, Gandhi said "The rulers are scared of the confidence of the youth. They are scared that if more become confident they cannot control. So the youth are sent to jail".

When another student pointed out that Prime Minister Narendra Modi does not visit Assam during floods but only during elections, the Congress leader quipped, "What can you give him during floods? So why will he visit you? But now you can give him votes, so he is visiting you.

"You can ensure that he does not come at all and stays at home by your vote. You have to save India's democracy as you are the future of democracy. More youths should enter politics and actively participate in fighting against the wrongs", he added.

Gandhi is on a two-day visit to the poll-bound north eastern state from Friday. He will campaign in upper Assam and will release the party's manifesto in Guwahati on Saturday, Congress sources said.