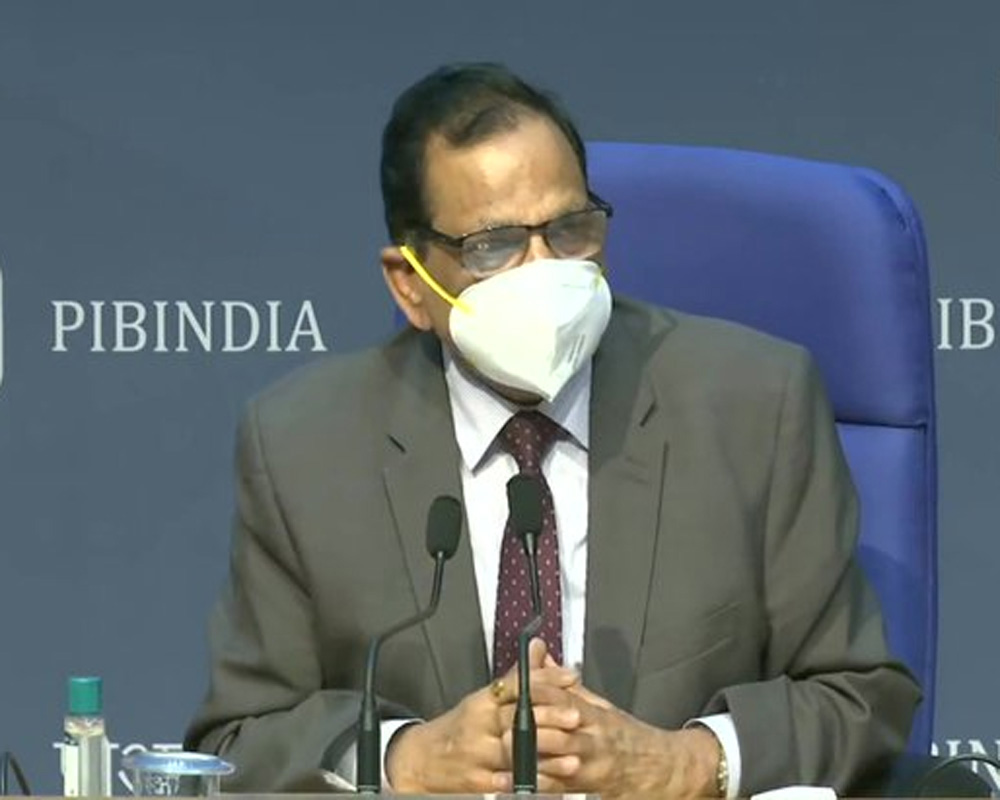 The Centre on Saturday strongly advised 12 states and Union Territories reporting a surge in coronavirus cases to significantly increase testing and ensure people follow COVID-appropriate behaviour, noting that one infected person could spread infection to an average of 406 individuals in a 30-day window without restrictions.

Highlighting that the country has seen the sharpest rise in weekly COVID-19 cases and fatalities since May 2020, the government said the focus was on 46 districts that have contributed 71 per cent of the cases and 69 per cent of the deaths this month.

"Of total 36 districts in Maharashtra, 25 are most affected that account for 59.8 per cent of the cases reported in the country during the past one week," the Health Ministry said.

Union Health Secretary Rajesh Bhushan chaired a high-level review meeting with additional chief secretaries, principal secretaries and secretaries (Health and Family Welfare) of 12 states and municipal commissioners and district collectors of 46 districts that are the most affected by rising cases and deaths because of COVID-19.

A granular analysis of affected districts in these states and UTs along with some key statistics was presented in the meeting, according to a statement.

Almost 90 per cent of the COVID-19 deaths continue to be in the category of those aged above 45 years. Findings of studies were highlighted which depicted that while 90 per cent people are aware, only 44 per cent actually wear face masks.  "One infected person could spread COVID-19 to an average of 406 other individuals in a 30-day window without restrictions which could be reduced to just 15 by decreasing physical exposure to 50 per cent and to a further 2.5 (average) by decreasing physical exposure to 75 per cent," the ministry said.

It was also highlighted that the concept of 'second wave' reflected more the laxity among everyone regarding COVID-appropriate behaviour and virus containment and management strategy at the ground level.

Hence, stringent action, including effective containment and contact tracing, for at least 14 days in the 46 districts was strongly recommended for breaking the chain of transmission and "not frittering away" the gains of collaborative efforts of last year, the Centre told the states.

It laid out a five-fold strategy for adoption by the states and UTs for effective containment and management of the COVID pandemic.

The states and UTs were asked to exponentially increase testing of COVID-19.

"The states were strongly advised for a significant increase of testing in all districts in line with their positivity rate, with increased share of RT-PCR tests, to a ratio of more than 70 per cent of total. Rapid Antigen Test (RAT) to be mostly deployed as a screening tool in flushing out cluster cases from densely populated areas," the ministry said.

They were also asked to carry out effective isolation and contact tracing of those infected.

"Testing leading to detection of positive cases is to be followed with prompt tracing of the close contacts and swift isolation. It was advised that an average of 30 close contacts are to be traced, tested and isolated in the first 72 hours," the Health Ministry said.

Health Secretary Bhushan highlighted the need for strict means to be employed for effective containment, with focus on micro-containment zone approach.

The ministry re-emphasised on the need to strengthen public and private hospital infrastructure and re-energise the healthcare workers for removal of complacency and fatigue.

"Targeted approach to reduce mortality rate and number of deaths to be implemented. In this regard, states strictly follow the Standard National Treatment Protocol for effective clinical management of the severe cases in ICUs. In this regard, it was pointed out that Punjab and Chhattisgarh despite being smaller in population size than Karnataka and Kerala, are reporting higher fatalities," the ministry said.

States also advised enforcement of COVID-appropriate behaviour through penal measures like heavy fines which sends a strong exemplary message among the people.

"States were informed that 70 per cent of the cases can be controlled by adherence to CAB alone," the ministry said.

The states were also asked to focus on universalisation of vaccination in the specified priority population age groups as an aid to containment strategy in districts where maximum cases are being reported.

"It was reiterated that there is no shortage of vaccines. States to optimally utilise all vaccination capacities within the public and private sectors in all districts, and make full use of the available vaccine stocks without keeping a buffer stock in anticipation of a shortage," the ministry said.

The four depots at Chennai, Mumbai, Kolkata and Karnal have the requisite buffer stocks and all requirements of states, based on their daily consumption and available stocks, are being met, it said.

"States were also asked to make advance planning of logistics and infrastructure management for 1-1.5 months as any unchecked spread of infection among the community may overwhelm the local administration. Re-appropriation of unused vaccine stocks in a district to focus on the high burden districts was also suggested," the ministry added.