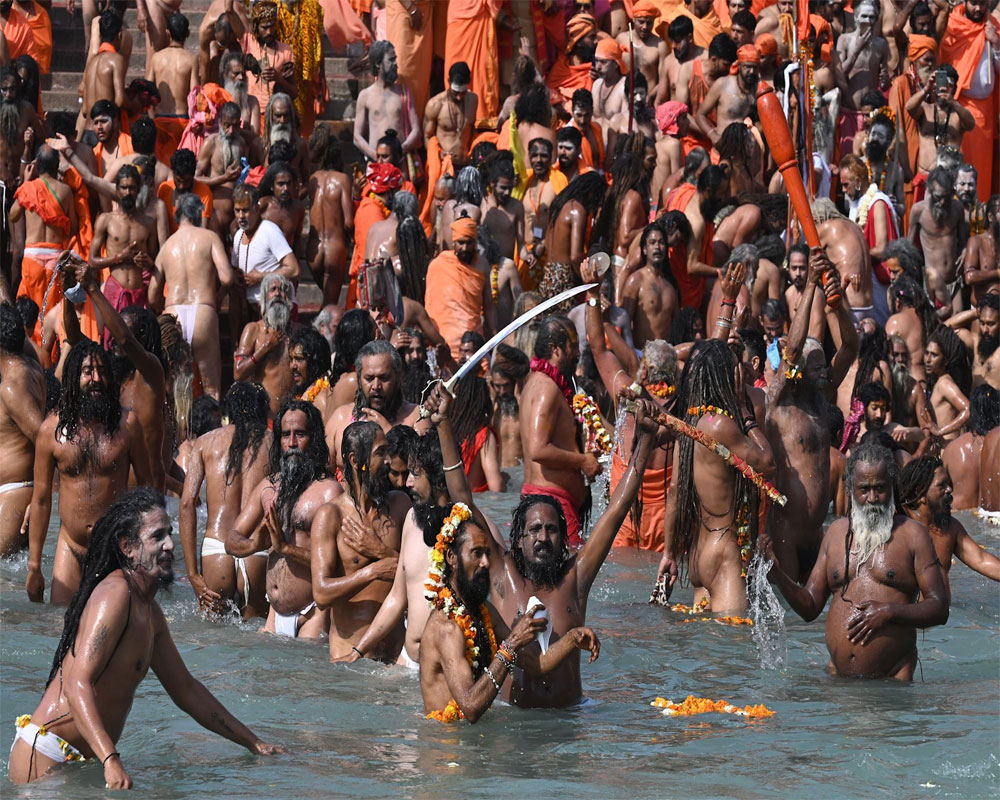 Amid rising coronavirus cases in the country, thousands of saffron-clad seers and ash-smeared Nagas flouted COVID-19 norms and converged at Har Ki Pairi here for a holy dip in the Ganga during the second royal bath of the Kumbh Mela on Monday.

The seers of different akhadas, led by their Mahamandaleshwaras, by turns took out grand Shobha Yatras through the main thoroughfare of the pilgrimage city to gather at Brahma Kund, Hari ki Pairi for the holy bath on the occasion of Somvati Amavasya.

Marching barefoot to their destination with many of them not wearing masks or observing social distancing, the seers took a dip in the river as they were showered with flower petals from helicopters flying above on behalf of the Uttarakhand government.

While Har ki Pairi, considered the holiest of the Ghats was reserved exclusively for the akhadas from 7 am onwards, common people also took the holy dip on the other ghats of the Ganga, revered by millions as a goddess.

The mela administration claimed that approximately 17.31 lakh devotees had taken the holy dip in the Ganga till 10 am.

Uttarakhand DGP Ashok Kumar said the Shahi Snan was being conducted smoothly throughout the Mela Kshetra from Haridwar to Devprayag.

So far, seers of three out of a total of 13 akhadas have bathed in the river at Har ki Pairi while bathing by devotees is underway at the other ghats, the DGP said.

Seers of Niranjani Akhada led by their Mahamandaleshwar Acharya Kailashanand Giri were the first to take a dip in the river on the occasion. Seers of Ananda Akhada also took bath along with them.

They were followed by the Joona Akhada saints led by Acharya Kailashanand.

Former King of Nepal Gyanendra Bir Bikram Shah was also among those who took a dip in the Ganga on the occasion. It was his maiden visit to Haridwar.

It was the second Shahi Snan during the ongoing Kumbh Mela which has been limited to just one month due to the rising cases of coronavirus.

The last Shahi Snan or royal bath was conducted on the occasion of Mahashivratri on March 11.