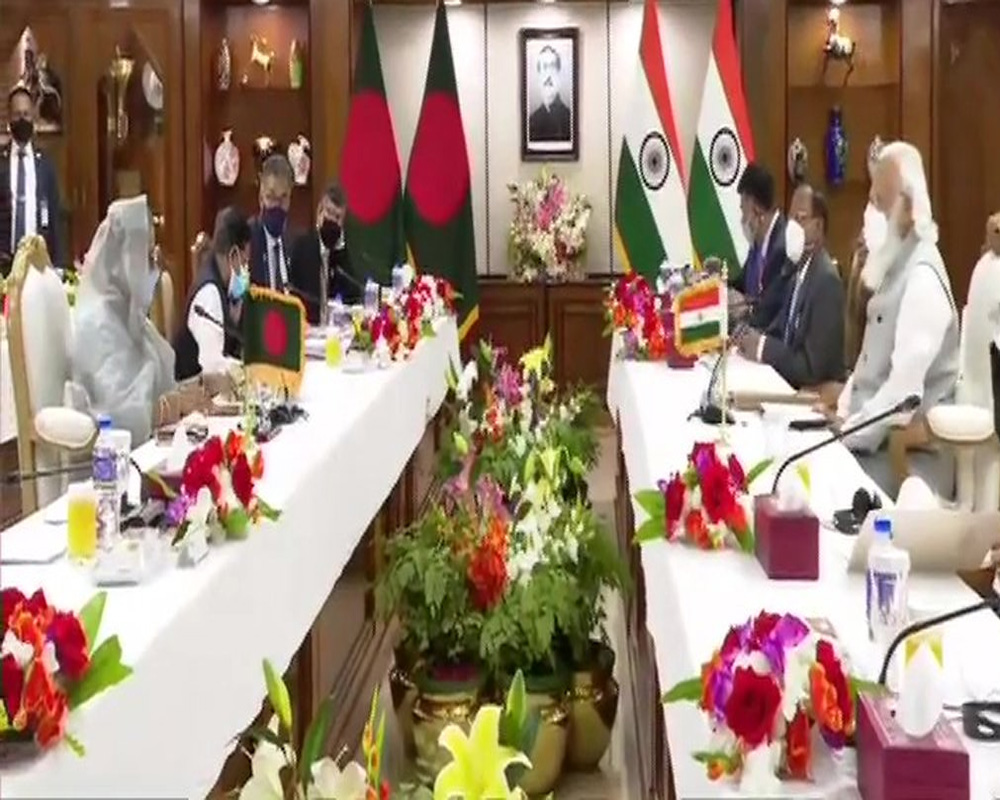 Prime Minister Narendra Modi met his Bangladeshi counterpart Sheikh Hasina here on Saturday for talks during which the two leaders are expected to discuss a wide-range of issues of bilateral and mutual interests.

Modi, who is visiting Bangladesh on his first trip to a foreign country since the outbreak of the coronavirus, will hold substantive discussions with Hasina following which the two sides would ink a range of agreements covering a number of areas of bilateral cooperation.

The two leaders are also likely to make new announcements of cooperation in areas of culture, preservation of spirit of 1971, health railways, education, border development, power cooperation and start-ups.

"Our partnership with Bangladesh is an important pillar of our Neighbourhood First policy, and we are committed to further deepen and diversify it. We will continue to support Bangladesh's remarkable development journey, under Prime Minister Sheikh Hasina's dynamic leadership," Modi tweeted ahead of his visit on Thursday.

"As the top leaders of the two countries would sit for bilateral talks, all major issues are expected to be discussed," Bangladesh Foreign Minister Dr AK Abdul Momen earlier said.

He said the two premiers would inaugurate some joint projects virtually and witness the signing of MoUs.

Modi's visit is taking place at a time Bangladesh is commemorating Mujib Borsho, the birth centenary of Sheikh Mujibur Rahman and 50 years of the country's war of liberation. The two countries are also celebrating 50 years of the establishment of diplomatic ties.

On Friday, Modi attended the celebrations of the golden jubilee of the country's independence, the birth centenary of ‘Bangabandhu' in Dhaka.

The two prime ministers held a virtual summit on December 17 during which Modi said Bangladesh is a key pillar of New Delhi's 'Neighbourhood First' policy, while Hasina described India as a "true friend" and asserted that both countries could play a significant role in the global and regional value chains by further integrating their economies as well as boosting connectivity.