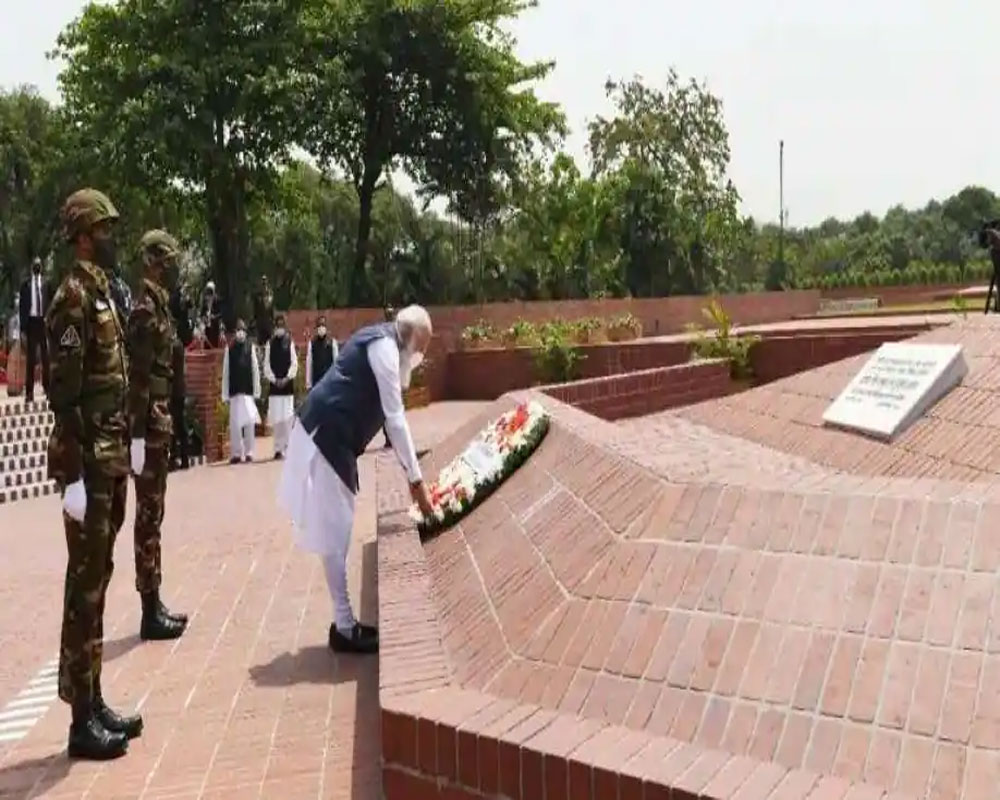 Prime Minister Narendra Modi on Friday visited the National Martyr's memorial at Savar here and paid homage to those who sacrificed their lives in the 1971 Bangladesh War of Independence against Pakistan.

“I pay my heartfelt tribute to the patriotic martyrs of Bangladesh whose glorious sacrifices enabled the birth of this great Nation. May every visitor to this revered ground honour the sacred memory of the millions who were slain but not silenced. Their valour will continue to inspire future generations to fight injustice and defend the cause of righteousness," Modi wrote in the visitor's book at the memorial.

“On behalf of the people of India, I pray that the eternal flame at Savar remains a lasting reminder of the noble victory of truth and courage over deceit and oppression,” he wrote.

Army bugles played the Last Post as the Bangladesh national flag was hoisted at half mast in a ceremonial manner as Prime Minister Modi stood in solemn silence in front of the memorial as a mark of respect to the martyrs after placing a wreath.

Designed by Syed Mainul Hossain, the memorial at Savar, about 35 km north-west of Dhaka, comprises seven pairs of triangular-shaped walls -- each representing a significant chapter in Bangladesh's history, including the 1952 'Bhasha Andolan' (Language Movement) -- through which Bangladesh became an independent nation from Pakistan.

On reaching the memorial, Modi planted a sapling of the Arjuna tree "to commemorate sacrifices of the patriotic martyrs of Bangladesh", the Ministry of External Affairs (MEA) tweeted.

"This sapling has been planted as a mark of respect for the valorous martyrs of Bangladesh," the Prime Minister's Office tweeted.

Sharing a picture of Modi laying the wreath at the memorial, the Ministry of External Affairs tweeted, "Prime Minister @narendramodi paying solemn tribute at the National Martyr's Memorial to the brave-hearts of the Liberation War of Bangladesh, for their great sacrifices."

"Engaging the Bangladeshi political leadership across the spectrum! PM  @narendramodi  meets political leaders from 14 Party Alliance along with convener. Discussions centred on diverse issues of our bilateral relations," the MEA tweeted, sharing a picture of the meeting.

Modi arrived Dhaka on a two-day visit during which he will attend the celebrations of the golden jubilee of the country's independence, the birth centenary of ‘Bangabandhu' Sheikh Mujibur Rahman and hold talks with his counterpart Sheikh Hasina.

Modi, who is visiting Bangladesh on his first trip to a foreign country since the outbreak of the coronavirus, was received by Prime Minister Hasina at Dhaka's Hazrat Shahjalal International Airport upon his arrival.

A salute of 19 guns and Guard of honour were accorded to Prime Minister Modi at the airport.