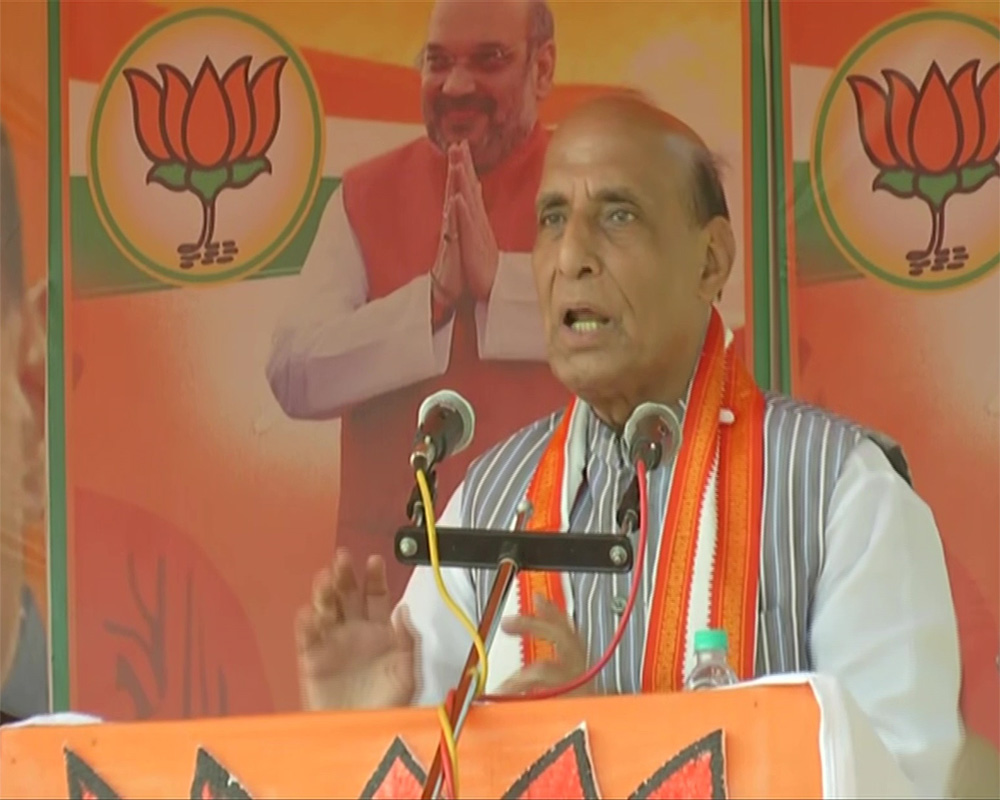 Slamming the Mamata Banerjee government over alleged slide in the law and order situation, Defence Minister Rajnath Singh said on Tuesday the "khela" (game) that will be played in West Bengal after the BJP's victory in the assembly election will be that of development and peace.

He asserted the BJP will form its government in the state winning more than 200 of the 294 seats.

Joining the campaign blitzkrieg that the BJP has launched, with several top party leaders holding meetings and rallies regularly to snatch Bengal from the TMC, Singh, who was once considered a friend of Mamata Banerjee in the saffron camp, asked what the two-time chief minister has done for the people of the state except for bringing disaster to them.

Questioning what the Trinamool Congress supremo Mamata Banerjee means by "khela hobe" (the game will happen), Singh told a public meeting here in West Midnapore district that "the game of development and peace will be played in Bengal".

He said "asol parivartan" (true change) will usher in on May 2, the day of the counting of votes for the eight-phase assembly elections that commence on March 27.

"The BJP will form a government in Bengal with more than 200 seats," he asserted.

The BJP had won 18 of the 42 seats in West Bengal in the 2019 Lok Sabha elections, emerging as the main challenger to the ruling TMC in the assembly polls.

In a reference to the insider-outsider debate that the TMC has started while branding the BJP a party of outsiders, he said the saffron party is the present-day avatar of Jana Sangh, which the son of the soil Syama Prasad Mookerjee had founded.

Claiming that the Mamata Banerjee government has not been able to maintain law and order in West Bengal, he said, "Go to Uttar Pradesh or any other state where BJP is in power, there is peace."

He said the Narendra Modi government has allocated Rs 25,000 crore in the Union Budget for development of the highways in West Bengal.

"The roads being built in the state are from funds released by the Modi government and not Mamata Banerjee," he asserted.

Singh said Rajiv Gandhi, as the prime minister, had lamented that out of every rupee sent for welfare works, only 16 paisa reached the people.

But the Modi government has ensured that every paisa released by the Centre reaches people on the ground for which PM Jan-Dhan Yojana has been launched so the money could be directly credited to the bank accounts of the beneficiaries.

Claiming that the Mamata Banerjee government has not implemented the Centre's welfare programmes for the poor and backward sections, he said, "It is your duty as the chief minister of the state to reach the welfare schemes of the central government to the people."

Claiming that the Pradhan Mantri Awas Yojana has not been implemented by the TMC government, Singh assured that every family in the state will have a house by the beginning of 2022, if the BJP comes to power in Bengal.

He said while farmers in the rest of the country have got funds in their accounts under the PM Kisan Samman Yojana, those in West Bengal have not benefited since the Mamata Banerjee government has not sent the list of potential beneficiaries.

He assured that the beneficiaries will be given the money with arrears once the BJP comes to power.

Singh said once a BJP government is formed, no one will be able to extort money from people or indulge in violence.

He assured the people of West Bengal that every political worker, whether from the Left, the TMC the Congress, or the general public, will be safe under a BJP dispensation.

"Mamata didi had given the slogan of 'Ma, Mati, Manush' (mother, land, people), but now neither Ma is safe nor the manush or the mati of Bengal are secure," he said.

He said recently the chief minister suffered a "little injury" and she blamed the BJP for that.

Investigating agencies, however, maintained she got injured because of the lacunae in her security arrangement and not by BJP workers, he said.

"BJP workers can never raise their hand on anyone," he asserted, adding party activists found indulging in any such activity will be shown the door.

Claiming that anywhere between 150 and 200 BJP workers have been killed in political violence during the TMC rule, Singh asked "can Mamata didi bring them back to life for their mothers".

Alleging that 1,500 to 2,000 BJP workers in the state are missing, he said the chief minister does not say a word about that.

"The BJP does not do politics for forming government but for the development of the country," he asserted, and added the party, if voted to power, will transform West Bengal from a "police state to public state".

Singh said the Modi government brought Jammu and Kashmir on par with any other part of the country by abrogating Article 370 of the Constitution.

With the conduct of panchayat elections in Jammu and Kashmir, people there have realised for the first time what a democratic system means, he said.

"India has become a powerful country under the Modi government," he asserted.

The Defence Minister said earlier no one could talk to China looking in the eye but Prime Minister Narendra Modi changed the narrative with sheer courage.

"Our soldiers have given appropriate response and the situation changed," he said, referring to the military disengagement in Ladakh after a tense stand-off between Indian and the Chinese armies.