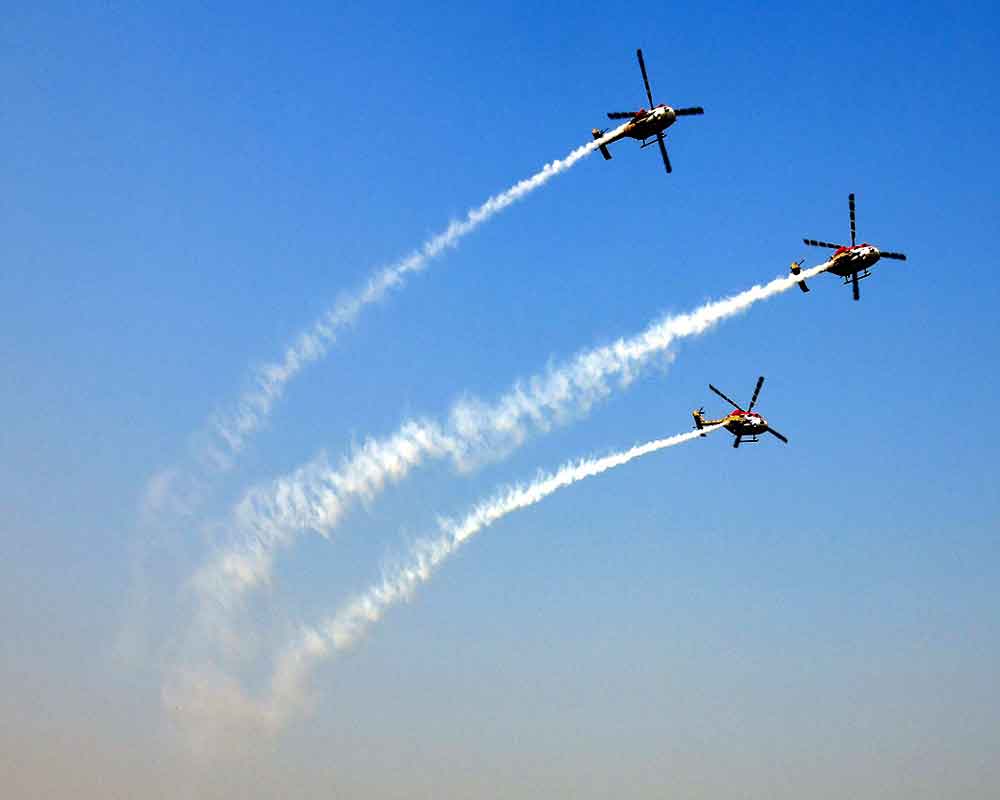 To inculcate the spirit of nationalism among the Kashmir youth, the Indian Air Force is holding an air show over Srinagar's Dal Lake.

The show will be witnessed by school children and college going youth. According to Divisional Commissioner Kashmir, Pandurang K. Pole, the show is a part of the ongoing celebrations commemorating 'Azadi ka Amrit Mahotsav' and it would make the youth aware about the job opportunities in the Indian Air Force.

"If one wants to become a pilot he needs to know that the recruitment in the IAF starts at a very young age and the process of becoming a pilot is over by the time a person attains the age of 23 years. The youth need to be informed that their dreams can get wings if they motivate themselves when they are in schools," Pole said.

Till August 5, 2019 -- when the Centre announced its decision to abrogate J&K's special status and divided it into two union territories -- the politicians who ruled the erstwhile Himalayan State didn't pay much attention towards honing the skill of youth and inculcating the spirit of nationalism among the younger generation.

Though Army and other security forces used to conduct regular recruitment drives in every nook and corner of Jammu and Kashmir but effort on the local level was missing. The politicians remained busy in raising slogans and harping about J&K's relation with the Union of India being temporary. Had they tried to create awareness among the youth about India being a great country with diverse cultures and religions, Jammu and Kashmir would have never witnessed Pakistan sponsored militancy and the bloodshed for three decades.

The air show slated for September 26 would have IAF's skydiving team Akash Ganga and Suryakiran Aerobatic and Display Team performing in Kashmir after a gap of 14-years. The theme of the show is 'Give Wings to Your Dream', besides motivating youth to join the Indian Air Force it would also promote tourism in the region. The event will be flagged off by J&K Lieutenant Governor Manoj Sinha at the Sher-e-Kashmir International Conference Centre (SKICC) overlooking the Dal Lake.

Students, who will witness the show, will be familiarised with the new technological advancements achieved and incorporated by the IAF in the past few years.

Stalls will be established at SKICC where students will be informed about the achievements of the Air Force, employment opportunities in the IAF, recruitment rules and eligibility criteria. The event would also consist of a photo exhibition depicting the history of the IAF.

J&K's transition into a Union Territory has proved to be a blessing in disguise for the people as it has opened a plethora of opportunities for them.

Many things which never used to reach the erstwhile state due to the so-called special status have arrived with a bang in the newly carved out Union Territory of Jammu and Kashmir.

Soon after J&K's special status was scrapped, thousands of young men turned up for an army recruitment drive in Reasi district on September 3, 2019. The army had registered more than 29,000 men between the age group of 17 and 21 years for the drive.

It proved to be the beginning of a new dawn breaking out in J&K and since then youth have been participating in the recruitment rallies in droves. Many have also completed their training successfully and are serving the country. The erstwhile political regimes were not able to channelise energies of Kashmiri youth in a positive way.

This factor had far reaching consequences as it allowed the militant groups to lure the gullible youth into their ranks in the lieu of money that used to flow into J&K through illegal Hawala channels from Pakistan and other countries. But after the crackdown launched by the National Investigation Agency (NIA) all these channels have been blocked. It's unfortunate that Kashmiri youth were never informed by their leaders about the opportunities available in the security forces and other allied departments.

This factor also led to youth getting misled and carried away. Only thing which the erstwhile political regimes offered to J&K people were class-IV jobs that too were provided on recommendations. Mainstream Kashmiri politicians refraining from calling themselves "Proud Indians", also helped the cause of Pakistan and its advocates in Kashmir. Leaders failed to tell their people that they have to remain loyal to the country they belong to.

Youth responded in a positive way after J&K's special status was done away with, many Kashmiri leaders predicted that the Valley would burn and it would end up in the lap of Pakistan. But their predictions have fallen flat and they have been left red faced. Youth have joined the bandwagon of peace, prosperity and growth. They are out to chase their dreams. They have realised that taking up arms means the end of life. They are choosing life over death.

During the past two years, youth have participated in talent hunt shows, sports activities, recruitment drives and the competitive exams. Recently Director General of J&K Police, Dilbag Singh, stated that militant recruitment in Kashmir has come down considerably as the youth are acting wisely. He made it clear that everyone wants the youth to focus on their life and career and to not indulge in any irresponsible activity.

The J&K Police Chief asserted that the number of overground workers in Kashmir has reduced by half as compared to the previous years and no local militant is active in Kupwara, Baramulla and Sopore.

The DGP's statement has vindicated the fact that Kashmiri youth after being provided with the new opportunities have turned their backs towards the militants and the militant handlers sitting across the Line of Control (LoC).

The million dollar question is what couldn't happen in 30-years, how it has been achieved just within a span of two years? The answer is simple, i.e., the present dispensation in Jammu and Kashmir has been able to promote the spirit of nationalism among the youth.

There have been no sloganeering or false promises. Everything has been transparent. The most important message which the helmsmen have conveyed to the people of Jammu and Kashmir is that they are a part and parcel of India and they should not shy away from declaring themselves as "Proud Indians".

Two years after the abrogation of Article 370, Kashmiri youth are carrying Indian Tricolour everywhere. By taking part in the recruitment rallies of the security forces, they have proven it to the hate-mongers and propagandists that they are ready to sacrifice their lives for their motherland and are no more interested in separatism and sedition.