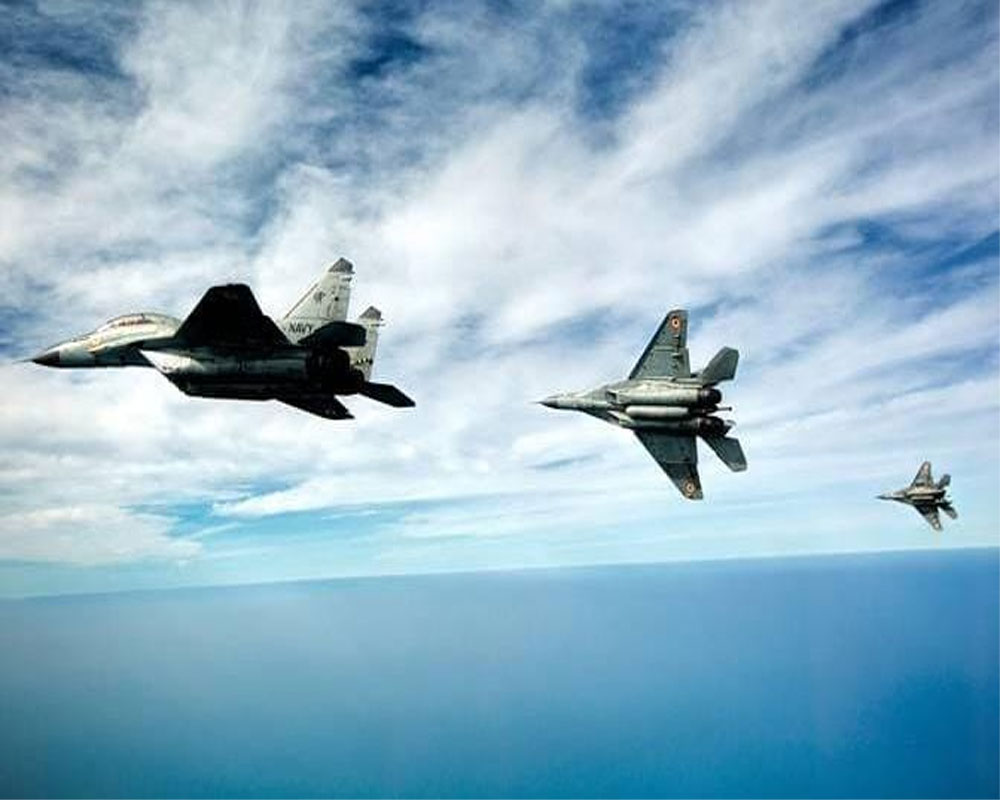 India and the US on Wednesday kicked off a two-day multi-domain wargame in the Indian Ocean involving an array of air defence platforms to further consolidate their operational synergy in the face of China's increasing military presence in the region.

The US has deployed its naval carrier strike group, led by the nuclear-powered aircraft carrier USS Ronald Reagan, as well as a fleet of F-18 fighter jets and E-2C Hawkeye all-weather aircraft for the exercise, officials said.

The Indian Navy has also deployed a fleet of P8I maritime surveillance aircraft and MiG 29K jets, apart from other platforms.

The US Carrier Strike Group (CSG) is currently deployed in the Indian Ocean region.

A carrier battle group or carrier strike group is a mega naval fleet comprising an aircraft carrier, accompanied by a large number of destroyers, frigates and other ships.

He said the two-day exercise aims to strengthen the bilateral relationship and cooperation by demonstrating the ability to integrate and coordinate comprehensively in maritime operations.

Officials said the high-tempo exercise will include advanced air-defence drills, cross-deck helicopter operations and anti-submarine manoeuvres with an aim to hone the war-fighting skills and enhance interoperability between the two sides.

The exercise is being carried out south of Thiruvananthapuram, on the western seaboard.

The officials said the exercise is focussing on multiple areas, including enhancing the aspects of interoperability, nuances of international integrated maritime search-and-rescue operations and exchange of best practices in the maritime airpower domain.

The Indo-US defence ties have been on an upswing in the last few years.

In June 2016, the US had designated India as a "Major Defence Partner".

The two countries have also inked key defence and security pacts over the last few years, including the Logistics Exchange Memorandum of Agreement (LEMOA) in 2016 that allows their militaries to use each other's bases for repair and replenishment of supplies as well as provides for deeper cooperation.

The two sides have also signed the Communications Compatibility and Security Agreement (COMCASA) in 2018 that provides for interoperability between the two militaries and the sale of high-end technology from the US to India.

In October last year, India and the US sealed the Basic Exchange and Cooperation Agreement (BECA) to further boost the bilateral defence ties.

The pact provides for the sharing of high-end military technology, logistics and geospatial maps between the two countries.