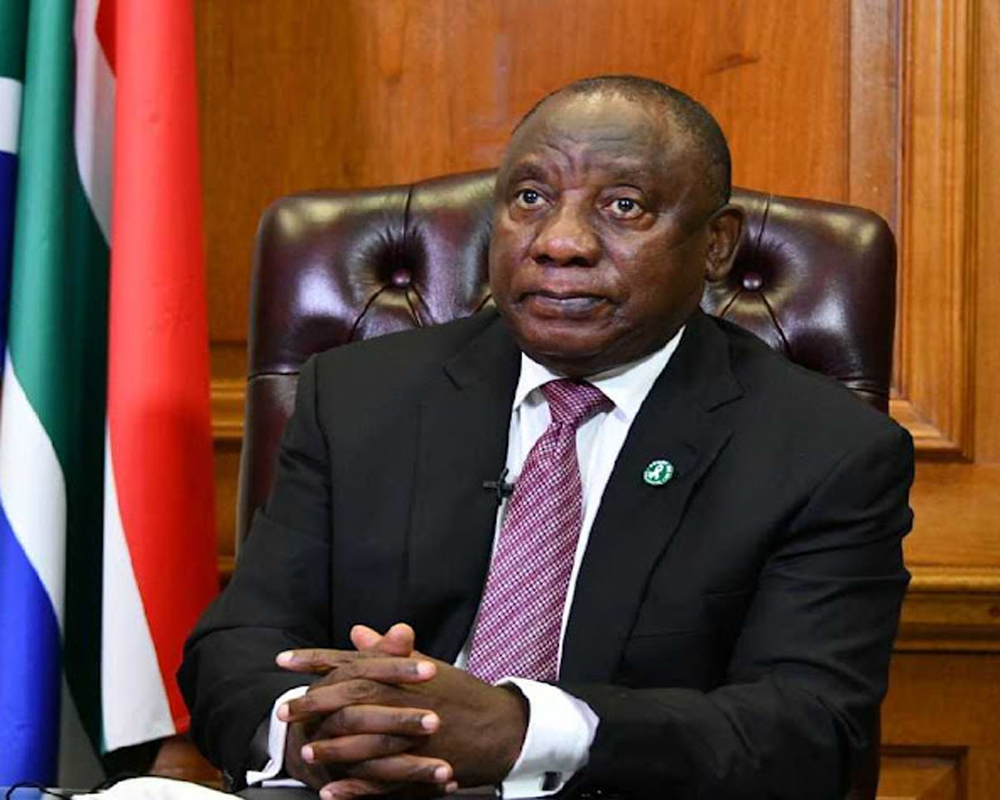 South Africa will remain on the lowest 'Level One' of its five-level lockdown strategy to fight the Covid-19 pandemic despite the global panic around the detection of the Omicron variant in the country, President Cyril Ramaphosa announced on Sunday.

Ramaphosa also called on more than 20 countries that have imposed travel bans to and from South Africa and its neighbours to immediately end the ban to avoid further harm to the economies of these countries, which have already been battered by the pandemic.

“In taking the decision not to impose further restrictions at this stage, we considered the fact that when we encountered previous waves of infection, vaccines were not widely available and far fewer people were vaccinated,” Ramaphosa said in a national broadcast.

“That is no longer the case. Vaccines are available to anyone aged 12 and above, free of charge, at thousands of sites across the country.

“We also know that the coronavirus will be with us for the long term. We must therefore find ways of managing the pandemic while limiting disruptions to the economy and ensuring continuity,” the president added.

Commenting on the travel ban, Ramaphosa called for an immediate reversal of the ban.

“(The ban) is a clear and completely unjustified departure from the commitment that many of these countries made at the meeting of G20 countries in Rome last month.”

“These restrictions are unjustified and unfairly discriminate against our country and our Southern African sister countries. The prohibition of travel is not informed by science, nor will it be effective in preventing the spread of this variant. The only thing the prohibition on travel will do is to further damage the economies of the affected countries and undermine their ability to respond to, and recover from, the pandemic.”

Ramaphosa said there was no scientific justification for keeping these restrictions in place.

Placing great emphasis on the need to use vaccination as the primary defence tool in fighting the virus, Ramaphosa said a task team led by Deputy President David Mabuza has been established to report back on suggestions that vaccines be made compulsory in some circumstances.

“As individuals, as companies and as government, we have a responsibility to ensure that all people in this country can work, travel and socialise safely.

“We have therefore been undertaking engagements with social partners and other stakeholders on introducing measures that make vaccination a condition for access to workplaces, public events, public transport and public establishments, “the president said.

Ramaphosa said discussion has already been taking place with the business and labour sectors, with broad agreement on the need for compulsory vaccination.

He did not comment about the growing anti-vaccination proponents, including some political parties, and even some lawyers who have argued that forcing people to take vaccinations would undermine their constitutional rights.

“We realise that the introduction of such measures is a difficult and complex issue, but if we do not address this seriously and as a matter of urgency, we will continue to be vulnerable to new variants and will continue to suffer new waves of infection,” Ramaphosa said.

“These variants may well be more transmissible, may cause more severe disease, and maybe more resistant to the current vaccines.

“Instead of prohibiting travel, the rich countries of the world need to support the efforts of developing economies to access and to manufacture enough vaccine doses for their people without delay,” Ramaphosa concluded.

South Africa recorded 3,220 coronavirus cases in the last 24 hours, up from about 100 daily just over a week ago, but scientists said there was no need to panic about Omnicron yet because not enough was known about it.

The Omicron variant, feared to spread faster and partially reduce vaccine protection, was identified in South Africa earlier this week and classed as a variant of concern by the World Health Organisation (WHO).

A “variant of concern” is the WHO's top category of worrying COVID-19 variants.

Countries around the world are currently racing to introduce travel bans and restrictions on southern African countries in an effort to contain Omicron's spread.

European countries along with the UK have banned travel to and from South Africa and neighbouring countries of Namibia, Zimbabwe and Botswana, as well as Lesotho and Eswatini (formerly Swaziland), both of which are landlocked within South Africa.

Other countries include Mauritius, Israel, Sri Lanka, Pakistan, the US, Canada and the Netherlands.

In New Delhi, the Indian government asked all states and union territories to conduct rigorous screening and testing of all international travellers coming from or transiting through South Africa, Hong Kong and Botswana, where the new variant has been detected.