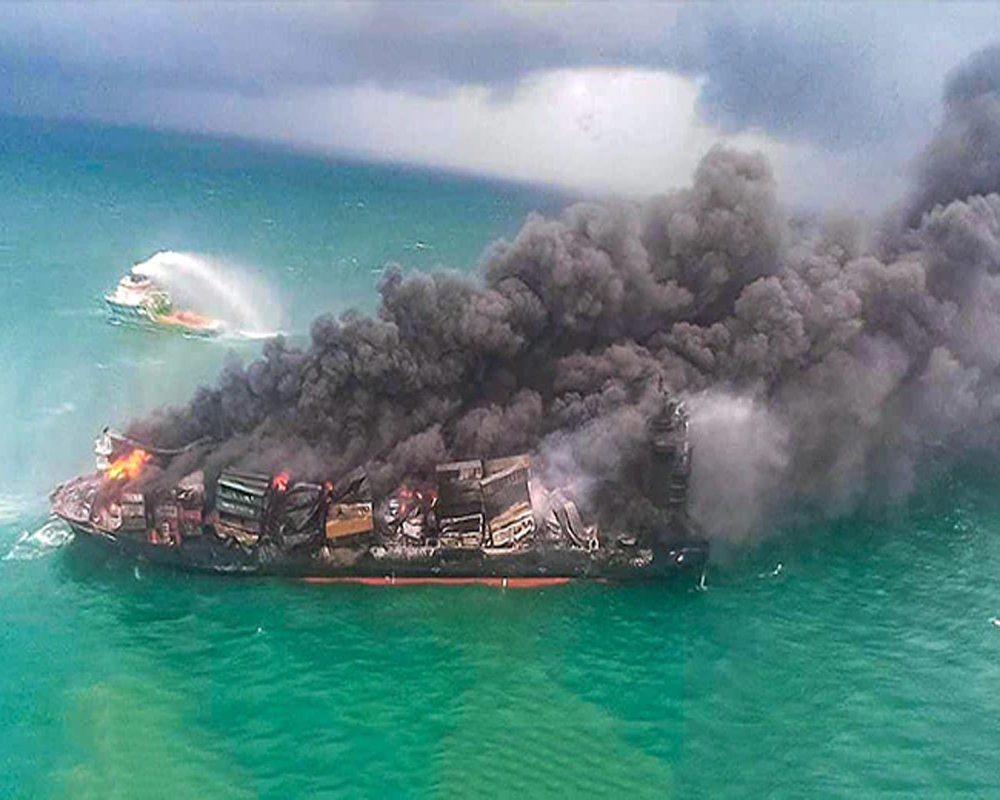 Sri Lankan Navy, Sri Lanka Ports Authority and the Indian Coast Guard were all working to detect and stop any possible oil leak from the ship, they said.

The ship 'X-Press Pearl' still remains half submerged, with the aft section getting stuck in the shallow bottom, 21 meters deep, officials said.

Captain Indika de Silva, the Sri Lankan Navy spokesman, on Wednesday said the ship could be towed only for a few hundred meters when it hit the sea bed. The ship's stern had settled on the bottom while the bow was floating.

The operations team said it was not still clear if the 300 tonnes of bunker oil which was on board had been affected after it was engulfed in flames since May 21.

The cargo vessel, carrying a consignment of chemicals and raw materials for cosmetics from Hazira in Gujarat caught fire on May 20 in Sri Lankan waters outside the port of Colombo.

All 25 crew members of the ship -- of Indian, Chinese, Filipino and Russian nationality -- were rescued on May 21.

The Chairperson of the Marine Environment Protection Authority (MEPA), Darshani Lahandapura said the salvors have been advised to seal any leak that might be there and also take action to pump out any oil whenever possible and also to put in place counter measures to prevent any spill.

She said the assistance of the Indian Coast Guard was also needed in the task.

“Indian Coast Guard vessels are here. They are very ready to help. They have booms and dispersants,” she said.

MEPA has called for reports every 3 hours in order to closely monitor the situation over possible oil spill.

An international firm, Oil Spill Response Limited (OSRL) has also joined in the effort to prevent an oil spill.

The chairman of the Sri Lanka Ports Authority Daya Ratnayake said the ship had been carrying dangerous cargo – not entirely meant for Sri Lanka – and consisted of Nitric Acid, 25 tons among other chemicals in 81 containers.

He said there was no sign of an oil spill yet.

“Our people are ready and remain on alert. We will not try to move the ship until we further establish what still remains within the ship, oil and any other dangerous cargo,” Ratnayake said.

Police spokesman Ajith Rohana said the police Crime Investigation Department was continuing its investigations into the matter. Statements have been recorded from the crew.

“The police have obtained the ship's container storage plan by quizzing the chief officer. This is important to locate the storage of Nitric Acid containers on board,” the official said.

The Merchant Navy office said the ship's owning company and the insurance companies have agreed to make an interim compensation payment for the salvage operations conducted so far.

Meanwhile, the Maritime and Port Authority of Singapore on Thursday started its own investigation into the massive fire on the chemical-laden cargo vessel, sailing under the country's flag.

Sri Lankan environmentalists have described it as one of the worst ecological disasters in the country's history and have warned of a potential threat to marine life and the fishing industry.

The entire western coastal line has become swamped with the waste from the vessel's fire – mostly plastic beads which are harmful to the marine ecology, experts have said.

The plastic pellets, or nurdles, are used to make other plastic products and are a big source of ocean plastic pollution. Due to their small size, the pellets can be mistaken for food to birds, fish and other marine wildlife.

The coastal area is known for fishing, and mangroves around the Negombo Lagoon -- a major tourist attraction and sensitive ecological spot.