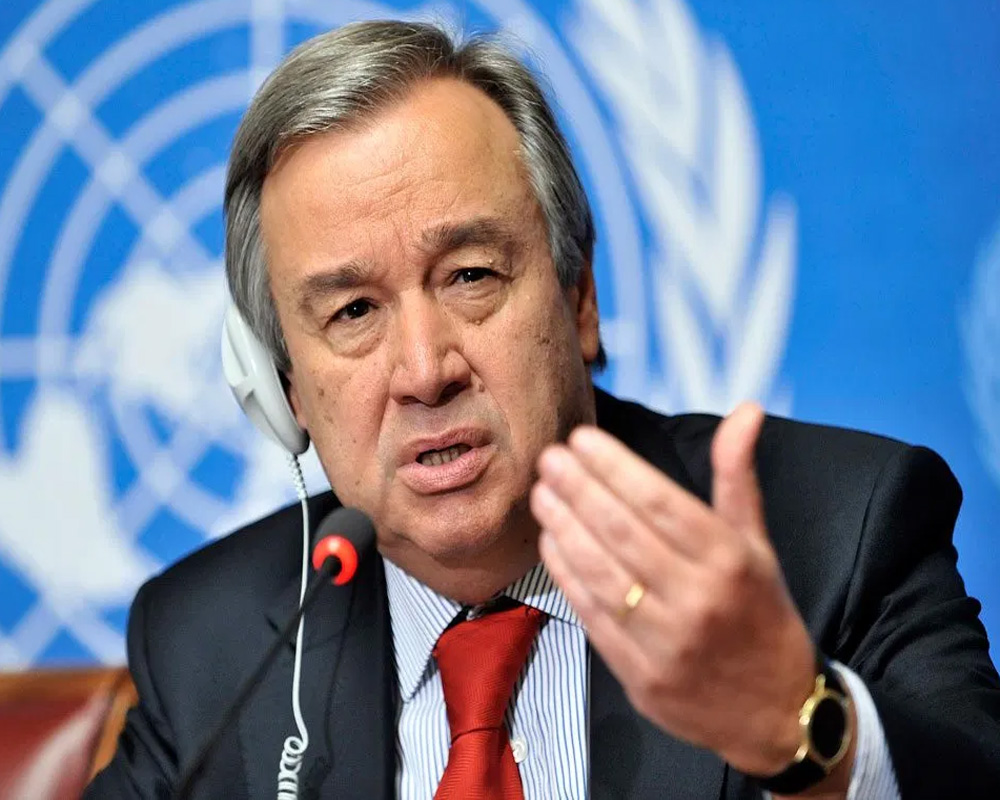 UN chief Antonio Guterres has said that he is appalled by the escalating violence in Myanmar and urged the international community to work collectively and bilaterally to help bring an end to the repression by the country's military.

Secretary-General Guterres also noted with concern that the killing of demonstrators and arbitrary arrests by the military in Myanmar are in clear defiance of calls by the UN Security Council for restraint, dialogue and a return to the democratic path in the country.

Guterres urged the international community to work collectively and bilaterally to help bring an end to the repression by Myanmar's military, a statement issued by the spokesperson for the UN chief said on Monday.

"He urges the military to allow a visit by his Special Envoy as an important element in calming down the situation and setting the stage for dialogue and return to democracy,” it said.

The statement added that Guterres is appalled by the escalating violence in Myanmar at the hands of the country's military.

"The killing of demonstrators, arbitrary arrests and the reported torture of prisoners violate fundamental human rights," it said.

Guterres said he will continue to stand with the people of Myanmar and their democratic aspirations.

The coup sparked protests and other acts of civil disobedience. Around 2,000 people have been arrested and at least 60 protesters have been killed since the military takeover. Media reports said that dozens of people lost their lives, including around 50 on Sunday alone, according to a UN News article.

In a statement on Sunday, Special Envoy of the Secretary-General on Myanmar Christine Schraner Burgener strongly condemned the continuing bloodshed in the country as the military defied international calls, including from the Security Council, for restraint, dialogue and full respect for human rights and fundamental freedoms.

Burgener said she remains in close contact with regional leaders and Security Council members and relied on their continued support towards her efforts to calm the situation.

The Special Envoy has personally heard from contacts in Myanmar heartbreaking accounts of killings, mistreatment of demonstrators and torture of prisoners over the weekend.

“The ongoing brutality, including against medical personnel and destruction of public infrastructure, severely undermines any prospects for peace and stability. The international community, including regional actors, must come together in solidarity with the people of Myanmar and their democratic aspirations,” Burgener said.

UN Special Rapporteur on the situation of human rights in Myanmar Tom Andrews said in a tweet that he is “heartbroken/outraged at news of the largest number of protesters murdered by Myanmar security forces in a single day. Junta leaders don't belong in power, they belong behind bars. Their supply of cash & weapons must be cut now. I appeal to UN member states to heed my call to act.”

The UN children's agency UNICEF said that among those arbitrarily detained are an estimated 700 children.

In a statement on Facebook, UNICEF said the situation in Myanmar continues to escalate alarmingly. As of 11 March, at least nine children and dozens of young people and adults have been killed; at least eight children have been severely wounded and UNICEF's partners estimate over 700 children have been arbitrarily detained.

“Many of those arrested or detained are being held incommunicado, without access to legal counsel, in violation of their human rights. UNICEF condemns in the strongest possible terms the use of force against children, including the use of live ammunition, and the arbitrary detention of children, and continues to call on security forces to immediately refrain from violence and to keep children and young people out of harm's way,” the agency said.

Last week, the Security Council unanimously adopted a Presidential Statement on Myanmar in which it reiterated its deep concern at developments in the country following the declaration of the state of emergency imposed by the military and the arbitrary detention of members of the government, including Suu Kyi. The Security Council reiterated its call for their immediate release.

The Council strongly condemned the violence against peaceful protestors, including against women, youth and children and expressed deep concern at restrictions on medical personnel, civil society, labour union members, journalists and media workers, and called for the immediate release of all those detained arbitrarily. The Council called for the military to exercise utmost restraint and emphasises that it is following the situation closely, the Presidential statement said.

The 15-nation Council expressed its continued support for the democratic transition in Myanmar, and stressed “the need to uphold democratic institutions and processes, refrain from violence, fully respect human rights and fundamental freedoms and uphold the rule of law. ?It encourages the pursuance of constructive dialogue and reconciliation in accordance with the will and interests of the people of Myanmar.”